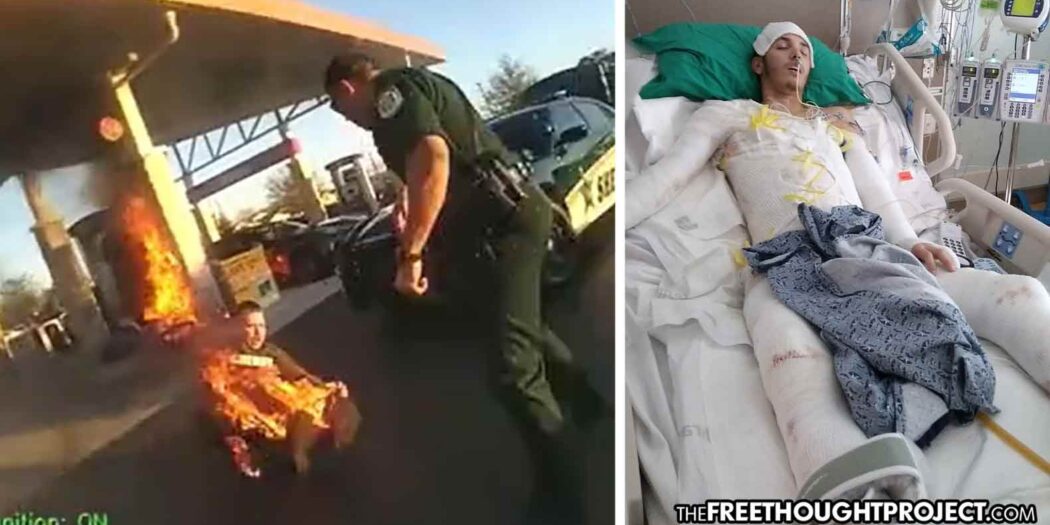 As TFTP reported last week, for the last several months, 26-year-old Jean Barreto has been fighting for his life in a Florida hospital after being set on fire by an Osceola County deputy. Barreto was pumping gas when a deputy deployed a taser, ignited the pump, causing it to explode, and cooked this man alive.

Since that day, the Osceola County sheriff’s department has refused to cooperate with media and attorney inquiries in regard to releasing body camera footage but over the weekend, all that changed and the footage was quietly released. Now, the officer who started the fire, Deputy David Crawford is facing charges as the footage shows the entirely unnecessary use of force which burned a man alive and set two other officers ablaze as well.

Crawford has since been charged with culpable negligence—a misdemeanor. As for his victim, Barreto has yet to face charges, though police are still threatening charges of fleeing law enforcement, reckless driving and resisting arrest—if he survives.

On February 27, Barreto was part of a group of motorcyclists who had gathered in the area. Officers witnessed him pop a wheelie and weave in and out of cars. After seeing him pop the wheelie, police followed Barreto as he pulled into a gas station to fill up his bike.

After Barrett had pulled his motorcycle into a gas station to fill it up, he was approached by deputies who quickly escalated force. The newly released body camera footage shows officers demand Barreto “Get on the ground now!”

As the demand is made, Barreto didn’t have time to comply at which time deputy Crawford deployed his taser. Because officers didn’t allow Barreto to stop pumping gas and put on his gas cap, the struggle causes gasoline to start pouring all over the ground.

Before the body camera footage was released, police said nothing about the taser and never admitted that it was the taser which caused the fire. It was only later revealed through a fire marshal investigation last week that the taser was indeed the cause of the explosion.

As the video shows, Crawford’s negligence lit himself on fire as well as Barreto and two other deputies.

Mark NeJame, an attorney for Barreto told the DailyMail.com that “The sheriff’s office was sneaky” in releasing the video on a Friday evening in an attempt to keep the media and public from catching it — and it worked.

Outside of the Daily Mail, no other corporate media outlet has published the footage.

“At the end of the day, did this young man deserve this? If he survives this his life will be destroyed,” NeJame said. “Part of training curriculum that every law enforcement officer is taught is to determine appropriate use of a weapon. It is obvious that this was not an appropriate environment to use the taser.”

The attorneys criticized the deputies for their response to the incident describing the use of the stun gun as “reckless, foolish, unnecessary and deadly.” They also questioned why “military tactics” were used when Barreto was unarmed and not a threat.

“While being cooked alive, Mr. Barreto sustained third-degree burns on approximately 75% of his body, front and back from his feet to the bottom of his neck,” his attorneys said. “He is wrapped and unwrapped in gauze daily, bleeding profusely still as he doesn’t have the requisite amount of skin to contain his body fluids.”

As we reported, there are no plans for Barreto’s release from the hospital and he’s already undergone six surgeries. He is receiving excruciating treatments that require his dead skin to be routinely peeled from his body. The next procedure is apparently so painful that he will be placed in a medically induced coma before receiving it.

Crawford is also still in the hospital and a Go Fund Me campaign has raised over $21,000 for he and his family.

“Law enforcement cannot break the law themselves in order to enforce it. They are not the judge, jury, and executioner. They have a limited role in our criminal justice system and when they take the law in their own hands, they are the most dangerous,” NeJame said.

“Our client, Jean Barreto, has been cooked alive, by the overzealous, irresponsible, and illegal actions of the Osceola County Sheriff’s office, whose policies, created and promoted by Sheriff Lopez, have led to this and other atrocities within his department. Their actions insult and defame the mostly good members of law enforcement, as much as their reckless policies maim, injure, and kill our citizens.”

Below is the footage, warning it is graphic.