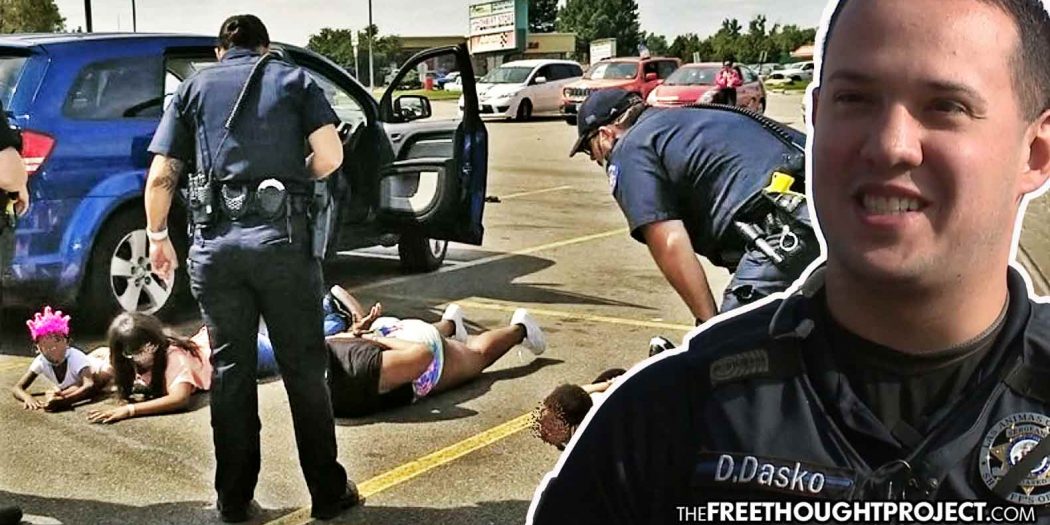 The same department who killed Elijah McClain made the news once again last year—this time for holding an innocent family at gunpoint and forcing them all to the ground because of their own incompetence. The officers were looking for a stolen motorcycle with a single driver and instead pulled over an entire innocent family in an SUV, with a license plate from a completely different state.

Illustrating why police officers can get away with horrific crimes is the fact that none of the officers in that act of terror were charged—despite blatant acts of terrorism against an innocent family—holding children, ages 6-17 at gunpoint and forcing them to the ground.

A ruling in January cleared all the officers involved. Despite the District Attorney’s Office of the 18th Judicial District calling the incident “disturbing,” they decided the officers “acted lawfully.”

“What happened to the innocent occupants is unacceptable and preventable, but that alone is an insufficient basis to affix criminal culpability to the two officers involved in the initial contact,” Clinton McKinzie, chief deputy district attorney in the 18th Judicial District, wrote in a letter explaining the decision, the Denver Post reported.

Sadly, this would likely be the same decision even if the cops had killed a child.

Now, one of the officers involved in this brutal and near-deadly detainment of an innocent family is using his recent fame from the incident as a catapult for his next career move—sheriff.

Aurora police officer Darian Dasko—though he wasn’t fired or charged in the incident—was demoted and suspended. Now, he’s seeking a major promotion. Earlier this month, Dasko submitted his application to run as a Republican for the Las Animas County Sheriff’s seat. He is currently unopposed in the election.

Dr. Thomas Mayes, the vice president of the Greater Metro Denver Ministerial Alliance, told the Denver Channel that Dasko’s decision to run for a position of authority in policing has the black community in fear.

“Two fears: One, fear that they will have a person in charge that has poor judgment when it comes to people,” Mayes said. “My second fear is that the people may elect him knowing that if that reflects the personality of Las Animas, then it’s another place that we [Black people] don’t want to go.”

As we reported at the time, Brittany Gilliam was parked in a nail salon parking lot and was looking on her phone to find another one since this one was closed. As she scrolled down her phone, Gilliam and her family quickly found themselves surrounded by cops, led by Dasko, who ordered them out of the car at gunpoint.

Aurora cops accused Gilliam and all of the children in the car of stealing that car. But there had been no theft and it was police negligence that led to small children being held at gunpoint and forced to the ground.

As CBS Denver reports, Aurora police say they conducted a high-risk stop because of a suspected stolen vehicle. Gilliam’s car had the same license plate number, but wrong state, for the vehicle officers were looking for. Gilliam says her 12-year-old sister and 17-year-old niece were handcuffed while lying on the asphalt of the parking lot. A 14-year-old niece and her 6-year-old daughter were also obeying police commands to lay on the ground.

Police were looking for a yellow motorcycle with Montana plates and mistook a blue SUV with Colorado plates as the stolen vehicle.

“He proceeded to handcuff me and I saw him handcuff the kids, so I started getting angry why are you handcuffing kids for,” Gilliam said.

According to the recently released evidence, police blamed Gilliam’s anger as the reason for further terrorizing the family. Officers Dasko and Moen blamed Gilliam for upsetting the children in their reports.

“Gilliam began screaming and yelling more,” Dasko says in his report, “which made the younger child cry.” Moen concurs that the girls’ emotional state was Gilliam’s fault. Gilliam “began to scream and yell to the occupants on the passenger side making them visually upset,” she writes. “The passengers began to scream and cry.”

In other words, the kids weren’t scared of the cops pointing guns in their faces and forcing them to lie down on the pavement, they were scared, according to Dasko, because their mother was angry this was happening to them. And now this man wants to be sheriff.

“I’m livid. I’m angry,” said Gilliam earlier this year when announcing her lawsuit. “Those kids are not OK. They’re never going to be OK. That was a traumatic experience. Would your kids be OK after that? Having a gun pulled on them and laid on the ground. Especially a 6 year old.”

Naturally, police claimed they did everything by the book and it was a simple typo that led to their stellar officers traumatizing and terrorizing an innocent family. They were just doing their jobs.

It will be the taxpayers who are held liable now—and possibly all the citizens of Las Animas County where Dasko is seeking out his job as sheriff.

As you watch the video below, imagine that this is your family being forced to the ground at gunpoint. Imagine that no amount of innocence and obeying the law could prevent it. Next time someone says, “if you don’t break the law, you have nothing to worry about,” show them this. Then tell them that the cop responsible for this terror is running unopposed for sheriff.