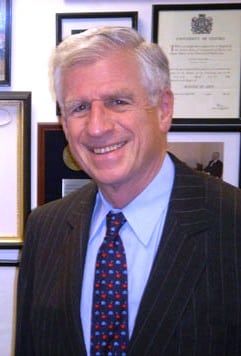 Trump’s attack on the debate commission is an attack on the election itself,” blares the headline from today’s Washington Post op-ed page. That article was written by former senator John Danforth, who has been a member of the Commission on Presidential Debates since 1994. Danforth, an ordained Episcopal priest whose piety earned him the derisive nickname, “Saint Jack,” is one of Washington’s favorite useful idiots of Leviathan. It is no surprise that he would be a permanent fixture on a commission that appears determined to perpetuate the swamp.

Danforth wails in the Post that accusing the debate commission of favoritism “destroys public confidence in the most basic treasure of democracy, the conduct of fair elections” and “paves the way to violence in the streets.” Danforth warns that the “damage to our country is incalculable” if Americans lose faith in “the fairness of our presidential debates, and, in turn, the presidential election.”

The usual Twitter mob quickly affixed a halo over Danforth’s head for his proclamation. But few people remember how Danforth previously appointed himself as the nation’s political faith healer after the biggest federal law enforcement debacle in modern times.

On February 28, 1993, 70 federal Alcohol Tobacco and Firearms agents launched an attack on the home of the Branch Davidians near Waco, Texas. After the assault was rebuffed, the FBI arrived and, on April 19, 1993, sent in tanks that demolished much of the Davidians’ home before a fire broke out. Eighty corpses of men, women, and children were discovered in the wreckage.