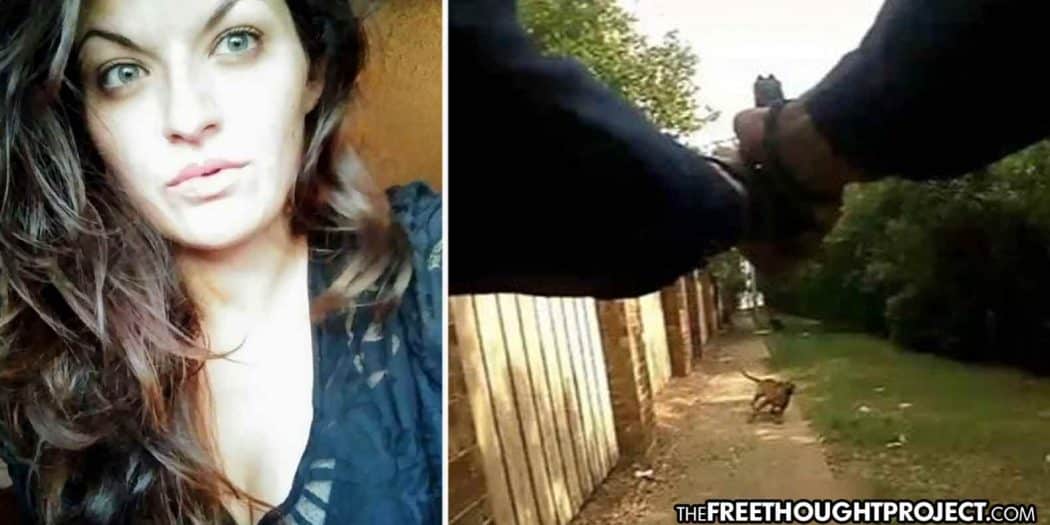 As readers of the Free Thought Project know, police killing or attempting to kill dogs is an all too common occurrence—happening so often that it is caught on video much of the time. Also, as the following tragic case our of Arlington, TX illustrates, all too often, police will attempt to kill a dog—miss the dog—and shoot and kill an innocent person instead.

Last year, a Texas grand jury indicted a police officer after he was seen on video trying to kill a dog and killing an innocent woman instead.

Arlington police officer Ravi Singh was charged with criminally negligent homicide for killing Maggie Brooks, 30, the daughter of an Arlington fire captain. Likely due to the fact that Singh is only facing a maximum sentence of 2 years in jail, on Thursday, the family began seeking justice through civil means in the form of a lawsuit.

“Officer Singh knew that he was firing his weapon in precisely the direction where Ms. Brooks was peacefully lying in the grass,” the seven-page complaint states. “Officer Singh struck Ms. Brooks in the chest causing pain, agony and death.”

According to court documents, the family is seeking over $1 million in actual and punitive damages for wrongful death and for the violation of Brooks’ 14th Amendment rights. The family also hopes that this will lead to change in the Arlington police department policy to prevent further tragedies from taking place.

“Our hope is not only that this officer is held responsible for Maggie’s death, but that the Arlington Police Department is also held accountable for its lack of training and procedures in responding to welfare checks,” the family said in a statement.

As TFTP reported at the time, Brooks’ death was entirely preventable and was the sole result of irrational officer fear coupled with poor judgement and aim.

“It’s a puppy. This is a grown man afraid of a puppy. Who is the paid professional in this encounter? Every child, every mailman, every runner, jogger, bicyclist has dealt with a dog running at them and no one ends up dead. Why do you go to deadly force immediately?” Brooks’ father, Troy Brooks, said at the time Singh was charged.

Singh’s attorney, Kathy Lowthorp, responded to Singh’s arrest with the following statement, blaming the dog and not the cop who killed an innocent sleeping woman.

“Well, when you deal with a dog that’s ready to attack then the person in any one of those careers would have to do what they have to do to protect themselves. And there was malice against the daughter — she was just in the wrong place. The dog should’ve been on a leash.”

This statement rings hollow however, as Brooks’ father pointed out, pizza delivery drivers, package delivery workers, meter readers, and any other number of folks interact with dogs in the public on a regular basis, and do not kill them.

As TFTP reported, the shooting happened at approximately 5:15 p.m. on August 1, 2019. Police were in the area to conduct a welfare check on a sleeping woman who was reportedly passed out in a grassy area near Canton Drive and North Collins Street. That woman was Brooks. Instead of receiving help, however, Brooks received a fatal bullet.

According to police, as Singh approached the sleeping woman lying in the grass, he saw a stray dog. Singh called out to Brooks when all of the sudden, the dog started running toward him, so he fired his weapon several times. The officer missed the dog, but hit the woman instead.

“As the officer called out to the woman repeatedly concerning her welfare, the dog began to run towards the officer while barking. The officer retreated backwards from the running dog while drawing his duty firearm,” police said at the time. “The officer discharged his firearm multiple times towards the dog. After the shots were fired, the woman yelled out and it was apparent she was injured.”

“Oh my God,” Brooks screamed. “The police shot me.”

Brooks was transported to a local hospital where she was pronounced dead. Her three children — ages 9, 11, and 13 — now live with their grandfather, who says this entire situation could’ve been easily avoided.

“Rule number one,” he said. “Don’t kill the citizens.”

It is no secret that police officers are unafraid to put the lives of innocent people in danger and pull their guns out to shoot at dogs. The Free Thought Project has reported on multiple instances in which cops have attempted to shoot dogs and shot men, women, and children instead.

As we reported last year, even their fellow officers aren’t safe from cops attempting to kill dogs.

Officer Lane Butler was rushed to an Indiana hospital because one of her fellow officers pulled his gun on a dog and shot her instead.

According to police, officers were responding to a complaint of criminal mischief on a Tuesday morning in January when the shooting happened. Police were at a woman’s apartment to see if a person wanted on a warrant was inside. Police noted that the woman was cooperative and let officers search her home.

As the officers fled, Wright pulled out his pistol in a futile attempt to defend himself from the dog. Instead of shooting the dog, however, the officer shot Butler in the back as they walked out the door. Butler was wearing a bulletproof vest, but the round went in just above the protected area in her upper back.

After he negligently shot his fellow cop in the back, the department announced that Wright will face no discipline.

While Butler survived this shooting, Brooks and others haven’t been so lucky.

Take for example the tragic case of Autumn Steele.

The tragic incident unfolded in January 2015 as Gabriel Steele, Autumn’s husband, was loading up their 4-year-old son, when Autumn began yelling at Gabriel and the police were called.

Officer Jesse Hill was at the Steele residence acting as an escort in their domestic dispute incident. During this commotion, the couple’s dog came running out of the house.

In the video, we can hear the dog growl, at which point Hill says, “Get your dog.” Only moments later, Hill fired off two rounds.

One of the shots struck Autumn Steele in the arm and another in the chest. The dog was also hit, but he recovered. Sadly, Steele would not recover and died at the hospital. Police and the DA then proceeded railroad Steele’s family as they fought for justice. A tragedy from all sides.