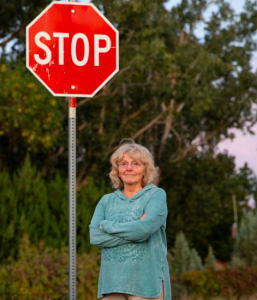 Following a federal lawsuit brought by the Institute for Justice, the City of Richland has ended its practice of unconstitutionally forcing homeowners to upgrade city streets as a condition of obtaining a building permit. As a result of that change, Linda Cameron is free to renovate her Richland home without first paying upwards of $60,000 to upgrade an adjacent city street.

“It is a shame that it took a federal lawsuit for the city to recognize that it was violating its citizen’s constitutional rights,” said IJ Senior Attorney Paul Avelar. “But with this change, Linda and other homeowners are free to renovate their property without having to pay a ransom to the city.”

Linda’s fight started in October 2018, when she decided it was time to renovate the modest one-bedroom, one-bathroom home she had lived in for more than 40 years. She hired a contractor, drew up plans for an additional bedroom and bathroom and submitted a permit application to the city. The city’s building inspector approved her permit as being structurally sound, but the Richland Public Works Department rejected it because it didn’t also include plans to renovate a public street that ran along the back of her property—a street that she didn’t even use to access her driveway. To get her home renovation permit, Richland’s municipal code said Linda also had to improve the city’s street. Linda would have to widen 400 feet of street; build curbs, gutters and streetlights; and add sidewalks that didn’t connect to any other sidewalks. An engineer estimated the changes Linda would have to make at $60,000.

Linda attempted to negotiate with the city, but that was a dead end. The city manager said the law said what it said, so Linda would just have do as she was told. Instead, Linda partnered with the Institute for Justice and filed a federal lawsuit challenging Richland’s imposition of so-called “impact fees” as a condition of getting a building permit. Municipalities may legally charge fees to recoup the impact development has on public infrastructure, but, typically, these fees are imposed on developers to cover the real impacts of new property development. For example, if a developer wants to build a 100-home subdivision, a city could charge an impact fee to recoup the cost of installing new sewer lines or installing traffic signals for increases in traffic.

But when there is no impact, there can be no impact fee. The Supreme Court has explained that impact fees charged without impacts are unconstitutional; indeed, they are little more than extortion. Linda’s case demonstrates why. Linda just wanted to add a second bedroom to her one-bedroom home, but Richland said that before she could, she would have to spend tens of thousands of dollars widening a city street behind her house. It’s obvious that Linda’s second bedroom would not have an impact on the street. The city just wanted Linda to pay for a new street, so it wouldn’t have to.

“If cities want new streets or sidewalks, they can pay for those through normal channels. What they can’t do is force homeowners like Linda to pay for them by imposing unconstitutional conditions on building permits,” said IJ Attorney Patrick Jaicomo. “Thankfully, Richland has agreed to stop that practice. Under its new ordinance, homeowners will be able to once again use and enjoy their property without paying the city for the privilege.”

After the lawsuit was filed, Richland agreed to change its law to impose an impact fee only where there was an impact. After Richland changed its law, Linda’s application was granted without any conditions.  Now, she can get to work on renovating her home and other homeowner in Richland are free from similar treatment in the future.