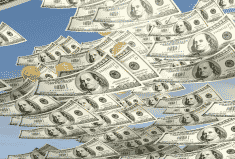 The Senate’s vote to acquit Donald Trump on both articles of impeachment this month brought a much-needed end to the tiring impeachment saga America has been subject to in the last few months.

The impeachment controversy arose when President Donald Trump initially withheld military aid from Ukraine unless President Volodymyr Zelensky provided revelatory information about political rivals such as presidential candidate Joe Biden and his son Hunter Biden’s business dealings. After a whistleblower alleged that Trump may have abused power, the managerial class was off to the races to launch an impeachment inquiry against him. For the past few months, DC pundits have yammered on about the implications of impeachment while the rest of the country has been busy getting on with their lives the way that normal people not living off government largesse do.

Now that the impeachment trial is over, maybe we can actually talk about more relevant issues like foreign aid. For more than seventy-five years, foreign assistance has played an integral role in American foreign policy. In 2019, a total of $39.2 billion was spent on foreign assistance, and at a quick glance it has left a lot to be desired.

School textbooks tend to make foreign aid look like a simple process, but as with anything the government runs, foreign aid has its obligatory share of red tape. Fergus Hodgson of Econ Americas noted that “Little of the development funds trickle down to the target communities,” in explaining why countries like Ethiopia and Haiti remain backwards. More importantly, Hodgson provided an unpleasant depiction of where foreign aid money generally goes:

A confiscatory portion goes to the pockets of federal bureaucrats and U.S. contractors, and another sizable chunk goes to urban, middle-class, or affluent partners in recipient countries. Further, one-fifth of U.S. aid goes through local governments, which tend to be corrupt and incompetent.

As far as the countries where the bulk of foreign aid is going, they’re not necessarily the most institutionally sound. War-ravaged countries such as Afghanistan ($5.1 billion), Iraq ($880 million), and Yemen ($565 million) received substantial aid in the fiscal year of 2018—be it in economic or military form. The first two countries have been subject to US invasions, in which the US government may have spent more than $5 trillion trying to turn them into Western-style democracies. In the case of Yemen, the US has been dragged into a proxy war all thanks to its “special relationship” with the Kingdom of Saudi Arabia. After nearly two decades of nation building, there appears to be no end in sight to American involvement in the region.

Foreign aid is not a get-rich-quick scheme for developing countries. Instead of building wealth, it comes with some not-so-pleasant consequences for the recipient nation. Also, such programs aren’t free. Someone ultimately has to pay for them. At the 2011 Conservative Political Action Conference, former congressman Ron Paul famously declared that

Foreign aid is taking money from the poor people of a rich country and giving it to the rich people of a poor country.

Thanks to a steady flow of outside funding, governments receiving aid no longer have to be accountable to their citizens. Knowing that US taxpayers will bail them out, some governments have no incentive whatsoever to innovate or keep corruption in check. Like subsidizing American banks making bad decisions at the domestic level, giving foreign aid to corrupt governments or factions within a country only encourages bad behavior.

DC has become so detached from the concept of rational economics that it treats the blood and sweat of taxpayers as malleable inputs that can be squeezed out of the population and sent abroad on a legislative whim. All of this is done with complete disregard for the unforeseen consequences that these policies inevitably produce.

Economist Frédéric Bastiat’s essay “That Which is Seen, and That Which is Not Seen” offers various points to consider when approaching the subject of government transfers such as foreign aid. What is seen is the recipient government being propped up thanks to the aid injection, which pleases both the recipient country’s elites and US foreign policy wonks.

However, what is not seen are the potential reform movements that would emerge under normal political circumstances. These movements often hold the key to breaking free of the cycle of corruption and poverty that many of these countries find themselves in. But when foreign aid enters the equation, the establishment government is artificially propped up at reformist factions’ expense. Domestically speaking, foreign aid money is clearly coming from American taxpayers. In an ideal world, this money would be in the hands of American taxpayers and put to use in the private sector. Sadly, most political leaders will never take these concerns into consideration. The signing ceremonies of foreign aid agreements and the subsequent ego boosts are too irresistible to DC do-gooders, so they’ll work diligently to keep the foreign aid gravy train in place.

Let’s not kid ourselves. It is the height of naivete to believe that developing countries will magically become rich via wealth transfers from First World countries. It ignores many of the institutions of freedom—private property and federalism—that enabled countries like the US to become the most prosperous societies in human history. Policymakers will have to think outside the box if they want to see more nations join the ranks of the developed world.

Some Alternatives to Consider

Indeed, there are more practical alternatives to using heavy-handed state measures to help developing countires. First off, bilateral free trade is a much better way to handle the issue of economic development. Expanding trade relations makes sense with regions such as Central America, which stand to benefit from the inflow of North American capital. Increased trade and investment will raise living standards in these capital-starved regions while also providing American consumers and entrepreneurs access to a new market of goods and services.

Another foreign aid alternative to consider is the revival of exchange programs such as the renowned collaboration between the University of Chicago and the Pontifical Catholic University of Chile in the 1950s. This program helped create a new generation of free market economists who would craft the very policies that catapulted Chile into the highest echelons of economic development in Latin America. The exchange program between the two universities still exists, but these efforts could be replicated and expanded to other countries without much state sponsorship.

Neither of these solutions involve dumping foreign aid into these regions or using military intervention to help them. The key to beating poverty from Santiago de Chile to Kinshasa (in the Congo) is still to increase these countries’ capital stock, not confiscate Americans’ wealth and ship it off in the form of foreign aid packages. The only serious way to do this is through policies which reduce regulatory barriers, respect property rights, expand commerce, and otherwise facilitate capital formation.

But this may be too much to ask of Western politicians who are fixated on using the government to solve every conceivable socioeconomic problem they encounter.