Forever War at the End of the World

Forever War at the End of the World 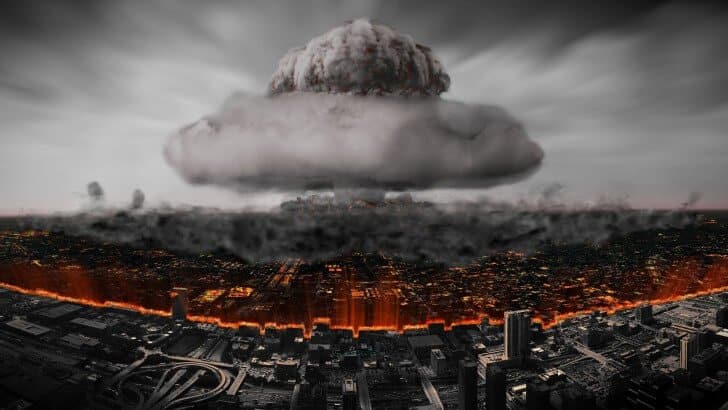 Uncle Sam now has nuclear weapons held to humanity’s head. Washington’s recently released Nuclear Posture Review clarified that launching nuclear weapons in a first strike is indeed on the table, to “achieve U.S. objectives if deterrence fails.” This came after President Joe Biden acknowledged that his administration’s proxy war in Ukraine has brought humanity closer to nuclear “Armageddon” than at any time since the Cuban Missile Crisis.

This month, the Pentagon announced it is setting up a new command, based in Germany, overseeing the training and equipping of Ukraine’s military during its fight with Russia. The command is named Security Assistance Group-Ukraine, or SAG-U. The New York Times reported the command will give the proxy war a “formal structure…roughly modeled on U.S. train-and-assist efforts in Iraq and Afghanistan over the past two decades.” The American people may have largely rejected the “forever wars” of the last twenty years, but the American Empire is eager to launch “long term” conflicts with Russia and China.

A possible reason for the decision to establish this new command may be to obscure the level of funding going to the proxy war, making it more difficult for American civilians and journalists to discern where the money comes from and just how much is being spent.

As Kelley Vlahos, Editorial Director at Responsible Statecraft, has written,

[Dan Caldwell, senior advisor to Concerned Veterans of America] suggests this could allow the Pentagon to carve out a protected fund for the war. “Establishing a formal, named-mission or military task-force specifically for Ukraine could further open the door to moving funding for the war in Ukraine to the Overseas Contingency Operations budget, which is essentially the Pentagon’s slush fund. That could be one of the primary motivations here—the Pentagon wants a steady stream of funding from a source that Congress has shown a lack of willingness to properly oversee.”

This news was paired with the Pentagon’s announcement of yet another $400 million arms package to Ukraine, including tanks and drones. Sabrina Singh, the deputy Pentagon press secretary, told reporters this new command ensures “we are postured to continue supporting Ukraine over the long term.” She added the U.S. remains “committed to Ukraine for as long as it takes.”

Since Russian President Vladimir Putin ordered the invasion of Ukraine in February, Washington has funded Ukraine with over $67 billion, mostly in weapons, a figure greater than Moscow’s entire 2021 military budget. Secretary of Defense Lloyd Austin has said the current policy aims to see Russia “weakened.”

Members of both parties in Congress are reportedly planning another massive aid package for Ukraine that is said to cost as much as $60 billion which would bring total spending on the war to more than $125 billion. This week, the White House requested $37.7 billion in additional funding for Ukraine. Again, this is mostly military aid, and Congress will likely compete amongst themselves to add billions more.

Austin explicitly wants the Russian military crippled and “unable” to fight further wars. Presumably, this would leave Russia vulnerable to invasion apart from Moscow’s arsenal of roughly 6,000 nuclear warheads which can level the United States.

The Raytheon board member turned Pentagon chief has vowed Americans will support and arm Kiev “as long as it takes” to “take back all of the territories” within its “sovereign borders.” This includes the Crimean Peninsula, the Russian controlled areas in the Kherson and Zaporizhzhia oblasts, as well as the Donbas Republics of Donetsk and Luhansk.

Though Austin has explicitly acknowledged that Putin could order a nuclear strike in defense of Crimea and Moscow’s newly annexed territories in Ukraine, Austin has said that he expects Kiev to go on the offensive and promised Americans will provide whatever weapons and supplies they need in the “weeks, months, and years ahead.”

While conceding they have no idea how or when this war will end, U.S. officials reportedly ruled out “pushing or even nudging Ukraine to the negotiating table.” After Russia annexed the above new territories, Kiev’s war aims escalated significantly.

Biden had previously called for regime change in Moscow, but Zelensky signed a decree insisting there will be no negotiations absent regime change. The U.S. has asked Zelensky to drop this policy because it was making Kiev’s Western supporters uneasy, given that the Russians consistently reaffirm that they are willing to engage diplomatically with Ukraine.

On the surface, Kiev has acquiesced and offered their readiness to talk, but only if certain non-starter conditions, including a full Russian withdrawal, were met first.

Zelensky also demanded that Kiev be granted a “accelerated” bid to full membership in NATO, adding Ukraine is already a “de facto” alliance member. This is one of the primary reasons there is a war in Ukraine. For almost two decades, Moscow has made clear to the U.S. that, whether de facto or official, Ukrainian membership in the alliance is the “brightest of all redlines.”

Illustratively, Alexander Venediktov, the deputy secretary of Russia’s Security Council, said “[Kiev] is well aware that such a step would mean a guaranteed escalation to World War III.” He added, the “suicidal nature of such a step is understood by NATO members themselves.”

Maybe NATO is suicidal. The alliance has a ten year plan to rebuild Ukraine’s military and defense industry, shifting all their weapons systems to “NATO-compatible western equipment.” They are making Ukraine “fully interoperable with NATO,” a member of the alliance by “default.”

Americans pride themselves on the value of their democracy, they are willing to allow their government to kill millions of people in the name of exporting such “democracy.” Yet Americans don’t even have a choice, in their own country, when it comes to undeclared wars with nuclear powers. The Democrats are fully supportive of this proxy war policy.

The Congressional Progressive Caucus’ weakly worded letter to Biden which simply asked that his regime make some diplomatic efforts, was slammed even by the likes of Sen. Bernie Sanders (D-VT). The letter was retracted almost immediately.

Beyond the Democrats, “America First” Donald Trump-aligned Republicans in the legislature, like Rep. Mike Waltz (R-FL) are eager to “[go] for the kill.” This summer, Waltz called for overt military advisor deployments in Ukraine.

For months, U.S. special operators and the CIA have been deployed on the ground in Ukraine, carrying out clandestine operations and providing extensive battlefield intelligence to Kiev. Last month, for the first time, the Pentagon revealed that there is a small U.S. troop presence in Ukraine.

Until now, the situation seemed utterly hopeless. The Biden administration is hell bent on bleeding and destabilizing Russia, so it can then take on China. Congress will soon vote on providing Taiwan with $10 billion in military aid to turn the island into a “weapons depot,” preparing for war with Beijing.

Perhaps conflict with China is the impending “big one” the commander of Strategic Command recently referred to when he revealed the war in Ukraine, to him, is just a “warmup.”

However, it is now being reported that for the first time during the war, Washington is exploring diplomatic options. With winter fast approaching as well as the Russian withdrawal from Kherson, U.S. officials reportedly believe Kiev is in a stronger position to negotiate. While Washington assumes this will conversely mean Russia is less willing to talk, Moscow has made clear that is not the case.

As Dave DeCamp, news editor at Antiwar.com, has written:

Some U.S. and Western officials believe this winter will provide an opportunity for diplomacy between Russia and Ukraine as they don’t think either side can fully achieve their goals in the war, NBC News reported on Wednesday, citing anonymous sources.

“In the winter everything slows down,” one Western official said. “The potential for talks, we would like to see that happening.” The report said Western military officials don’t believe that Ukraine can drive Russia out of all the territory it has captured.

Also on Wednesday, Russia announced that it was pulling out of the southern Ukrainian city of Kherson. US and Western officials told NBC that if Ukraine retakes Kherson, it could put the government of Volodymyr Zelensky in a “better position to negotiate.”

The Italian newspaper La Repubblica reported this week that the U.S. and NATO might think peace talks are possible if Ukraine retakes Kherson. The paper said the Western powers are considering diplomacy due to the threat of tactical nuclear weapons being used and the fact that if Russia is defeated in Ukraine, it may become closer to China.

The officials also told NBC that Russia losing Kherson could make Vladimir Putin’s government less likely to talk, but Moscow reaffirmed on Wednesday that it’s open to negotiations. “We are ready to negotiate, of course, taking into account the realities that are emerging at the moment,” said Russian Foreign Ministry spokeswoman Maria Zakharova.

In recent months, there have been significant protests in Italy, France, Germany, the Czech Republic, and elsewhere in Europe. Protesters rail against the skyrocketing inflation and soaring energy prices caused by this proxy war and the sanctions on Russia. These demonstrations cut across the political spectrum, with the left, right, union members, and poor people all expressing severe discontent. “Strikes and protests over the rising cost of living proliferate, ushering in a period of social and labor unrest not seen since at least the 1970s,” the Times reported in October. In Prague, the demonstrators’ slogan was “Czech Republic First.” One speaker said “Russia’s not our enemy, the government of warmongers is the enemy,” according to the Associated Press.

There is now an opportunity for the American people to have their voices heard and force our government to broker a negotiated settlement with Moscow. These are America’s wars. It was the United States that transformed Ukraine into a de facto NATO member last year through bilateral agreements with Kiev managed by the Pentagon and the State Department.

Since the Cold War ended, Washington has been provoking and cultivating these burgeoning conflicts with Russia and China, nuclear armed great powers.

We cannot have a forever war at the end of the world. Our progeny’s future depends on America’s antiwar libertarians, leftists, conservatives, and independents rallying the people and forcing this corrupt, imperial democracy to bend to our will.