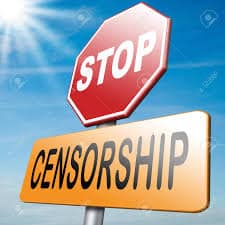 Anyone trying to shut down free speech knows that their ideology is a lie so they must prevent you from exposing that fact. I have no problem listening to someone else’s opinion, especially if I know it’s dead wrong. Knowing that my ideology is moral and non-coercive helps immensely. Free speech has been under attack since the beginning of time by people in power, those who seek it, or by those who just want to control you and your thoughts. It has nothing to do with words on a piece of paper; you are born with the ability to say what you want. The only time an argument could be made that your speech is “damaging” is if you are directing an individual, or group of individuals, to do harm against another’s person or property. Even then the argument could be made that if the people choosing to follow the orders are doing so voluntarily you still could be without blame. When you’re having a conversation with someone about free speech and they say, for example, “hate speech has no right to be spoken and is not free speech,” what do you say? How much do your opinions and beliefs mean to you? If someone says punch all Nazis AND anyone who promotes free speech, how do you address that?

An argument that eventually comes up is the collective stupidity of masses of people. That, if we allow those who are good communicators free reign to preach “wrong think” to multiples of malleable idiots, we could have another Mao, Stalin or Hitler pop up. How is that any different than the system now? Politicians have traded the wacky uniforms of the aforementioned dictators for “respectable” suits and a language of inclusivity. While that may appear to be only fair, it in fact riles up a small minority against the rest who are going about their lives. Where in the past rulers sought to mobilize the larger segment of the population against a minority who they made out to be villains (Jews in Germany, gypsies anywhere in Europe, Native Americans), they now give political power to an alleged oppressed few to demonize huge swaths of the population (“anyone who supports Trump is a white supremacist,” or a “Russian-sympathizer,” effectively putting half of the country in their cross-hairs). And their parrots in the corporate press play cheerleader.

One place the mass of wannabe dictators tries to shut down libertarians is when it comes to “private business.” So, how do they employ this tactic?

Libertarians believe in unfettered markets which means they don’t want a government or any authority with a monopoly on force and law to be able to make rules or regulations that they get to dictate and change at will. The market will always come up with its own rules that will undoubtedly pave the way for progress and innovation. But that doesn’t mean that liberty-motivated people won’t be able to look at the way a company is doing business and criticize them or flat out call them a fraud. That’s just free speech which also has its own checks and balances in a free market. When someone engages in the argument that because Company A is private, therefore you can’t criticize them for, say, firing an employee because they wrote a memo a minority of people found offensive, they are purposefully being dishonest or just plain stupid. A little prodding and it should be evident which.

Imagine this argument in practice. Someone of the libertarian persuasion shops at Auto Shop A and is sold a defective tire that has a blowout after 50 miles. It happened on the highway while travelling at 75 MPH causing their vehicle to veer left sharply almost taking out 2 other cars in the process. Say the consumer goes back to business, informs them of the incident, and the shop-owner says, “Sorry, all sales are final. Neither we, nor the manufacturer are liable to replace or refund tires once they leave the shop.” Granted, the business has every right to have this policy. But if that person took to social media to warn people against shopping at this business citing his experience, some who would wish to play “gotcha” on free speech might inevitably say, “You support unfettered free markets bro, you can’t criticize them for the way they run a private business.” All the while knowing that if it happened to them, they would have a conniption and be spewing venom about how “the free market has failed them.” Of course the libertarian is warranted in warning other people of what he’s experienced. But there are still wannabe-dictators out there who would rather see people crash and die than admit their desire to limit speech is lunacy.

Speech is all about ideas and anyone seeking to limit them is in a very real sense seeking to control your mind. If you’ve ever had the thought, “I can’t say that out of fear of how it will be perceived and the consequences I might face,” it is a prime example of this technique. We’ve even seen people flying the “Libertarian” banner employing these tactics; especially in the “Age of Trump.” It’s sad that many are compelled to not speak their minds or share ideas that may benefit others out of fear that a minority may demonize them. It’s even sadder to see people “promoting” an ideology of liberty joining forces with them.