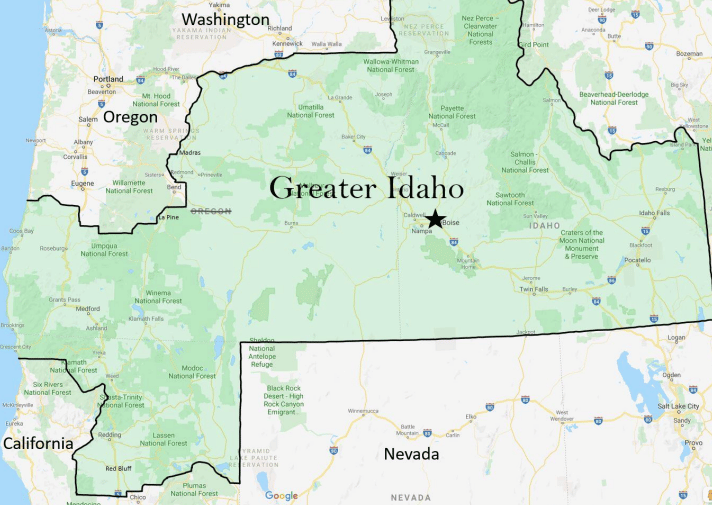 Recently disgruntled residents of rural counties in southwest Oregon have been organizing a petition to move Idaho’s border westward to form a “Greater Idaho” that could also potentially include parts of Northern California. This petition mirrors a recent proposal in Virginia in which rural countries in the state would separate and join West Virginia in protest of Virginia’s latest push for gun control. In both cases, rural residents would have the option of joining states that align more with their cultural and political values.

Although not secession per se, the Oregon/Idaho border readjustment is a sign of the growing discontentment many Americans have with the political jurisdictions they live under. The impulse toward border realignment is to be expected given how some states have cities or metropolitan areas that completely dominate the political scene while the rest of the state is shunned. We observe this with New York City and Chicago: both cities suck up the majority of the political energy of their respective states. Oregon’s rural constituents share the same enmity toward Portland.

Mike McCarter, president of Move Oregon’s Border for a Greater Idaho, pulled no punches when airing his grievances with Oregon politics. He noted that “Oregon is controlled by the northwest portion of the state, Portland to Eugene. That’s urban land, and their decisions are not really representing rural Oregon.”

McCarter continued voicing his political frustrations in a news release: “Rural counties have become increasingly outraged by laws coming out of the Oregon Legislature that threaten our livelihoods, our industries, our wallet, our gun rights, and our values. We tried voting those legislators out but rural Oregon is outnumbered and our voices are now ignored. This is our last resort.” The border readjustment activist conceded that the Oregon Legislative Assembly has its own agenda and that they’re moving forward with it regardless of what rural counties have to say about it.

McCarter’s political desires are not some pipe dream conjured up by fringe political activists. Political players such as Idaho governor Brad Little are ready to embrace McCarter and his colleagues with open arms. In an interview onFox & Friends, Little expressed his sympathies with rural Oregonians:

Although this Greater Idaho proposal would have to go through the typical approval process both at the state and federal level, this effort is another indicator of a profound realignment that is on the cusp of taking place throughout America. Specific developments, such as the county revolt against gun control, are raw manifestations of the pent-up political anxiety many Americans feel toward their governments at every level. Now, they’re expressing their dissatisfaction in a localist manner.

Oregon was one of the first states where local political bodies attempted to stand against state gun control. Second Amendment preservation ordinances were established in eight counties during the 2018 election cycle. Under the voter-approved ordinances, local resources cannot be used to enforce unconstitutional gun laws or regulations if they are first determined to be unconstitutional.

Soon other counties in states such as Illinois, New Mexico, and Virginia followed suit. Even a solidly red state, Texas, has caught a case of the sanctuary resolution fever, as several counties have declared themselves pro-gun sanctuaries. No matter how elites try to spin it, the thirst for local self-governance is strong, and the ruling class may not be able to keep a lid on it.

Regardless of what people think about the Trump presidency, the silver lining of the era has been the shift in the political mindset of many Americans. Doubts about the viability of America’s political union are at an all-time high. Americans of all walks of life are now questioning whether the nation can continue as one cohesive political unit. Milquetoast political commentators will decry American’s growing distrust of politics as a sign of troubled times. The commentariat insists it can somehow channel the national unity of yesteryear to make things right. We’re told it’s the recalcitrant rubes with their parochial ways that are keeping this “unity” from happening.

The believer in radical decentralization has a different view. For them the shifts in political boundaries should be thoroughly embraced. It is the necessary correction that the American polity must undergo to peacefully transition into the twenty-first century after the substantial social engineering of the twentieth century both domestically and abroad. Radical decentralization is one of the key steps in correcting the errors of the previous century.

Although Ludwig von Mises left the physical realm in 1973, his spirit of self-determination lived on in the 1991 dissolution of the Soviet Union, during which numerous republics begin to separate from the latter’s bailiwick and form new nations in accordance with their historical ethnolinguistic groups. Even the Soviet satellite state of Czechoslovakia was able to split peacefully in 1992 in a matter of months.

Unlike his contemporary liberals, Mises uniquely positioned himself as a champion of radical decentralization, which Hans-Hermann Hoppe acknowledged in an interview with the Austrian Economics Newsletter. Although Mises believed in a constitutionally liberal framework, Hoppe pointed out that he had “a unique idea of how government should work.”

In the Misesian context, to check the power of government, “every group and every individual, if possible, must have the right to secede from the territory of the state.” It would be misleading to lump the Misesian prescription with that of failed entities such as the League of Nations, however. Instead, Hoppe made it clear that “villages, districts, and groups of any size” would be leading the charge towards decentralization. This is in line Mises’s bold declaration in Nation, State, and Economy that “The size of a state’s territory therefore does not matter.”

National boundaries and political units have constantly shifted throughout the course of human history. There is no reason for America’s political boundaries to remain static, especially in a generation that has witnessed the collapse of the Soviet Union, the breakup of Yugoslavia, and Great Britain’s recent departure from the European Union.

It’s now America’s turn to carry out the very legacy that Mises left behind.