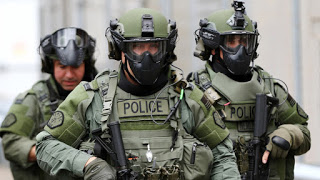 The violence and the utter disregard for basic human rights displayed by the Left in recent years—combined with its support for war crimes when a Democrat is president—have made me inclined to play nice with conservatives these days. At least conservatives aren’t planning to torch my neighborhood any time soon, and at the moment they’re no worse than the Left on foreign policy.

On the other hand, sometimes even the relatively less bad guys (for now) come to some very dangerous conclusions.

Specifically, some authors at conservative publications are now demanding that the president send in federal agents and troops to make arrests and intervene in local law enforcement to pacify rioters in Portland and other American cities. These pundits are claiming that since local officials allegedly aren’t responding with sufficient alacrity to rioters, it’s time to send in federal troops.

It is questionable that the president has the legal authority to do this. But even if he does have this power—legally speaking—basic commonsense principles of subsidiarity and decentralization inveigh against federal intervention. In other words, a basic respect for the principles behind the Bill of Rights and the Declaration of Independence ought to cause one to reject the notion that it’s a good idea to send in federal troops to “solve” the crime problems experienced in American cities.

Here’s one example: in an article titled “It’s Time to Crush the New Rebellion against Constitution” at Real Clear Politics, author Frank Miele claims “the president is designated as the commander in chief” and therefore “shall be expected to act during a crisis of ‘rebellion or invasion’ to restore public safety.”

Arguably, in the former case federal agents would be well within their prerogatives to protect federal property as a security guard might do. This, however, does not necessarily empower them to make arrests or assault citizens outside the federal property itself, on the streets of a city well outside the federal compound. The so-called constitutional sheriffs movement—which the Left hates—has it right on this. Local law enforcement ought to be the final authority when it comes to making arrests.

Clearly, however, Miele will not brook such limitations, and he supports the idea that federal troops can intervene “where no federal property is involved.”

And what are the limitations on this federal power? Basically, there are none, in Miele’s view. So long as we define our adversaries as people fomenting a “rebellion” nothing is off the table. Not surprisingly, Miele strikes a worshipful pose toward Abraham Lincoln’s scorched-earth campaign against the Southern states of the US in the 1860s. Those people were “rebels,” you see, so the president was right to “tak[e] bold action” even if it meant “skirting the Constitution.” Because “there was never any doubt where [Lincoln’s] allegiance lay,” it was perfectly fine when he abolished the basic legal rights of Americans, such as the right of habeas corpus.

The use of the word “rebellion” is central to understanding the profederal position here. Authors like Miele (and Andrew McCarthy at National Review) have routinely used words like “insurrection” or “rebellion” in order to support their claim the current unrest requires a Lincoln-like response, including a Lincolnesque abolition of half the Bill of Rights.

The Moral Case for Local Control, Made by American Revolutionaries

As a legal matter, of course, I have no doubt that federal judges and supporters of federal meddling could find a way to slice and dice the Constitution so as to make it say whatever they want. As a moral and historical question, however, it is clear that sending in federal troops without an invitation from local leaders is blatantly contrary to the provisions of the Declaration of Independence and is contrary to the Tenth Amendment.

As I explained here, the Declaration lists that the misuse of the executive’s (i.e., the king’s) troops was a reason for the American rebellion of 1776. These troops must receive the permission of local lawmakers:

The American revolutionaries and those who ratified the US constitution…thought they were creating a political system in which the bulk of land-based military power would rest in the hands of the state governments. Standing armies were to be strenuously opposed, and the Declaration of Independence specifically condemned the king’s use of military deployments to enforce English law in the colonies and “to render the Military independent of and superior to the Civil Power.” These principles go back at least as far as the English Civil War (1642–51), when opposition to standing armies became widespread.

Thus, any attempt to send in British troops without the approval of the colonial legislatures was an abuse. This same principle was later applied to the state legislatures in relation to federal power.

Sending in federal troops to override local officials is in direct opposition to the moral underpinnings of the American Revolution. But this doesn’t stop Miele, who then insists that Article IV of the Constitution authorizes federal invasions because the text says “The United States shall guarantee to every State in this Union a Republican Form of Government.” According to Miele, the “republican form of government” here “means government of the people, by the people and for the people—not the mob.”

This definition of a republic is something Miele apparently just made up. This is hardly a standard definition of “republic,” especially in the eighteenth century—the context most relevant for our purposes here. In those days, “republic” mostly meant “not a monarchy” and something like a decentralized state ruled by a commercial elite.

The idea that the president can send in troops anywhere whenever we decide that a local government is not guaranteeing a “republic”—based on whatever idiosyncratic definition of “republic” we might choose—is dangerous indeed.

In another example, we find authors Joseph diGenova and Victoria Toensing insisting that “Because state and local Democrat officials refuse to restore order, the federal government must…Enough is enough. Those responsible for this new wave of insurrection must face the full force of federal law. ”

Note the language about “insurrection”—as if a minuscule clash between some left-wing and right-wing demonstrators in Denver—an example the authors use to justify their position—requires a federal invasion.

Specifically, DiGenova and Toesing want federalism thrown out the window, because Michelle Malkin’s supporters were “battered” by baton-wielding thugs before she could deliever a speech in Dener. Presumably governments are expected to intervene to prevent this sort of thing from happening.

But which government shall do that? It’s a safe bet that the authors of the Declaration of Independence would say that a scuffle in Denver clearly lies within the authority of the government in Colorado. After all, the American patriots fought a war—and many died in it—to ensure local control outside the hands of a powerful executive in command of a standing army thousands of miles away.

It is indeed true that the rights of those who wished to see Malkin speak were violated. But here’s the thing: the rights of Americans are violated every single day in every city of America. Murders, rapes, thefts, and even gang warfare are not unheard of across this nation, year in and year out. Moreover, the data is clear that police agencies are really quite bad at bringing these criminals to justice.

So, should we call in the feds to solve these problems? There were more than fifty homicides just in the city of Denver last year. There were many more assaults and attempted murders. Doesn’t this level of bloodshed constitute a sort of “insurrection” against the decent people of the city? Certainly if we’re going to be free and loose with terms like these, as is now apparently the MO of advocates for federal intervention, our conclusion could easily be yes. We might conclude the local police are unwilling to do what it takes to “establish order” and do something about these terrorists and thugs. Will sending in the FBI or the Department of Homeland Security solve this problem?

Fortunately, cooler heads have somehow prevailed, and “sending in the feds” is not a run-of-the-mill policy option. This makes even more sense when we remember that there is zero reason to assume federal cops are better at bringing peace to a city than the state or local officials. These feds are the same people and organizations that have been running a failed and disastrous war on drugs for decades. These are the people who daily spy on law-abiding Americans, in blatant violation of the Bill of Rights. These are the people who were blindsided by 9/11 in spite of decades of receiving fat paychecks to “keep us safe.” These are the people (i.e., especially the FBI) who have conspired against Americans in order to unseat a democratically elected president.

Unfortunately, old habits die hard and the myth prevails on both the left and the right that if we’re not getting the result we want from politicians, then the answer lies in calling in other politicians from somewhere else to “solve” the problem. But just as it would be contrary to basic notions of self-government and self-determination to call in the UN or the Chinese government to “protect rights” in the United States, the same is true of calling in federal bureaucrats to “fix” the shortcomings and incompetence of state and local bureaucrats. The American revolutionaries created a decentralized, locally controlled polity for a reason. Abolishing federalism to achieve short-term political ends is a reckless way to go.