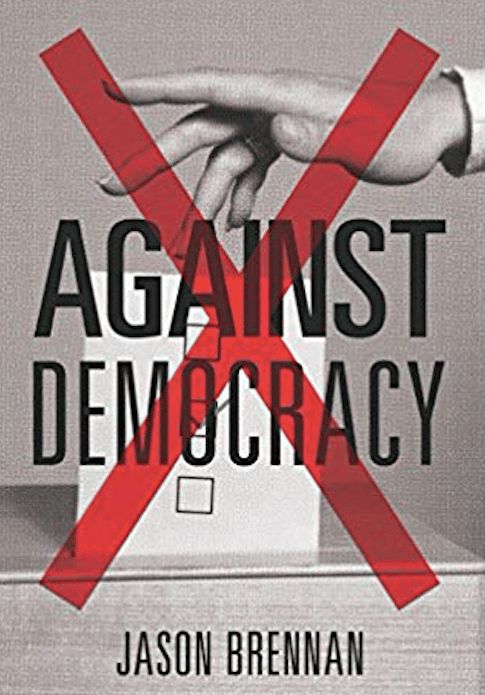 In case you couldn’t tell through the inescapable barrage of media coverage, we have an election coming up, which means voters are mobilizing. To most Americans, democracy and voting are the pinnacles of freedom. Your vote is your voice, etc. etc. 2016 threw a wrench in some Americans’ confidence in democracy, though. Did Trump break the system? Rather than admit that democracy allowed half the country to foist a new leader on the other half against their will, the election had to be explained away: Russia, meddling, the failings of the Electoral College. Democracy works, proponents maintained, it’s just that external forces subverted this particular election. I’m interested to see if these sinister forces can manage to rig back-to-back elections; I guess we’ll see. Someone who’s not so high on democracy is author and Georgetown professor Jason Brennan. His book from 2016, Against Democracy, rejects seemingly every argument in favor of America’s most cherished of political systems.

Growing up in the United States, one gets the impression that democracy is next to godliness. School children put their hands over their hearts every morning and literally pledge allegiance to a flag, and to the republic for which it stands. The NFL spends weeks wearing camouflage hats and jackets on the sidelines as part of their salute to the military; and what does the military do if not protect (and even spread) democracy? Brennan refers to this ubiquitous sentimentality as “democratic triumphalism”: “the view that democracy and widespread political participation are valuable, justified, and required by justice” (7). But, as his book makes clear, almost no one ever really questions the history, justice, and most importantly, the efficacy of a democratic political system. Among several arguments, Brennan’s primary thesis is that democracy is only useful for its instrumental value; it has no real symbolic or intrinsic value. Democracy is a tool, like a hammer, Brennan repeats. It’s only as good as its ability to achieve results. “If we can find a better hammer,” he writes, “we should use it” (11). Brennan’s recommendation is epistocracy: the rule of the knowledgeable.

In the latter half of the book, Brennan offers a clever bit of authorial maneuvering: “In philosophy, we use the least controversial and weakest premise we need to get the job done” (151). This strategy becomes more clear in retrospect when we consider the book’s first major argument: that the American voting public are either hobbits, hooligans, or vulcans (4-5). Hobbits are apathetic, ignorant, uninformed, and lack strong opinions about politics and world events more generally. “The typical nonvoter is a hobbit,” Brennan writes. I find his bit about the “weakest premise” convincing because from the outset of his book, readers will either conjure up their hobbit friends and family and be inclined to agree with Brennan’s premise (most likely), or perhaps readers will self-identify as hobbits and say, “This sounds like me” (less likely). Either way, readers are likely convinced of the usability of the concept. Hooligans, though, are the majority of Americans, those who either vote or participate in politics more broadly. Hooligans are the “rabid sports fans of politics.” They have strong views, though they are based on weak and bias-reinforcing data, and they are unlikely to listen to opposing views, no matter how sound. In fact, debate makes them more entrenched in their views. They want to win and they want their opponents to lose, since to them, politics must be a zero-sum game. Again, even if the reader would believe themselves to be a vulcan (the last category), they can definitely identify these hooligans. Vulcans are essentially Plato’s philosopher-kings, though perhaps we should call them philosopher-voters. They take in all information in an unbiased way, listen to opposing views, and make their decisions based on reputable facts and evidence. We gather that there are not many vulcans out there. If there were, we probably wouldn’t have a democracy.

Especially convincing is the wealth of empirical studies Brennan cites between chapters 1-4. His main findings include the following, among others: most voters are “rationally ignorant,” meaning they know that they don’t know, and they don’t really care that they don’t know (30); the more educated people become, the more they favor smaller government (34); many political participants only “keep up” with politics because they are expected to according to their social class or vocation, or because they would be interested in politics regardless of a particular election or candidate— to them it is a hobby, like crafting or gardening (35-6); political tribalism damages rationality and often causes us to make decisions based on our “group,” rather than the validity of the options themselves (39). The rest of the political literature, to be sure, is expansive. In sum, though, the average voter is: tribalistic, ignorant, myopic, etc., and yet they feel obligated to participate. Voters tend to think of democracy like a poem (chapter 5), in that it has symbolic value (versus instrumental). And this idea, of course, has been reinforced in most Americans since birth. Brennan wonders why this is, or should be so.

More damaging than the voter though is the larger effects of a democratic system in general; Brennan writes “that most common forms of political engagement are more likely to corrupt and stultify than to ennoble and educate people” (55). Believing in the just possibility of ideal democracy is, to Brennan, like believing college fraternities would “improve . . . character and scholarship,” if given the right conditions (73). Shooting heroin or dropping out of high school, he suggests, have the potential to serve an educative function, like ideal democracy, but we doubt the wisdom of trying. Brennan writes elsewhere, “Since individual votes don’t matter and hating other people is fun, voters have every incentive to vote in ways that express their tribal biases” (234, italics in original). Democracy puts us in “genuinely adversarial relationships” where we treat each other in ways that we would never (hopefully) treat one another outside of the political sphere. We think that if “they” win, “I” lose. And, to be sure, the two-party system, with its attendant popular suffrage, does result in this win/lose dichotomy. We have, for the most part, dumb people voting in a rigged system (where their individual votes don’t matter), which results in one party or person being forced on everyone else at the point of a gun (See 240-1). And yet, as Brennan shows, this is supposed to be indicative of “consent,” “voluntary” choice, fairness, and the justice of democracy in general. Brennan suggests, instead, that we try a better hammer: epistocracy (See chapter 8). We want the best doctor, the best plumber, the best teacher, etc., so why don’t we want the best voters and the best rulers? We don’t let just anyone come fix our pipes, so why do we let everyone vote, and, theoretically, let just anyone rule? Democracies violate the “competence principle,” which the author defines as the notion that “high-stakes political decisions are presumed to be unjust, illegitimate, and lacking in authority if they are made incompetently…” (21). As such, democracies are disqualified to rule (On qualifiers versus disqualifiers see p. 165-6). Just as our doctors and plumbers must be competent, so too must our voters and rulers. On Brennan’s suggestion that epistocracy solves some of the issues of political competency, I am somewhat convinced, though Brennan undercuts his argument by never seriously considering anarchism.

Throughout, he talks about how an epistocracy would likely be a “better form” of government, with “better results,” and would, overall, function “better” (See p. 223, paragraph 5 as but one example). But, to my understanding, he never says what “better” means. More efficient at collecting taxes? more adept at keeping the masses docile? better at making war? Brennan would likely say no to all of these, but he never explains what a “better” system or better results are. If he is laissez-faire on economics, as he lets on, and he hates democracy as he explicitly states, then why not suggest or explore something like anarcho-capitalism? I could just as easily suggest the efficacy of this system, and, by his own standards, he couldn’t dismiss this argument by saying “It’s never been tried.” As he says in defense of epistocracy, it too has never seriously been tried, and thus can’t be ruled out a priori. To ignore anarchism is to ignore the base condition of mankind. Why, in Brennan’s world, does man ever come out of their “state of nature” to form society in the first place? And if/when they do, why is it assumed that they form a government? If Brennan convincingly showed why we need the state, only then could he seriously propose epistocracy as the best choice among presumably imperfect political systems. Just as he criticizes most Americans’ assumption that democracy is ideal, and that it works, I would argue that he assumes some kind of government is ideal, and that, theoretically, it can work. But this assumes too much. Nonetheless, Against Democracy is a punchy and prescient tour de force which should be required reading for political philosophy. It’s high time we stop being ruled by hooligans. Brennan calls democracy a “flawed tool” (204), but this doesn’t go far enough. It’s unavoidably antagonistic, it’s violent, and it’s inherently violative of the most basic “political” unit: the individual.