How DACA Became a Political Football

How DACA Became a Political Football 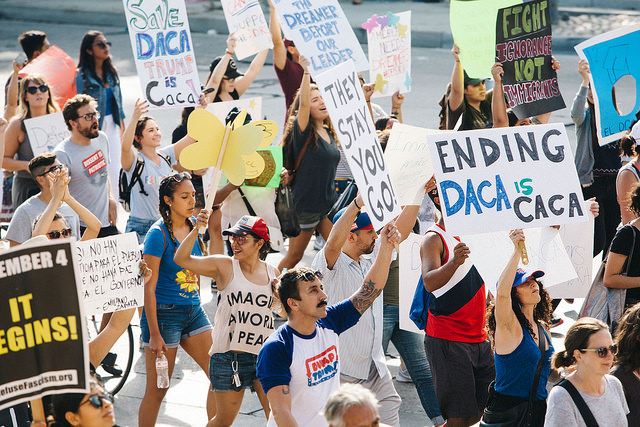 Democrats, Republicans, and regular Americans agree that DACA recipients should be allowed to stay in the US.

In spite of this happy news, the DACA program remains in limbo nearly five months after it was revoked by President Trump. The government also just went through a brief shutdown because Republicans and Democrats in Washington couldn’t come to a compromise on this issue.

Needless to say, it’s not an ideal situation.

The problem is that both parties are more interested in using the plight of nearly 700,000 DACA recipients as political leverage than resolving their issue.

There’s plenty of blame to go around here, but let’s start at the beginning of the program with then-President Obama.

Formerly known as Deferred Action for Childhood Arrivals, the DACA program was initiated by the Obama Administration in the summer of 2012. The program allowed people who came to the US illegally when they were younger than 16 to register with the US government and receive a special legal status. To be eligible for the program, the applicants must not have been convicted of a felony or certain misdemeanors.

The DACA status protected them from deportation and gave them the ability to work, enroll in college, and obtain a drivers’ license. However, it stopped short of giving them a pathway to citizenship or even legal permanent residency. You could think of it as a kind of immigration purgatory. They were no longer illegal and subject to deportation, but they weren’t legal in the way that other immigrants are.

As a strict matter of policy, DACA is a good idea. It would have been better if it allowed a proper pathway to residency or citizenship, but it was still an improvement over the status quo for the individuals affected.

The problem is that the policy was implemented by executive action, not by Congress. This meant that DACA was likely unconstitutional at the outset (and ironically, Obama himself argued as much in the early years of his presidency–before he decided to do it anyway).

But even if we assume DACA was constitutional, passing it by executive action still meant that it could be undone just as easily the next time a Republican was in the White House. This is precisely what happened.

This leads to an unfortunate paradox in Obama’s DACA policy. The ostensible goal of the policy was to provide undocumented immigrants relief from the fear of deportation and a greater degree of certainty. But by implementing the policy via executive action, the future of the program was inherently uncertain.

Indeed, some argue that the DACA recipients are in an even more precarious position now than they were before DACA. Before the program, they were undocumented and would need to be identified in order to be deported. Now, if the protections fully expire, the US government has a detailed profile of each one, which could expedite the deportation process.

These risks were foreseeable from the beginning. Obama decided to implement DACA anyway.

The move offered political benefits to him in the short-term, as it was announced just months before the 2012 election. Meanwhile, the risks to the beneficiaries could only arise in the long-term, after he had left office.

Of course, this doesn’t mean Obama intended for the DACA recipients to wind up in the predicament they are in today. On this issue, we can assume Obama sincerely wanted to help. The point is that it was also in his political interest. And as a rule, politicians don’t mind risking other people’s well-being to promote their own.

President Trump and the Republicans

Next on the list, we have the most obvious contributors to the current DACA problem.

Back in September 2017, Trump’s Attorney General Jeff Sessions announced the end of the DACA program and set an expiration date on the existing DACA protections. If Congress did not act within six months, the DACA recipients would once again become subject to deportation.

The main rationale Sessions offered for ending the program was that it violated the Constitution. Based on my reading, this is probably a correct statement. But it was also hard to take seriously coming from an administration that has been perfectly happy to flout the Constitution elsewhere.

Of course, if the Trump Administration really believed that the main problem with DACA was a matter of constitutional procedure, it would be a simple fix. They could take the program implemented by Obama, reformat it as a piece of legislation, and pass it through both houses with little change.

At first, there was some hope that this direct approach might occur–with Trump publicly calling for Congress to work on a DACA fix.

But ultimately, Republicans opted to use the DACA fix as a bargaining chip to push unrelated immigration policies through the Senate. At the moment, the deal Republicans are offering is a DACA fix in exchange for funding Trump’s wall.

In effect, they are holding the DACA solution hostage until they can extract some type of concession from Democrats. For the GOP, helping the DACA recipients is a means to an end, when it should be an end in itself.

All of which brings us to the Democrats’ contribution to the DACA impasse.

As noted above, the Republican position on this issue is cynical and opportunistic. But the actual terms they’re offering for a deal are quite modest. The wall has always been more of a symbol than a serious policy. And that’s all Republicans are after here: a symbolic victory they can tweet about.

Preliminary details of the wall proposal suggest it would cost around $25 billion in total. Of that amount, $20 billion would go to the wall specifically while the rest would be spent on other border security priorities.

It’s not clear the wall would do much to stop illegal immigration, which has already been declining. From a libertarian perspective, it’s also unclear why curtailing immigration from a Mexico is a high priority in the first place.

It’s best to think of the wall as a large make-work project. The wall is a waste of money, but it’s mostly impotent. And in the scope of the enormous federal budget, $25 billion is sadly a rounding error.

The question here is not whether the wall is a good idea by itself. The question is whether the benefit of fixing DACA–preventing the deportation of peaceful people– outweighs the cost of another useless government project. The answer is clearly yes.

Even The Washington Post Editorial Board agrees with this assessment. In a recent op-ed on the subject, the Post offered a compelling argument for Democrats to take the deal:

“Consider how rare it is that a dumb idea in Congress actually buys something smart in return. In this case, the return on that dumb idea would be huge…

The wall’s $18 billion price tag [an earlier estimate] would be spread over a decade. If a few billion dollars annually is the trade-off that provides certainty — a pathway to citizenship or permanent legal status — for nearly 700,000 young immigrants brought to this country as children by their parents, it’s worth it. Because the alternative — all those lives ruined, all those jobs lost, all that education and promise cut short — is much worse.”

The Post is spot on here. This should be an easy deal for Democrats to accept and sell to their constituents as a victory. But so far, they haven’t been able to do so.

Not surprisingly, their reluctance has more to do with politics than policy. As early as September 2017–the same month Trump decided to end the program–Democratic leaders were already facing criticism from activists in their party for failing to resolve the DACA issue. Around the same time, Democratic leaders were also facing criticism from activists for negotiating with Trump on DACA at all.

Indeed, a week after the initial DACA announcement, Senator Minority Leader Chuck Schumer and House Minority Leader Nancy Pelosi were discussing a deal with Trump on DACA that sounds a lot like the deal that’s still on the table today–border security spending for DACA. For her trouble, Pelosi was actually shouted down at a public news conference.

Clearly, Democratic politicians understand that the deal on the table is a net win for their policy priorities. But, after spending a year characterizing Trump as a uniquely evil and illegitimate president, it’s hard for them to publicly agree with Trump on much of anything.

So we remain at an impasse. Republicans insist on getting concessions for fixing a problem they helped create. And Democrats refuse to accept a reasonable trade-off for fear it may jeopardize their anti-Trump bona fides in upcoming elections.

Meanwhile, time is quickly running out for the DACA recipients. Will their well-being be sacrificed on the altar of political expedience?