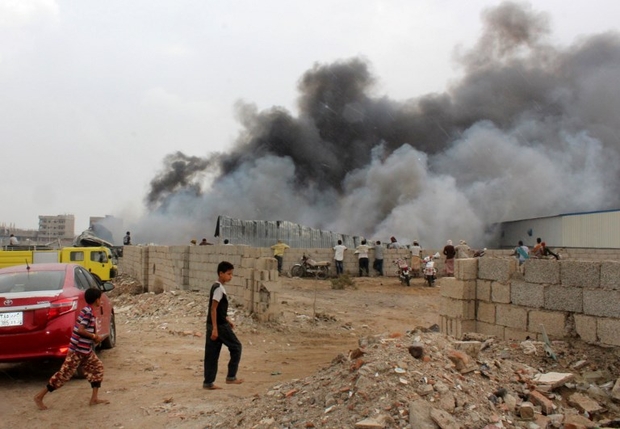 Smoke rises from inside a military camp the day after fighters from the separatist Southern Transitional Council took control of the pro-government position in the northern Dar Saad district of Aden on January 31, 2018. / AFP PHOTO / SALEH AL-OBEIDI

Saudi Arabia often takes the most criticism for Yemen’s crisis, in light of its devastating bombing campaign. But the United Arab Emirates is attracting increasing scrutiny for actions that are tantamount to war crimes in the country.

Since the Saudi-led coalition launched its war in Yemen in March 2015, the UAE has been a key player. Yet, while Riyadh’s goal has been to restore President Abd Rabbuh Mansour Hadi to power and crush the Houthi uprising, Abu Dhabi has focused more on the south, training security forces to secure its own geopolitical ambitions.

The UAE’s long-term goals have become increasingly clear: to divide Yemen and create a friendly southern state, which would secure trade routes through the port of Aden to the rest of the world; to exploit Yemen’s natural resources; and to empower itself as a regional hegemon.

To justify its presence in Yemen, the Emirati regime is fixated on presenting itself as a force for stability. It often highlights charitable donations of humanitarian aid to the country, while dismissing reports of its role in unlawful detention practices as “fake news“.

Read the rest at middleeasteye.net.