President Trump was elected on an anti-trade agenda in 2016, and promised that tariffs and protectionist measures could restore the US manufacturing sector. After winning the White House, the president imposed tariffs on hundreds of billions of dollars worth of Chinese goods meant to discourage imports in pursuit of this goal. He has described himself as a “tariff man” and said that “trade wars are good and easy to win.”

How is this rhetoric holding up?

“Another goal—reshoring of US factory production—hasn’t happened either,” the Journal continues. “Job growth in manufacturing started to slow in July 2018, and manufacturing production peaked in December 2018.”

This graph shows pretty clearly that Trump’s tariffs did not successfully promote employment in the manufacturing sector. Much of the manufacturing job gains that did occur during the president’s tenure happened before the tariffs even took effect. 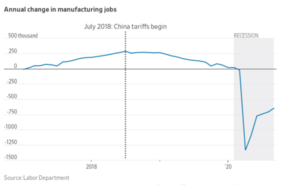 This news is dismaying, but it’s hardly surprising.

Economists overwhelmingly agree that tariffs, which are basically taxes on American consumers, don’t work. In a 2016 survey of economists, zero agreed that adding tariffs on certain goods would successfully encourage domestic production. A whopping 93 percent disagreed or strongly disagreed, while 7 percent did not answer.

“Tariffs that save jobs in the steel industry mean higher steel prices, which in turn means fewer sales of American steel products around the world and losses of far more jobs than are saved,” famed free-market economist Thomas Sowell explained in one example of how tariffs backfire.Populist-sounding politicians can boast about ‘protecting American jobs’ and seem to the untrained eye to be telling the truth.

“The benefits of a tariff are visible,” Nobel laureate Milton Friedman similarly noted. “Union workers can see they are ‘protected.’ The harm which a tariff does is invisible. It’s spread widely. There are people that don’t have jobs because of tariffs but they don’t know it.”

This is why populist-sounding politicians can boast about “protecting American jobs” and seem to the untrained eye to be telling the truth.

Yet as economists agree, the problem with tariffs generally speaking is that they kill more jobs than they create. For every job that is “protected” by a tariff, other jobs are lost in related industries that use the targeted good as an input and see their costs raised. But even within the manufacturing sector, these tariffs failed.

Why? It’s simple: The tariffs helped some manufacturers by hurting others via raised prices, and (predictably) triggered retaliatory tariffs from China that together outweighed any benefits.The problem with tariffs generally speaking is that they kill more jobs than they create.

“An industry-by-industry analysis by the Federal Reserve showed that tariffs did help boost employment by 0.3%, in industries exposed to trade with China, by giving protection to some domestic industries to cheaper Chinese imports,” the Journal reports.

“But these gains were more than offset by higher costs of importing Chinese parts, which cut manufacturing employment by 1.1%,” the analysis continues. “Retaliatory tariffs imposed by China against US exports, the analysis found, reduced US factory jobs by 0.7%.”

Many Americans of good faith might be earnestly surprised by how tariffs have failed to restore the manufacturing sector. But students of economics shouldn’t be.

This article was originally featured at the Foundation for Economic Education and is republished with permission.