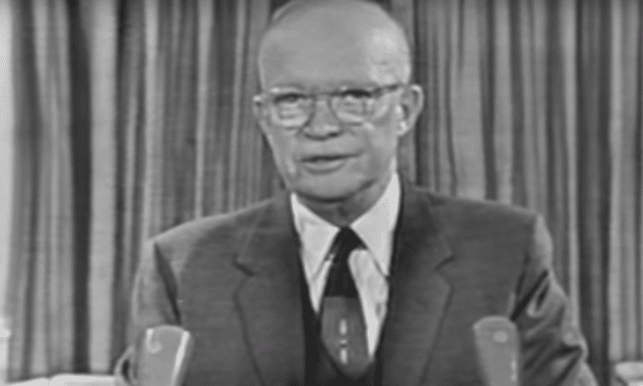 As Eisenhower predicted, there is no balance left, as U.S. policy is reduced to who we threaten, bomb, or occupy next.

January 17 marks the 59th anniversary of President Dwight Eisenhower’s farewell speech to the nation. After eight years in the White House, just three days before John F. Kennedy would be sworn in as his successor, Ike went on national television and touched on many topics, from promoting the economy to working with Congress.

Yet the heart of his speech was a finely chiseled critique of what he dubbed the “military-industrial complex.” This criticism was all the more remarkable, of course, because Eisenhower had been a career military man. Having graduated from West Point in 1915, he had served in the U.S. Army for more than three decades, through two world wars, ultimately rising to the rank of five-star general.

Yet on January 17, 1961, Ike said: “Our military organization today bears little relation to that known by any of my predecessors in peacetime, or indeed by the fighting men of World War II or Korea.” He continued: “This conjunction of an immense military establishment and a large arms industry is new in the American experience. The total influence—economic, political, even spiritual—is felt in every city, every statehouse, every office of the federal government.”