Iowa Governor Seeks Review of Officials Who Worked for Saudis

Iowa Governor Seeks Review of Officials Who Worked for Saudis

Iowa governor Kim Reynolds yesterday announced that her office has asked the Iowa Ethics and Campaign Disclosure Board to review the case of two current state officials who did political work for Saudi Arabia at the same time they held important government positions.

Connie Schmett and her husband Kim Schmett earned $101,500 working for Saudi Arabia against a federal law that cleared the way for 9/11 victims to sue the kingdom for its alleged support of the September 11 plot.

The governor’s move follows original reporting by 28Pages.org, followed by Associated Press, that Connie Schmett allegedly used deceit to persuade Air Force veteran Dustin DeMoss to travel to Washington and lobby for changes to the Justice Against Sponsors of Terrorism Act (JASTA).

Reynolds’ predecessor, governor Terry Branstad, appointed Connie Schmett to the Health Facilities Council and the Cultural Trust Board of Trustees, and Kim Schmett to the Employment Appeal Board, which he chairs. He earns $80,000 a year in that role.

At a press conference, Reynolds told reporters she didn’t think state employees should be permitted to work for foreign governments. “If you’re working for the state, or a public official, it would be a conflict of interest to serve in that capacity,” she said. “I think it’s something that the legislature needs to look at. It appears that it’s possibly a loophole in the statute.”

Asked if she was “ok” with what the Schmetts did, Reynolds said she had no power to immediately remove the Schmetts from their posts. “The Schmetts don’t serve at the pleasure of the governor. They serve a set term and that’s determined by statute,” she said.

The Schmetts, who are powerful players in Iowa Republican politics, hosted a $75 per person fundraiser for Reynolds on Sept. 20. A reporter asked if Reynolds had been aware of their work for Saudi Arabia at the time. “No, I was not,” she replied.

The governor acknowledged having received a $100 donation from the couple. Reynolds said she would forego a decision on possibly returning the money until after she’s received the results of the ethics investigation.

Reynolds distanced herself from what Saudi Arabia was seeking to accomplish in its massive lobbying effort: preventing 9/11 families from proceeding with their suit. “I don’t agree with that,” she said.

Yesterday, Bleeding Heartland reported that Kim Schmett failed to make a required disclosure of political contributions when he registered with the Department of Justice as a Saudi agent.

Attempting to defend his work against 9/11 victims and for a dictatorial monarchy that is far and away the world’s principal exporter of terror, Schmett told Bleeding Heartland, “I’m not representing someone who’s un-American.”

Meanwhile, Ryan Foley of Associated Press reported that Kim Schmett failed to disclose his Iowa government position on the same registration. Earlier, we learned that Connie Schmett failed to reveal her work for the kingdom on her 2016 Iowa financial disclosure.

When I called Connie Schmett in September before publishing the story that would ultimately lead to this week’s announcement of an ethics investigation, she attempted to prevent my reporting through intimidation—specifically, with threats of baseless litigation. She told me, “I do not give you permission to write an article about me and if you do, you will hear from my lawyer. You’ll be sued!”

Veteran DeMoss said Schmett never informed him that she was working on behalf of the Saudi government, nor that that kingdom would be paying for his airfare and lodging at the pricey Trump International DC. “I understand the reason she couldn’t be honest and upfront, because if she had been, I wouldn’t have gone on (the trip),” said DeMoss.

He didn’t learn that Saudi Arabia was orchestrating the entire effort until he was in Washington, where he and dozens of other veterans had been brought to lobby members of Congress.

When DeMoss later confronted Schmett with new-found knowledge of her registration as a foreign agent, she begged him to keep it secret. “PLEASE don’t share it. I’ll be in BIG trouble!” she wrote in a Facebook message.

With this week’s developments, it appears “big trouble” has arrived.

A Strange Twist of Fate?

That trouble may have all started with a bizarre case of mistaken identity, as Connie Schmett sought military veterans to volunteer for the Saudi-backed campaign to weaken JASTA.

Her recruitment of Air Force veteran Dustin DeMoss began with a Dec. 20, 2016 email that opened with “very good visiting with you yesterday.” DeMoss, who lives in Oklahoma, was perplexed: He said he’d had no previous contact with her.

There is, believe it or not, another veteran named Dustin DeMoss. He’s a retired Army NCO in Knoxville, Iowa and he’s “friends” with Connie Schmett on Facebook. (The Oklahoma DeMoss said Schmett said she was related to DeMoss’s.)

Did Schmett somehow mistype the email address of one Dustin DeMoss and—against all odds—accidentally recruit another Dustin DeMoss who just happened to be a military veteran? If so, at the time she must have thought it a wild stroke of lucrative luck.

Now that the Oklahoman’s disturbing account has directly led to Connie Schmett’s embarrassment of the Republican governor, bad press in local, state and national media, and a high-profile ethics investigation of herself and her spouse, she surely doesn’t think that today.

Reprinted with permission from 28 Pages. 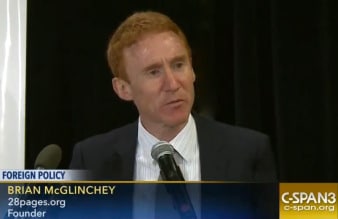