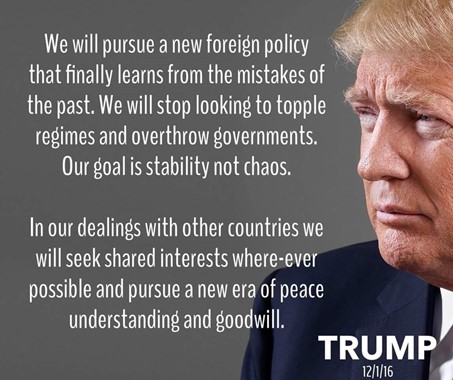 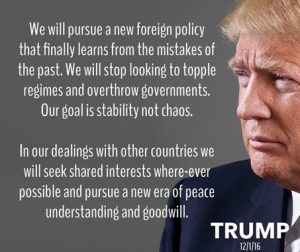 It has been just over a week since I last wrote to you, at the time just before Trump’s Venezuela regime change operation hit the mainstream media. I warned that his recognition of an unelected politician as president and his dedication to install that politician with violence if necessary would constitute the worst mistake of his presidency.

Since that time, Trump, through his neocon proxies, has doubled down on his Venezuela regime change plan to the point where the US is seizing Venezuela’s assets and channeling millions to the unelected opposition in the hopes that with a US cash infusion Washington’s regime change plans can become facts on the ground in the country. Of course for that to happen, it will require massive amounts of bloodshed, as regime neocons are already touting what they claim are opposition supporters on the street as evidence their regime change operation is legitimate and supported by “the people.”

But even if their photos are not manipulated and altered by those forces and institutions working on regime change (like the CIA, which has been dedicated to the overthrow of the Venezuelan government for at least the past 17 years), do thousands of people in the streets constitute a legitimate mandate in the “international rules-based order” so often cited by the interventionists? What of the thousands of us who demonstrated that freezing day in late 2002 against the Bush Administration’s march to war in Iraq? So we don’t count according to them?

As a long-time regime-change watcher, I’ve never seen such a blatant and open US overthrow of a foreign government. Bolton and his neocons obviously feel so confident that they can pull the wool over Trump’s eyes that they don’t even try to justify their efforts on national security or even “humanitarian” intervention grounds. And they are moving at a frenzied pace, no doubt emboldened by not a whimper of protest from the “opposition” party in Washington, which is in fact just the left wing of the war party.

The leaders of this regime change have oceans of blood on their hands from all the horrific “liberations” they have pushed in the past, but shockingly no one seems to be asking questions. As neocon Secretary of State Mike Pompeo said: “Now it is time for every other nation to pick a side. No more delays, no more games. Either you stand with the forces of freedom, or you’re in league with Maduro and his mayhem.”

For those who cannot remember recent history, this is a re-statement of the disastrous Bush policy as crafted by the neocons, “Every nation, in every region, now has a decision to make. Either you are with us, or you are with the terrorists.”

What will be conveniently lost in the rapid pace of the neocon and media spin machine on Venezuela will be the original legal grounds upon which the US has based its case that opposition politician Juan Guaido is in fact the president of Venezuela. RPI Academic Board Member and long-time regime-change observer John Laughland has written a very important article reminding us that the legal basis of the US (and EU) recognition of Juan Guaido as president of Venezuela is not only a stretch of the Venezuelan constitution: it is a bald-faced lie!

The resolution voted by the European Parliament is actually worse than President Trump’s ‘recognition‘ of Guaido on January 23. Four political groups in the European Parliament, acting independently of one another before later agreeing on a common resolution, sat down to formulate their texts, in legal language, which state that Juan Guaido is the legitimate president ‘according to Article 233 of the Venezuelan constitution.’
…
No one who has ever read Article 233 of the Venezuelan constitution could possibly conclude that it says anything of the kind.

On the contrary, Article 233 is precisely what Juan Guaido violated when he performed his little stunt of proclaiming himself president in a public square in Caracas on January 23.

Most countries’ constitutions have articles like Article 233 of the Constitution of the Bolivarian Republic of Venezuela. It deals with what happens if the president of the Republic does not, or cannot, fulfill his duties.

It lists six circumstances in which his term can be cut short: if he dies; if he resigns; if he is removed from office by a ruling of the country’s supreme court; if he is proclaimed physically or mentally unfit after a formal medical procedure validated by the National Assembly and by the supreme court; if he abandons his office; or if he is impeached by a popular referendum.

Not a single one of these conditions has been fulfilled: President Maduro has not resigned; he is not dead or unfit; he has not been impeached by the courts or by the people. Worse, Article 233 goes on to say who takes power if the presidency falls vacant – which it has not – and, guess what? It specifies that it is the vice-president who takes over, in this case Mrs Delcy Rodriguez, not the president of the National Assembly (Guaido).

Remember this well, because it is being dumped down the memory hole. The legal basis upon which the US and EU make their regime-change claim is as bogus as Saddam Hussein’s “mobile chemical weapons labs.” That’s why they don’t want you to even think about it. Now, it’s all about the “crowds.”

The illegality of US claims as justification for recognizing as president an individual who has not earned a single vote to be president is being furiously buried under the new pack of propaganda lies that “the people” are with the opposition in favor of regime change.

See the bait and switch? It’s a little depressing to have to point out yet again that the neocons are lying us into war and the media is going along unquestioningly. You’d think Americans might have learned after Iraq and Libya and Syria and so on and so on.

They are lying again. And doing it more openly than ever.

What to do? As 2018 RPI Conference speaker Caitlin Johnstone advises, do not allow yourself to become a Pro Bono CIA Propagandist. As Caitlin says, it may actually be more moral to be the ones sent in with the guns to make “regime change” happen than to be the propagandist who acts as a conveyor belt for regime change propaganda. As she says, “In the end, the one with the gun is just delivering the bullet that was put in the mail by the propagandist.”

Bolton, Pompeo, and Elliot Abrams are playing for keeps in Venezuela, and they have much of the Democratic party “opposition” on their side. They can dial up the violence at will and have demonstrated that they have no concern about international law or the campaign promises of their president (see above). They are also not averse to using outright lies to push their agenda. Truly Trump has lost control of his presidency and into the intellectual void left by Trump’s lack of a principled view of the world and the United States’ place in it piles in the neoconservatives who have a very good idea what they want to do with the world. They want to burn it down.

Mark my words: If Bolton and the neocons succeed in “liberating” Venezuela, five years down the road they will be in the same boat as the Ukrainians are five years after their “liberation.” Their lives are more miserable and they cannot even get hot water.

Forget the “people in the street” propaganda. This is a blatant US coup against a sovereign nation. Particularly hypocritical is that while the US has been crippled for two years over unproven allegations of foreign meddling in our elections, all parties in Washington agree in an overt overthrow of the electoral process overseas.

With this regime change, we can likely stick a fork in Trump. He is totally owned by the neocons. It was fun to think of a non-interventionist in the White House while it lasted.