Is Anarcho-Capitalism A Contradiction?

Is Anarcho-Capitalism A Contradiction? 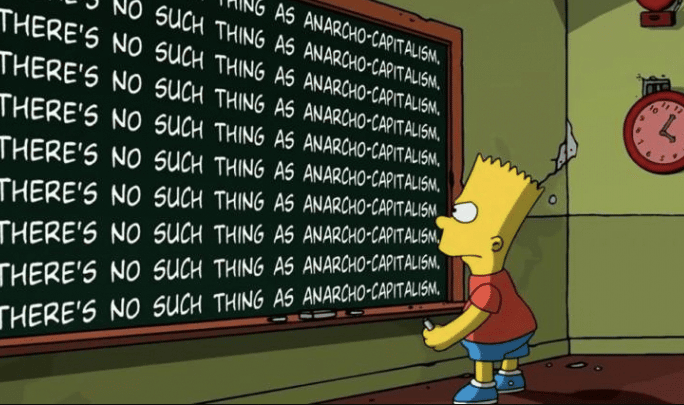 Is it possible for a stateless society to adequately protect property rights?

Any Rothbardian anarcho-capitalist has no doubt been confronted with the assertion that a state is necessary to enforce the property rights so vital to a market-based, capitalist system.

Before proceeding any further, its imperative to establish what we mean when describing “the state.”

In a brilliant 1974 lecture entitled “Society Without a State,” presented online here, Murray Rothbard laid out a concise definition:

“Let me say from the beginning that I define the state as that institution which possesses one or both (almost always both) of the following properties: (1) it acquires its income by the physical coercion known as “taxation”; and (2) it asserts and usually obtains a coerced monopoly of the provision of defense service (police and courts) over a given territorial area.”

Rothbard further refined his description in describing the state as an organization, that by its use of physical coercion, “has arrogated to itself a compulsory monopoly of defense services over its territorial jurisdiction.”

The State Is Coercion

Such protection however, requires police, investigators, courts, prisons and judges. How are these services to be funded? Via taxation, they’ll concede.

However, the aggression used by the state to collect taxes violates the very theft the state is supposedly established to protect against. Intellectual consistency leads us to conclude that the state cannot simultaneously protect us from theft while committing it.

Even those who believe in free, competitive markets as being the most moral and efficient method of production and exchange for all other goods and services, will nevertheless maintain that the state must provide a system of law enforcement and courts to carry out the protection of rights – including property rights.

In his essay, Rothbard begs to differ. “But it is certainly conceptually possible for such services to be supplied by private, non-state institutions, and indeed such services have historically been supplied by other organizations than the state.”

He continues, “My contention is that all of these admittedly necessary services of protection can be satisfactorily and efficiently supplied by private persons and institutions on the free market.”

To be clear, Rothbard is not naïve in his thinking, acknowledging that “mankind is a mixture of good and evil.” There is no utopian vision of a stateless society in which bad actors and aggression magically become extinct. He persuasively makes the case however, that voluntary arrangements for security and criminal justice would not only be fairer and more efficient, but tend to minimize “both the opportunity and the moral legitimacy of the evil and the criminal” with the removal of the state’s monopoly on violence and provision of defense services.

Beginning with security, we already see a robust system of private security being enlisted by businesses and individuals to protect their property, in no small part because the current system of government policing is not up to the task.

We can look to the city of Detroit, in which last year it was reported the city has seen massive increases in private security companies providing protection because local citizens and businesses have lost faith in the government to keep their persons and property safe.

For those who can’t afford to pay directly for security, Rothbard wrote, widespread and affordable protection services could “be supplied by insurance companies who will provide crime insurance to their clients.”

“In that case,” he continued, “insurance companies will pay off the victims of crime or the breaking of contracts or arbitration awards and then pursue the aggressors in court to recoup their losses. There is a natural market connection between insurance companies and defense service, since they need pay out less benefits in proportion as they are able to keep down the rate of crime.”

As Rothbard demonstrated, understanding how society could transition to exclusively private security should not be that intellectually challenging.

Why Not Markets in Criminal Justice?

This leads us, however, to the somewhat more difficult case of how to replace the government court system. In his essay, Rothbard asserts that “any society, be it statist or anarchist, has to have some way of resolving disputes that will gain a majority consensus in society.”

When protection agencies catch a criminal who has committed, or is in the act of committing, aggression against another’s person or property, there must a system in which victims can recoup their losses and/or ensure the perpetrator receives appropriate punishment. For this, Rothbard argued, a system of private, voluntary arbitration courts will suffice.

Indeed, Rothbard cites a 1970 book written by the Harvard and University of Virginia educated legal scholar William C. Wooldridge entitled “Uncle Sam, the Monopoly Man.”  Even in 1970, Wooldridge wrote that “Arbitration has grown to proportions that make the courts a secondary recourse in many areas and completely superfluous in others.”

Again, just as in security, the market has been providing arbitration services to supplement the government court system’s shortcomings.

Critics may object Rothbard wrote, “that arbitration only works successfully because the (government) courts enforce the award of the arbitrator.”

“Wooldridge points out however, that arbitration was unenforceable in the American courts before 1920, but that this did not prevent voluntary arbitration from being successful and expanding in the United States and in England,” he continued.

Moreover, as Rothbard highlighted, Wooldridge pointed out “the successful operations of merchant courts since the Middle Ages, those courts which successfully developed the entire body of the law merchant. None of those courts possessed the power of enforcement.”

“In other words, private arbitration is, and has been for generations, successfully settling disputes,” Rothbard concluded.

The market process, Rothbard added, would ensure the most trustworthy arbitrators would rise to the top. “As in other processes of the market, the arbitrators with the best record in settling disputes will come to gain an increasing amount of business, and those with poor records will no longer enjoy clients and will have to shift to another line of endeavor,” he wrote.

But how would the system of courts in a free society be funded?

“Courts might either charge fees for their services, with the losers of cases obliged to pay court costs, or else they may subsist on monthly or yearly premiums by their clients, who may be either individuals or the police or insurance agencies,” Rothbard argued. Entrepreneurial ingenuity and technological advancements would also produce funding mechanisms yet to be imagined.

Rothbard’s essay serves as an outstanding introduction to the provision of security, law and courts in a stateless society. The enforcement of private property rights, contrary to anarcho-capitalist skeptics and critics, can indeed be capably handled through voluntary market exchanges. No corrupting and coercive influence of the government is needed.