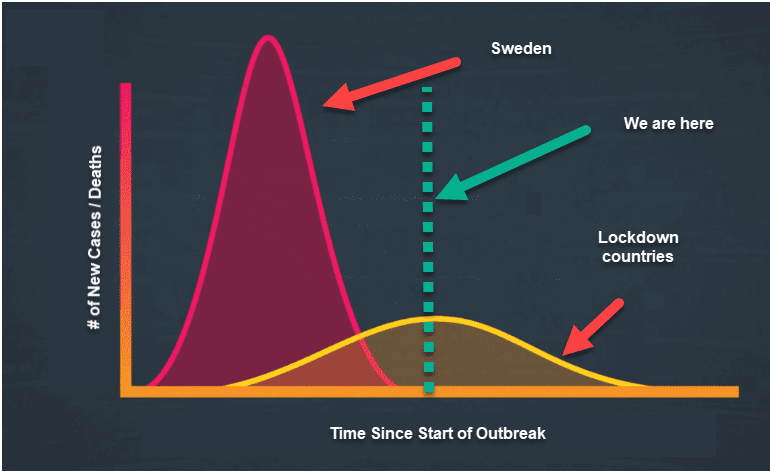 In the ongoing debate about lockdowns in the US, Sweden has become the battleground.

To mainstream media outlets, Sweden’s experience is cited as a cautionary tale. CBS writes that Sweden has become “an example of how not to handle COVID-19”.

Meanwhile, to those who have been skeptical of the lockdown policy all along, Sweden’s results are occasionally cited in glowing terms. For instance, Jeffrey Tucker of AIER tweeted this out last week, showing that Sweden’s daily death toll has slowed to a crawl: 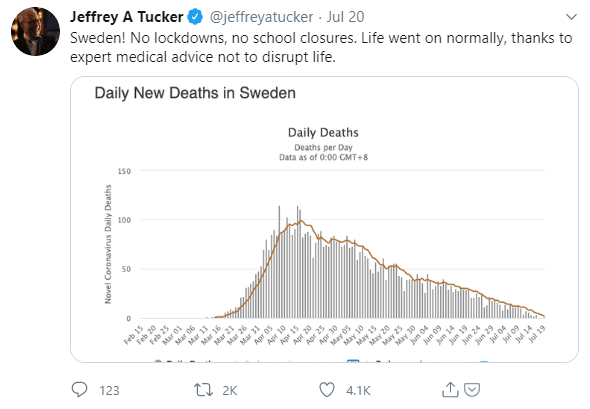 So which version is true?

Did Sweden’s less restrictive approach to COVID-19 usher in the hellscape that US public health officials have warned us about? Or is it actually a model for the rest of us to follow?

It’s too soon to know for sure. But the data we have so far suggests the answer is not black-and-white.

The Problem of Cherry-Picking
In the CBS article, they point to the per capita COVID-19 death toll in Sweden to declare it a policy failure. Writing last month on July 17, CBS notes:

…the death toll from Sweden’s outbreak is now the fifth-worst in the world, per capita. The country’s mortality rate from the coronavirus is now 30% higher than that of the United States when adjusted for population size.

On that date, this was true. It is missing some important context, however.

For starters, if Sweden was fifth-worst in the world, why is the article about Sweden? If the point is to identify some COVID-19 policies that clearly failed, there would seem to be at least four candidates just as worthy of criticism.

Excluding the tiny nation-states of Andorra and San Marino, the four European countries that had experienced higher per capita death tolls than Sweden at the time of CBS’s piece were Belgium, UK, Spain, and Italy. In the last two weeks, Peru has also overtaken Sweden in terms of per capita death tolls.

All of these countries imposed lockdown policies, and still experienced death tolls higher than Sweden. Italy might have an excuse as the first major hotspot in Europe, but what accounts for the others?

This selective criticism of Sweden by mainstream media has been called out elsewhere with good reason. This is classic cherry-picking–finding facts to fit a predetermined narrative.

To be fair, Sweden’s proponents can also be guilty of omitting context.

In the tweet noted above, Tucker points to very low rates of new deaths as a sign of success. This is good news, but it doesn’t tell us much. It’s widely understood that viruses will burn themselves out eventually. The lockdown debate is about how best to mitigate the damage in the meantime.

In another example, this tweet from Yinon Weiss, favorably compares the experience of Sweden to New York. The comparison is correct–Sweden has fared far better than New York on a per capita basis. However, this is better evidence of New York’s extreme failure rather than Sweden’s success. If we draw sweeping conclusions from this data point, then it’s just cherry-picking in the other direction. 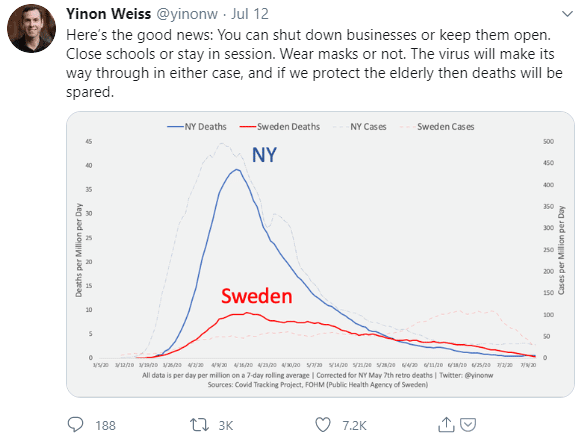 The point is that, so far, Sweden’s results are mixed. They don’t warrant a victory lap for anyone.

Voluntary Versus Coercive
While Sweden seems to be viewed by the rest of the world as a radical experiment when it comes to COVID-19, that’s not how Sweden sees itself.

Speaking to Nature magazine early on in the pandemic, Sweden’s state epidemiologist Anders Tegnell explained bluntly, “I think it has been overstated how unique [Sweden’s] approach is.”

For Tegnell, Sweden’s policy objective is the same as for most other Western countries–flatten the curve to avoid overrunning the healthcare system.

The primary difference is in Sweden’s laws. As he explained in the interview (emphasis added):

The Swedish laws on communicable diseases are mostly based on voluntary measures — on individual responsibility…This is the core we started from, because there is not much legal possibility to close down cities in Sweden using the present laws.

By itself, this almost implies that Sweden would have been just as coercive as other countries if they had the authority. (And as an American, it sounds extremely odd to hear a national government official acknowledge any legal constraints on their power. But I digress.)

However, in a separate April interview with Haaretz, Tegnell argued that the voluntary approach has strategic advantages over coercion. In particular, Tegnell noted that the voluntary measures could be kept in place for an extended period of time. In his words, “We believe that what we are doing is more sustainable and effective in the long term.”
The Importance of Sustainability
Like most other countries, Sweden’s experts share the view that the virus will only stop being a threat once herd immunity is reached or an effective vaccine is developed. “Every other solution is temporary,” Tegnell told Haaretz.
Since both of those solutions are likely months away, the sustainability of the policy response is critical. This is why Sweden’s approach might ultimately prove more successful than its peers.
Although Tegnell doesn’t say this outright, the subtext of Sweden’s approach seems to be that all countries’ COVID-19 policies will look like Sweden’s eventually.
The lockdowns cannot eradicate the virus on their own and cannot be kept in place indefinitely. That means that when the lockdowns are inevitably relaxed, the virus is still around and able to spread.
When the virus starts to spread anew, the authorities in most democratic countries won’t have the political ability to reimpose lockdowns. So their only real option is to impose lighter, mostly voluntary measures like Sweden has done from the start.
Unfortunately, this is how things have played out in many places..
Consider the United States. Many states closed down before they had significant spread and reopened while new infections remained at low, but nonzero, levels. Now cases have surged in several states, and the lockdown measures being reimposed are far less strict than those enforced early on. Noncompliance is also on the rise.
Today, most states’ lockdown policies are still more restrictive than Sweden’s. But this does show the unsustainable nature of the prior approach. Given that the states have landed on less restrictive policies anyway, the utility of the initial authoritarian policies is unclear. The collateral damage of those policies, on the other hand, is visible everywhere.
Premature Conclusions
While Sweden states that its policy goal is to flatten the curve like most other countries, it’s clear that they have taken a less aggressive approach.
It follows that Sweden’s virus curve should be steeper than the curve seen in lockdown jurisdictions. We can see this visually in the chart below (adapted from PBS):