It’s the Bureaucracy, Genius: How Bureaucracy Has Lowered Productivity and Income

It’s the Bureaucracy, Genius: How Bureaucracy Has Lowered Productivity and Income 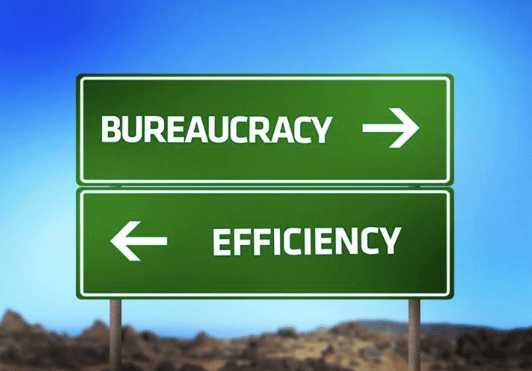 The supposed brightest minds, educated in the supposed best universities, can’t figure out why American productivity has languished in this era of technological innovation, resulting in income growth being lower than it would otherwise be.

Well, my mediocre mind came up with the reason 29 years ago and wrote about it in my book and in scores of subsequent journal and newspaper articles.  This was certainly not a great intellectual feat, because the root problem was, and continues to be, obvious to anyone who is not isolated in an ivory tower, as the problem pervades corporations, nonprofits, universities, school districts, cities, states, and the federal government.

The problem is bureaucracy.

At the federal level, this destroyer of productivity and wealth can be seen in the 40,000 pages of the tax code, the thousands of pages of new federal rules every year in the Federal Register, and the proliferation of jobs in the private and public sectors to decipher the rules, comply with the rules, consult on the rules, and lobby on the rules.  Holders of these jobs then become a constituency that will fight to protect their jobs, including those on the right who rail against big government.

Then there are the jobs that propagate because the natural course of bureaucracy is to beget more bureaucracy.

Two recent letters to the editor of the Wall Street Journal gave examples of this.  One letter said that “the size of the [White House’s] National Security Council staff went from a few dozen under Henry Kissinger and Zbigniew Brzezinski to nearly 600 under President Obama.”

Do you feel more secure?

The other letter said that since the Defense Intelligence Agency (DIA) was established in 1961, it has ballooned to 17,000 employees.  The agency was established because the Army, Navy and Air Force had been issuing conflicting military assessments instead of working as a team in developing a joint assessment.

Is it any wonder that the top-heavy military became mired in Afghanistan and made the strategic blunder of the Iraq War?

The proper fix would be to kick the executives at the top of the silos in the ass, demand that they and their respective organizations work as a team, incentivize them to do so, and fire them if they don’t change their ways.  The proper fix is not to bury the underlying problem under another layer of management.

The Department of Homeland Security is another example of burying the underlying problem under another layer of management.  The department was established after 9/11 because different federal agencies had missed the terrorist threat, because they hadn’t shared critical information.  Was anyone fired over this?

Unnecessary jobs have also propagated in universities, where the number of administrators has doubled over the last 25 years, surpassing the growth in faculty and increasing the cost of a college degree—which in turn has increased tuition debt, which in turn has led to presidential candidates on the left calling for the erasing of the debt and making college free.  Tellingly, they don’t call for a reduction in administrative jobs, because many of the jobs exist to deal with regulations that they have sired.

Bureaucracy is not just a problem with universities and governments; it also pervades the private sector.  Sears is in its death throes today because it built the Sears Tower in the 1970s to house its burgeoning corporate staff and their fiefdoms and miles of red tape.   At the same time, Sam Walton was expanding his business in Rogers, Arkansas, where he was close to the customer.

Is it a coincidence or a case of cause and effect that Boeing’s disaster of the 737 MAX happened after it had relocated its headquarters to Chicago, far away from where its planes are designed and assembled in Seattle?

Is it a coincidence or a case of cause and effect that the Democrat and Republican parties became out of touch with Middle America, due to spending too much time in the wealthy imperial city of Washington, DC?

What does it portend for Google and Apple that they have built Versailles-like headquarters in locales that rival the Imperial City in being removed culturally and economically from mainstream America?  And what does it portend for the tech industry in general that its workforce is congregated in hip urban centers, where everyone has similar values, politics, interests, and glaring blind-spots about their imagined social awareness and moral superiority?

These questions raise the question of where a corporate headquarters should be located:  near where the main work of the business gets done, or near customers, or near suppliers, or near a talent pool, or what?  Actually, the location is less important than what the company does to ensure that the top of the organization doesn’t become out of touch with the employees on the firing line who make products or deal directly with customers; and, similarly, that dysfunctional behavior at the top—backstabbing, Machiavellian maneuvering, and poor coordination and communications—aren’t amplified throughout the lower levels of the organization.

To make matters worse, companies have bought organizational snake oil from tech companies and consultants, in the form of communications systems and message boards that supposedly connect all levels and departments, making it easier for employees to be in the know, to coordinate their work, and to give feedback to management.  But these systems can’t overcome dysfunctional politics, distrust, conflicting priorities, and lousy leadership.  Believing that they do is akin to believing that serious marital problems can be solved by spouses texting each other more.

Judging by the ever-increasing number of highly-paid and powerful staffers at corporate headquarters whose jobs and careers are dependent on pleasing the Leviathan in Washington, companies should move their headquarters to the Imperial City, as Amazon did with its second headquarters.  That way, the scores of tax attorneys, SEC lawyers, accountants, OSHA specialists, human resources managers, benefits managers, government affairs executives and others who specialize in brain-deadening government regulations—and who are often hardcore conservatives who rail against big government—could be close to the regulatory rice bowl that is the source of their income, influence and prestige.

In a 1995 commentary in the Wall Street Journal, I detailed the phony professionalization of the human resources function and its growth in power and pay, a growth that was in lockstep with the growth of workplace regulations, the increasingly counterproductive machinations of the Equal Employment Opportunity Commission and the Office of Federal Contract Compliance, and the burgeoning rules governing 401(k) plans and employer-provided health insurance.  Naturally, the president of the Society of Human Resources Management took umbrage to what I wrote.

Advertisements and commercials by firms selling HR software make it appear that the software will improve the workplace, when in actuality the software facilitates regulatory recordkeeping and further entrenches the HR bureaucracy.

Bureaucracy also pervades small businesses.  A noticeable example is the useless HIPAA privacy form that you sign in your doctor’s office, where a clerk is paid to give you the form, check if you signed and dated it, and then file it.   But what you don’t see are the high-priced consultants and software vendors behind the scenes who have become indispensable to physicians in complying with a plethora of regulations and reporting requirements, most of which has nothing to do with your health but can ensnare the physician in legal difficulties if not followed to the letter of the law.

A consequence has been that physicians are foregoing private practice to join large hospital groups, which have the economies of scale and staffing to handle the regulatory workload.   This means that the most personal of business relationships—your one-on-one relationship with a doctor—is being replaced by a relationship with a faceless corporation.

The private sector tends to be the realm of Republican bureaucrats who feed off the regulatory state, while the huge social-welfare and education complex tends to be the realm of Democrats, whose livelihoods depend on providing social services, housing, medical care, financial aid, and schooling to the underprivileged, at a cost of trillions of dollars over the decades.  Neither side has an interest in making themselves unnecessary or shrinking their rice bowls.

Imagine, for example, how much smaller the social-welfare complex would be if root socioeconomic problems had been addressed decades ago—or more specifically, if Daniel Patrick Moynihan’s warning had been heeded 55 years ago about the welfare state making black men unnecessary and thus destroying two-parent black families, which in turn has led to an increase in crime, in learning and behavioral problems in school, and in a political clamor for social justice without an understanding of how social justice was thwarted by the very same progressives now clamoring for social justice.

Not learning from what the welfare state has inflicted on blacks, the same institutional injustices have been inflicted on poor whites, with similar results:  broken marriages, one-parent families, drug abuse, obesity, low test scores, and dependency on welfare and disability payments.

As I calculated years ago, over 60% of voters live in a household where at least one member either works for the government or in a job dependent on the regulatory state, or receives welfare, an entitlement, or disability payments.  And in many locales in the country, the biggest employers are the defense industry or the medical industry, which is dependent on Medicare and Medicaid for half of its revenue.

In conclusion, you might want to know what needs to be done about bureaucracy.  Well, nothing needs to be done, because the problem is self-correcting.  Companies eventually collapse from the deadweight and are replaced by more nimble and efficient competitors.  The same with nations, but it just takes a lot longer.