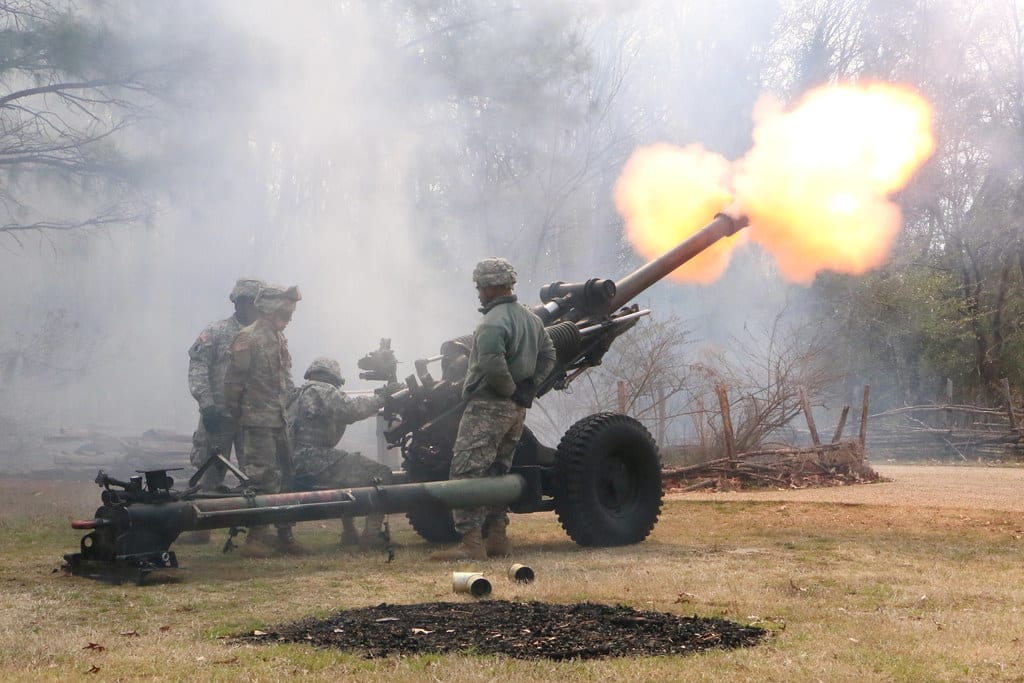 Virginia National Guard Soldiers assigned to the Hampton-based Bravo Battery, 1st Battalion, 111th Field Artillery Regiment, 116th Infantry Brigade Combat Team represent the modern military at Military Through the Ages at Jamestown Settlement March 18, 2017, in Williamsburg, Virginia. Maj. Gen. Timothy P. Williams, the Adjutant General of Virginia, presented his challenge coin to the Soldiers in recognition of their outstanding support for the event. The Virginia Guard traces the traditions of Citizen-Solider service to the settlements founding in May 1607 and considers Jamestown to be its birthplace. Since 1607 when Capt. John Smith organized a militia to defend the colony, there has not been a day without a military presence in Virginia to defend freedom at home and overseas. Read more at https://go.usa.gov/xXBQr. (U. S. National Guard photo by Cotton Puryear)

Exactly one week ago at about 11:30am, as I sat at my desk working, two enormous explosions shook my house. My windows rattled, my coffee slightly sloshed in its mug, and my dogs started barking in alarm. I remarked to my wife across the hall: “Those were some big ones.” She wordlessly agreed.

Indeed, I live several miles outside of the artillery firing ranges at Fort Bragg, yet the shockwaves barely elicited an acknowledgment from either me or my wife. Four to five times a year, military units train on these artillery ranges; firing all sorts of munitions ranging from small, handheld 60mm mortars to 155mm howitzers, capable of rending men and earth with frightening power.

Most notably, the Marines come to train twice a year. Stationed God knows where, each Marine unit must qualify their equipment and crews on this range once a year in a relatively short two week period. During these two weeks, the sounds of artillery falling in the distance are nearly constant, sometimes ten or more a minute, with the echoes of the last barely fading before the next falls. Then, abruptly at 11:00pm, following an astonishing crescendo lasting about a minute, the firing ceases.

Obviously, I feel no fear when I hear the shells falling. They are not being fired at me, nor will they ever. In fact, it is somewhat of a tradition on some of the local social media pages to announce when the Marines are coming to train, and to gently tease new residents who are unsurprisingly alarmed at the sudden onset of firepower.

Sometimes I sit and I listen to the guns, and imagine that I am afraid of them; that the guns are coming for me and my home and my family, and that I must mentally prepare myself to fight for my life and the lives of my family. I try to imagine what it would be like, what the fear and the pain and uncertainty of living in a warzone must do to your soul. And yet, there are people incapable of such empathy. 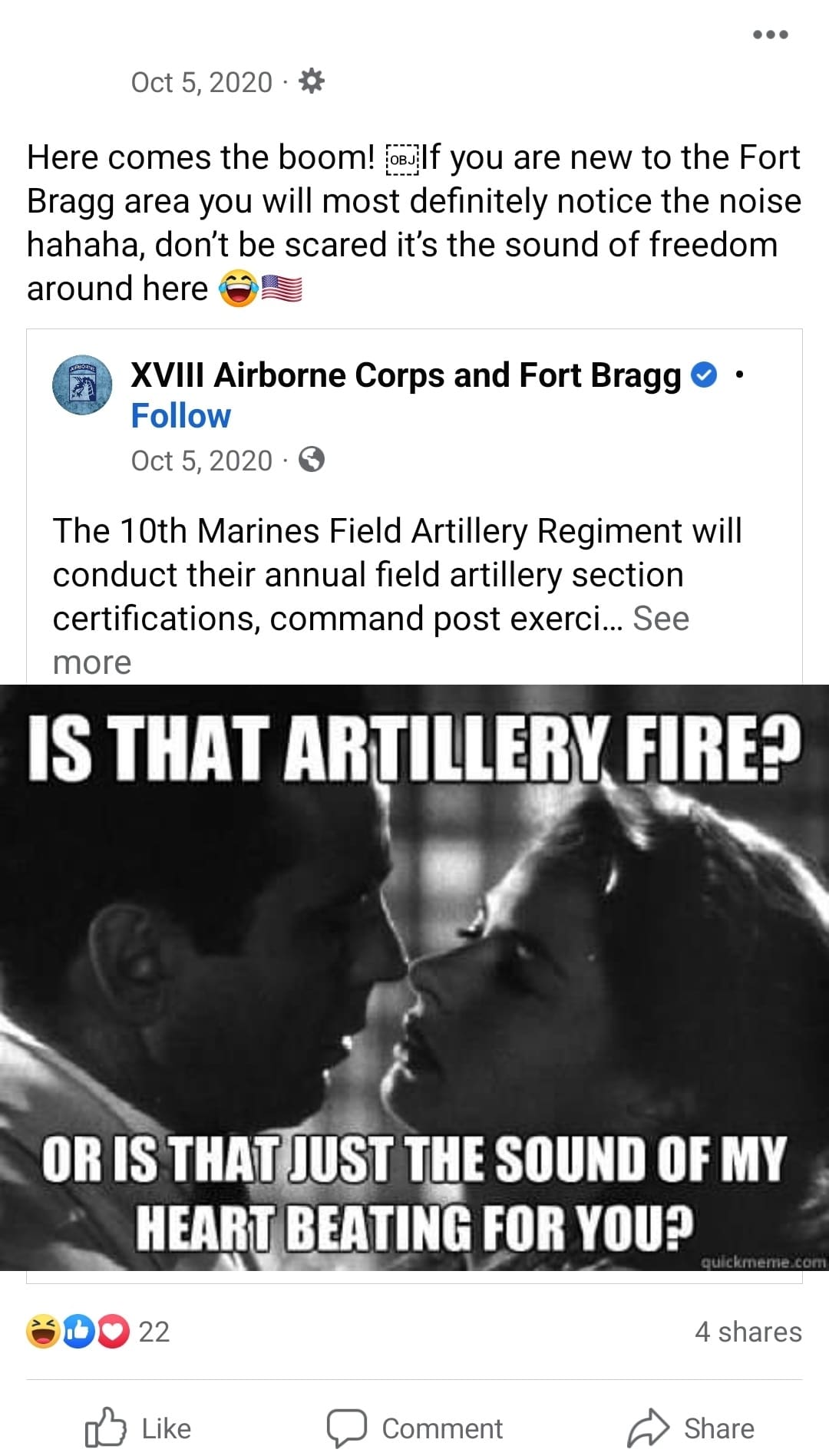 While I suspect that these comments are delivered with a heavy dose of irony, I have met plenty of people who have no problem attesting that their or their loved ones’ employment by the military (I am trying with difficulty to break myself of the habit of using the term military “service”) is in the service of freedom. I have trouble even imagining the circumstances under which one could seriously interpret the sounds of heavy artillery with freedom. Even more galling, I am fairly certain this “meme,” if one could call it that, created by the military is from Casablanca, one of the most important movies of all time about the ravages of war. In reality, heavy artillery, along with armored warfare, is the key indicator of a state with the capability to wage total war; i.e. a state capable of enslaving its people to feed its war machine. No civilian in Fayetteville, North Carolina will be forced to live under the pall of cannons in the distance. Not even the wildest fancy of the most impudent war hawk would seriously claim that the United States would be invaded by a foreign country.

For what, then, do they train? Is the most you can say about it really that they will travel 5,000 miles to Eastern Europe to fight Russians on (or even within) their own borders? As flimsy of a reed as it was, today we cannot even say that their guns will be used against peasants in Afghanistan or Iraq. Why do we accustom ourselves to the constant din of Artillery, King of Battle?

Americans for far too long have been unwilling to entertain even the idea of humility; that the middle part of North America should not have anything to say about, let alone any responsibility for, what happens on the Eurasian Steppe. It is the farthest thing from consequential to any American that Ukraine, with a GDP smaller than Kansas, should fall or not to its perennial ethnic rival.

Is it really peace when your Army, the largest, most capable, and most well-funded in the world, constantly trains as though our nation is under attack? Is it really peace when my community, my children in their school, and even my dogs are subjected to experiencing, even at a distance, the terrifying power of mankind’s most powerful war machine? I don’t think so. I would just like to drink my coffee.

John Vaughn is a recently retired officer in the United States Army. He graduated from West Point in 2013 and commissioned as an Infantry officer before becoming an Information Technology Systems Engineer for the U.S. Army. He has served as a Platoon Leader at Fort Bliss, TX, as a Company Commander at Fort Benning, GA, and as an instructor at the Army’s Officer Candidate School. He has deployed to Kuwait and Afghanistan, and has been published in the Army’s Signal Magazine.