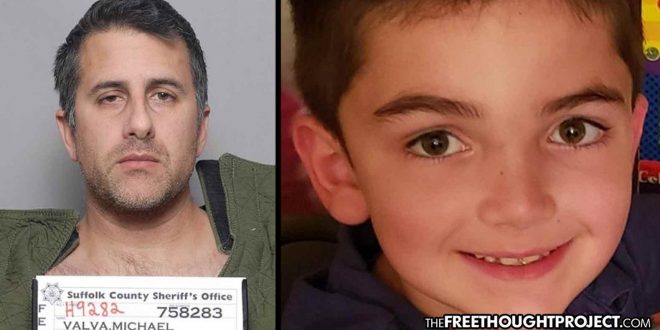 New York, NY — The death of 8-year-old Thomas Valva shocked the nation earlier this year when it was discovered his New York cop father was alleged to have beat him and starved him before throwing him into an unheated garage where he froze to death. As the investigation unfolded, we learned that authorities were warned by multiple people on multiple occasions that NYPD officer Michael Valva was horrifically abusing his children, and, in a disgusting display of blue privilege, no one acted. In fact, the only actions taken were against the mother, and helped Valva continue the abuse.

Now, this officer’s blue privilege is being exposed once again as he was quietly allowed to resign this week—to protect his pension.

“He voluntarily resigned today,” Valva’s attorney John LoTurco said. “He executed paperwork in that regard today,which protects his benefits and his pension. There’s no admission of any wrongdoing. It allows him to forgo any disciplinary hearing and in exchange, he will no longer receive any salary or any future benefits.”

As we reported at the time, 8-year-old Thomas died of hypothermia on January 17 after he was allegedly starved, beaten and locked outside overnight by his NYPD officer father. Valva allegedly washed the body of his autistic child in an attempt to warm the corpse, then lied to cops by claiming the boy fell in the driveway. On Jan. 24, Valva and his fiancee Angela Pollina were arrested and charged with murder.

After their arrests, we found out that Justyna Zukbo-Valva, Thomas’ mother, had filed multiple complaints—with physical evidence—alleging the abuse. Instead of helping her authorities simply looked the other way. Not only was she never given help, Zukbo-Valva was treated like she was the abuser and lost custody as the true monster continued his horrifying treatment of his children.

According to the NY Daily News, who received the documents from Zukbo-Valva, after losing custody, this mother feared for the safety of her children, fought to save them, and was ignored and punished until Thomas was tortured to death.

In meeting after meeting with Child Protective Services, beginning in 2017, Zubko-Valva implored caseworkers to get involved and protect her boys now living with their father in Center Moriches, L.I. The mother, recalling a Dec. 6, 2017, meeting, says caseworker Michelle Clark blamed her rather than NYPD officer Valva for the regressing autism of Thomas’ older brother Anthony.

Clark also declined to read progress reports from the special school where the mother enrolled the brothers before Valva pulled both of them out.

“She informed me she will not take any evidence from me,” wrote Zubko-Valva about the caseworker. “If I try to provide my evidence to her, she is not going to take them into consideration.”

Despite clear signs of physical abuse, including testimony from the victims and physical injury—black eyes, and bald patches from his hair being pulled out at the roots—according to the News, Clark, in five reports filed between Oct. 31, 2017, and Jan. 15, 2018, found no safety factors that “place the children in immediate danger” and quickly closed the investigations into the father’s treatment of Thomas and 10-year-old Anthony.

This cop’s blue privilege stretched far and wide and ultimately ended in a child’s death. According to the News:

According to the mother’s records, her estranged husband Valva erupted in anger on Jan. 13, 2018, when Thomas accused Pollina of hitting him. Valva forced the boy to lean over a table with his hands outstretched, then hit the child repeatedly on his buttocks and lower back on the right side — leaving bruises confirmed by a neighbor.

Zubko-Valva filed another complaint. But her estranged husband simply refused to open the door when CPS sent a caseworker his home for an interview him, records show. Three days later, the bruised little boy told child welfare worker Michele Clark that he was still in pain from his father’s beating.

Despite being told by the child that he was being beaten by his father, Clark’s reaction was to lift a protection order against Valva and order one against the mother. As the News points out, this decision is now coming back to haunt them.

“Michele Clark abused her power to falsely accuse me in order to protect Michael Valva,” writes the distraught mom.

On the night Zubko-Valva was told she was losing custody of her children, she reportedly told Kimberley Berens, who ran the Fit Learning school, which educated autistic children before they went to regular schools that Valva was “going to kill my kids.”

Unfortunately, she was right.

Despite authorities eventually finding out that Valva was savagely abusing his autistic son, the court chose not to send them to their mother and put them right back with their father and then moved to sweep it under the rug while continuing their assault on this poor mother.

On the contrary, after Valva got away with child abuse, the boys’ mother was forced to justify why she chose to put Thomas’ older brother Anthony in a special school for autistic kids. Unlike Valva, Zubko-Valva was forced to go through a full trial with witnesses and arguments just to prove she’d done nothing wrong by sending her kids to a special school.

To sum it up, the entire system acted on behalf of the officer — likely due to the fact that he had a badge — while proactively going after the mother who was only trying to expose her ex-husband’s abuse of their children.

On Oct. 1, 2018, Zubko-Valva filed a request to get a new case worker, citing the clear special treatment given to her cop ex-husband. Instead of doing this, the very next day, CPS caseworker Edward Heepe closed three investigations into the father’s treatment of his children. He omitted the January beating incident from his report. In November 2018, court-appointed lawyer Donna McCabe was singing the praises of Valva and Pollina—even as teachers at the boys’ school were repeatedly calling the state child abuse hotline, according to the News..

Even more disturbing is that Zubko-Valva is now claiming that video evidence from surveillance cameras inside the home and the garage where Thomas died — which can prove without a doubt that Valva murdered his child—have all been deleted.

“I was told two weeks ago by the District Attorney’s office that they cannot get the images from the day that Tommy died, because, allegedly, they were deleted,” Zubko-Valva said. “But as you know we live in the technological age of everything being stored somewhere and can be, you know, brought back.”

The system actively set out to smear a caring mother while protecting a vicious child abuser which resulted in the tragedy in January. Sadly, as TFTP has reported before, this is but a broken record of a system and occupation that experiences domestic violence at a far greater rate than the rest of society and goes out of their way to sweep it under the rug.

If you think a system that protects an abusive cop and allows him to resign to protect his pension, has your interests in mind, you need to think again.