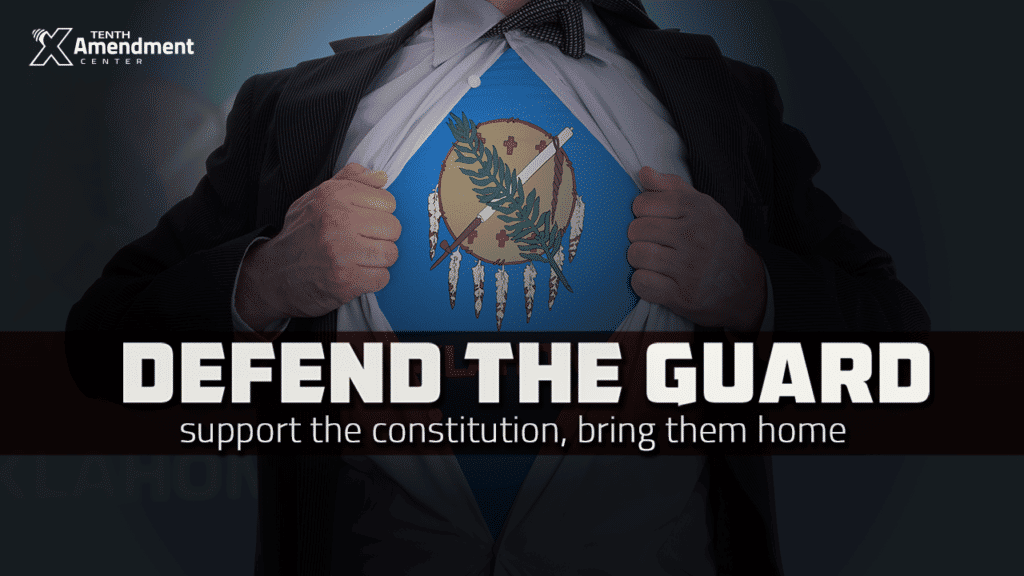 OKLAHOMA CITY, Okla. (Dec. 10, 2019) – A bill prefiled in the Oklahoma Senate would prohibit unconstitutional foreign deployments of the state’s National Guard troops. Passage into law would effectively restore the founders’ framework for a state-federal balance regarding the state militia.

Sen. Nathan Dahm (R-Broken Arrow) prefiled Senate Bill 1101 (SB1101) last week. The legislation would require a congressional declaration of war before Oklahoma National Guard units could be deployed into combat in a foreign country. The legislation reads in part:

Guard troops have played significant roles in all modern overseas conflicts, with over 650,000 deployed since 2001. Military.com reports that “Guard and Reserve units made up about 45 percent of the total force sent to Iraq and Afghanistan, and received about 18.4 percent of the casualties.” More specifically, Oklahoma National Guard troops have participated in missions in Iraq, Afghanistan, Syria, Kosovo, Ukraine and elsewhere.

Since none of these missions have been accompanied by a Constitutional declaration of war, the Defend the Guard Act would have prohibited those deployments. Such declarations have only happened five times in U.S. history, with the last being in World War II.

RETURNING TO THE CONSTITUTION

West Virginia Rep. Pat McGeehan served as an Air Force intelligence officer in Afghanistan and has sponsored similar legislation in his state.

“For decades, the power of war has long been abused by this supreme executive, and unfortunately our men and women in uniform have been sent off into harm’s way over and over,” he said. “If the U.S. Congress is unwilling to reclaim its constitutional obligation, then the states themselves must act to correct the erosion of constitutional law.”

Tenth Amendment Center National Communications Director, Mike Maharrey agreed. “While getting this bill passed isn’t going to be easy, it certainly is, as Daniel Webster once noted, one of the reasons state governments even exist.”

Maharrey referenced an 1814 speech on the floor of Congress where Webster urged similar actions to the Oklahoma Defend the Guard Act. He said, “The operation of measures thus unconstitutional and illegal ought to be prevented by a resort to other measures which are both constitutional and legal. It will be the solemn duty of the State governments to protect their own authority over their own militia, and to interpose between their citizens and arbitrary power. These are among the objects for which the State governments exist.”

SB1101 will be officially introduced when the Oklahoma General Assembly convenes on Feb. 3, 2020. At that time, it will be referred to a Senate committee where it must pass by a majority vote before moving forward in the legislative process.