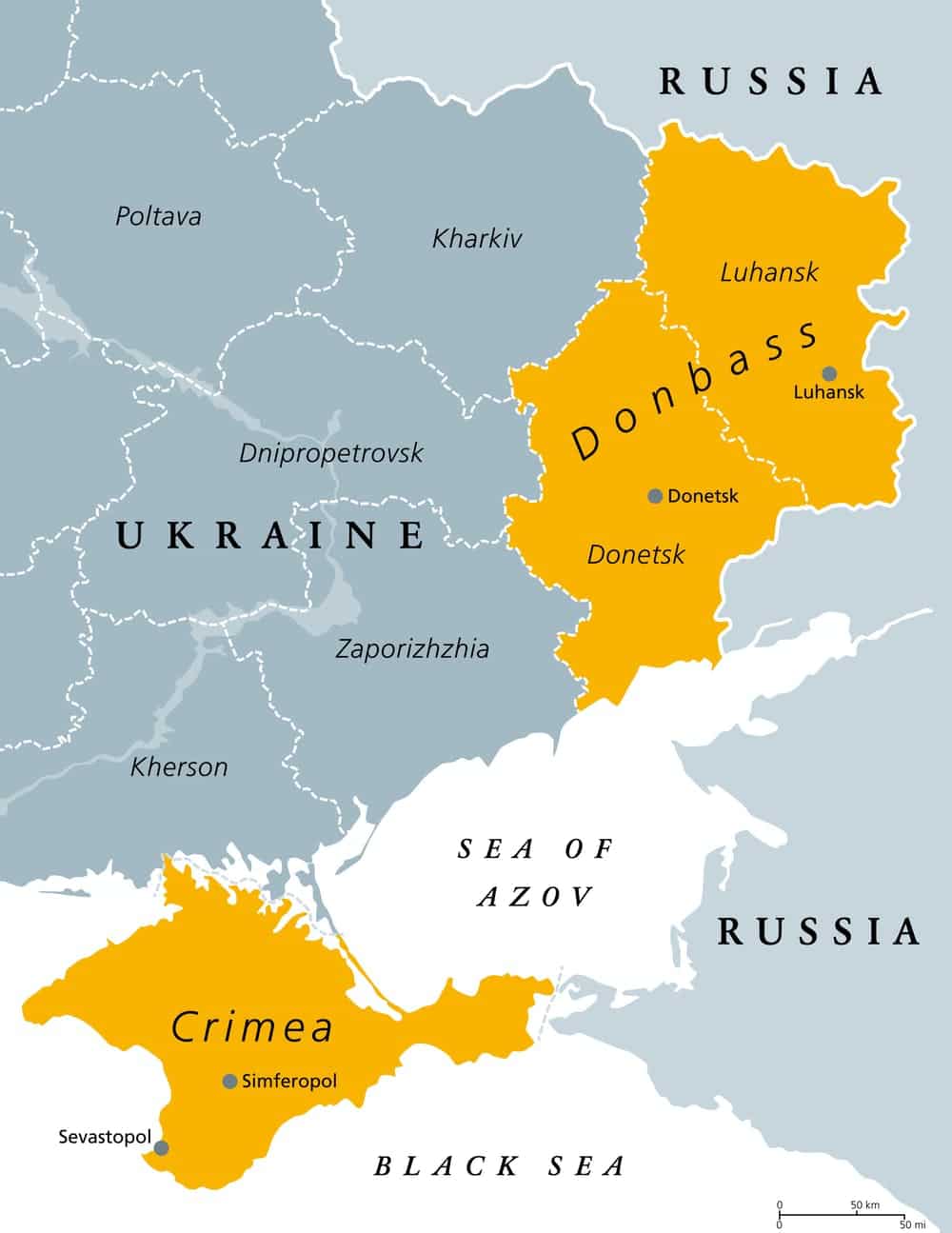 Russian President Vladimir Putin has agreed to recognize two break-off republics in eastern Ukraine as independent states, stoking cries of horror and condemnation from the Western keepers of the ‘rules-based international order.’

The Russian legislature passed a bill last week calling on Putin to recognize the ‘People’s Republics’ of Donetsk and Luhansk, which each declared secession from Ukraine following a U.S.-sponsored coup there in 2014. While the Kremlin initially dismissed the idea, saying the move would run afoul of ceasefire agreements struck in Minsk, the president reversed course on Monday following appeals from leaders of the break-away states. He later deployed soldiers for a peacekeeping mission in the war-torn region, where fighting between Kiev and separatist forces has sharply escalated in recent days.

Moscow’s decision to recognize the republics—which have now operated outside Kiev’s control for some seven years—was met with predictable outrage from Western officials. The U.S. State Department dubbed the move a “clear attack on Ukraine’s sovereignty,” comments echoed by the United Nations, the European Union and the NATO military alliance. The EU’s foreign policy chief Josep Borell, meanwhile, has accused Russia of a “determined effort to redefine the multilateral order” established in the wake of the Second World War.

Proponents of that post-war system have long maintained that it has kept the peace over the last 80 years. A key tenet of the global order states that borders drawn after WWII must remain set in stone, and Russia’s seizure of the Crimean peninsula from Ukraine in 2014 and its earlier recognition of South Ossetia have been cited as major destabilizing actions. Its move in the Donbas will almost certainly be added to the list.

However, coming from a group of nations that have spent the better part of the last century shaping the world as they saw fit—ranging from national partitions and redrawn borders to invasions and regime-change operations—the vocal condemnations of Russia ring slightly hypocritical.

Israel stands as a prime example of the double-standards at work. Since its creation by a United Nations partition scheme in what was formally Palestine, the U.S. has given Israel over $100 billion in aid—all as the regime in Tel Aviv grabs Arab land and terrorizes the civilians who live on it. Israel’s decades-long project of occupation and dispossession has created millions of refugees, as well as a system of “apartheid,” according to world bodies like Human Rights Watch and Amnesty International. 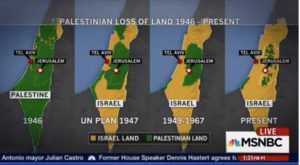 Additionally, under President Donald Trump, Washington recognized Israel’s claim to the Golan Heights—territory seized from Syria decades ago during the 1967 Six Day War and later formally annexed. Despite presenting himself as a fair critic of Tel Aviv, Joe Biden has since affirmed his predecessor’s decision regarding the Golan.

Biden has also continued U.S. support for Morocco’s land-grab in the disputed Western Sahara. To coax the country to sign a normalization deal with Israel (and help his 2020 reelection bid), Trump agreed to recognize Morocco’s claim to the area, though its inhabitants consider it an independent territory. Despite Morocco’s brutal occupation of the region—including “widespread arrests, the torture of dissidents, and violent suppression of peaceful protests,” according to journalist Stephen Zunes—the Biden administration refuses to reverse course.

During Barack Obama’s presidency, moreover, Washington backed the partitioning of Sudan and helped bring a new state into existence, installing a cowboy hat-wearing war criminal to run the newly created South Sudan. The U.S. government’s own estimates suggest some 400,000 people have been killed throughout Sudan’s civil war, which continues to this day alongside brutal acts of ethnic cleansing.

While nowhere near an exhaustive list, the cases above suggest the West’s commitment to its own ‘liberal world order’ is paper-thin, with its transgressions often far more extensive and bloody than any of Russia’s actions in Ukraine or South Ossetia.

The Ukrainian example offers a unique comparison of the American and Russian approaches to foreign policy. The U.S.-sponsored coup in Kiev empowered neo-Nazi militias and ultra-nationalist factions to oust a leader more friendly to Russia, with the newly installed government immediately launching a ‘War on Terror’ against Russian-speaking separatists in the Donbas. The civil war has dragged on for years, claiming up to 15,000 lives.

At the same time, Russia’s seizure of the Crimea—historically a Russian territory—was done largely without bloodshed, and residents later voted in a referendum to support the move. As the United States hands Kiev hundreds of millions in “lethal aid” to wage its war, helping to decimate infrastructure in the Donbas, Moscow has poured billions of investment dollars into Crimea.

While annexations and other territorial meddling often lead to violence, America’s regime-change wars have proven to be the most significant breaches of world peace over the past three decades. Ahead of the disastrous 2003 invasion of Iraq, then-Senator Joe Biden played a key role in helping President George W. Bush topple Saddam Hussein. The ensuing violence has killed over one million Iraqis, according to some estimates, while the blowback from the war played a significant role in stoking conflict in Libya and Syria, where hundreds of thousands more have died of violence and deprivation.

Though countless pundits in the U.S. foreign policy establishment have placed sole blame on Russia for the ongoing war in Syria, it was Washington, not Moscow, that armed, trained and equipped many of the jihadist groups driving the violence there. Under Obama’s CIA, ‘Operation Timber Sycamore’ handed hundreds of millions in weapons and gear to Salafist groups seeking to overthrow Bashar al-Assad, with some even making its way to the likes of the Islamic State.

For American leaders, however, it is Russia that is “disrupting the world order” and “destroying democracies”—in the words of Senator Lindsay Graham following Putin’s decision to recognize the Ukrainian break-off states.

When it comes to thugs like Putin disrupting world order and destroying democracies – enough is enough.

The ‘world order’ challenged by Putin is not intended to preserve international peace, but rather retain the United States as the world’s sole superpower, able to extend its reach from the former USSR to the South China Sea and beyond. With its move in the Donbas, Russia has made it known that the West does not determine the destiny of the entire developed world, insisting on a multi-polar model in which Washington must cooperate with, and not merely dictate to, other powers.

Biden now faces a tough reality. America is overextended and has squandered any credibility it may have once had with an endless series of catastrophic interventions with nothing to show for it. The current administration’s laundry list of foreign policy objectives includes confronting China and Russia, denuclearizing North Korea, containing Iran, overthrowing Venezuela’s Maduro and Syria’s Assad, as well as driving the development of Africa in a direction friendly to the West.

Given Putin’s action in the Donbas, the standard foreign policy playbook calls to bring heavy sanctions on Russia and make the country an international pariah. However, that gambit has already been tried and failed. In 2014, the response to the seizure of Crimea was to drown Russia in sanctions—said to be the most extensive penalties against the country since the fall of the USSR—yet, eight years later, Crimea remains firmly held Russian territory.

In a speech Tuesday, the 79-year-old president announced new sanctions and troop deployments. While Biden did not shut the door on diplomacy, his unwillingness to take a new approach ensures further tensions with Russia over Ukraine.

In recent weeks, Biden has acknowledged that U.S. forces will not fight to defend Ukrainian soil, and sanctions on Europe’s top energy exporter and a major trade partner could wreak havoc on Western economies. Instead, approaching Putin to reestablish the three bilateral arms control pacts abandoned by previous U.S. administrations would be a good place to start in reviving the U.S.-Russia relationship. Further common ground, and indeed a full retrenchment of American policy, may then follow.

Though he will face charges of ‘weakness’ typically hurled at Democratic presidents, Biden should also make clear that NATO has become the kind of entangling alliance our founders warned about. Several member states contribute nothing to America’s security and would be impossible to defend from Russian attack regardless. President Biden can allow Europe to oversee its own defenses as he exits the Cold War-era alliance, and forge a new path with the world’s second-largest nuclear power.