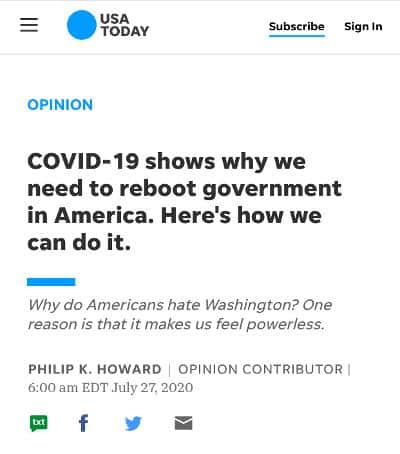 Imagine my intrigue at seeing this subtitle kicking off a recent op-ed in USA Today:

Why do Americans hate Washington? One reason is that it makes us feel powerless.

It didn’t take long, however, for me to be disappointed.

The article started out promising, by citing “discontent” toward government coming from “both sides.”

“A survey in 2018, for example, found that almost two-thirds of Americans favored ‘very major reform’ of government, almost double from 20 years ago,” the article noted.

The article next itemized some obstacles to reforming some of society’s pressing problems. Police unions stand in the way of firing bad cops. Red tape gummed up the response to the spread of coronavirus.

Disappointingly, however, the article quickly squandered an opportunity to educate readers how a significant reduction in state power and influence would be the best recipe to heal much of society’s division. Instead, it hits readers with this line:

“Americans need to feel that government can make things better.”

This turn for the worse should have come as no surprise, given the author of the piece, Philip K. Howard, is the head of an organization called “Campaign for the Common Good.”

Any group or person claiming to be working toward the “common good” immediately should raise a red flag for libertarians. Of course, we know there is no such thing as the “common good,” but rather an extremely diverse set of individuals with varying wants and differing plans on how to achieve happiness.

So, how do we achieve this common good and overcome citizen’s sense of powerlessness, according to Mr. Howard?

“Let people take responsibility again. Give officials and citizens alike goals and guiding principles, and then let other people hold them accountable,” he recommends.

Who should “give” officials and citizens their goals and guiding principles goes unanswered.

Such suggestions may be great for government officials, but doesn’t do much for citizens. Indeed, his suggestions further entrench the state as problem-solver for society, removing opportunities for free citizens to responsibly solve problems through voluntary cooperation.

To his credit, Howard criticizes the government’s overly-complex law books that allow for little discretion on the part of public officials or citizens, and calls for a process of simplifying and stripping them down.

He supports this notion, however, in part because it will “reactivate(s) our link to government.”

The last thing we need is a greater link to the oppressive and divisive leviathan government.

“Governing isn’t this hard,” Howard assures us. “America needs a new public operating system that re-empowers people with responsibility to deal sensibly with the situation before them.”

But a “new public operating system” will still carry with it the immoral baggage of the old one. It will be funded by taxes stolen from citizens. Its decrees will still be enforced by threats of force by an organization with a monopoly on violence.

Howard is focused largely on making government more efficient in carrying out its functions, and uninterested in limiting its size and scope. This won’t reduce the division that he expressed concern over. The state sows division because if forces some to fund others through welfare and wealth redistribution schemes, and it compels people with vastly different preferences to live under the same arbitrary rules having nothing to do with protecting people’s person and property.

Amazingly, Howard concludes with the statement, “The best cure for alienation is ownership.”

But that starts with self-ownership, not reducing red tape to allow government agents to more swiftly enforce their decrees or spend stolen taxpayer money.

Citizens feel powerless because the state is empowered to initiate force against them, with no repercussions. Powerlessness is not felt because government contractors are slowed from starting their tax-funded projects due to red tape.

Mr. Howard largely gets the diagnosis right. More people are getting frustrated with government and recognizing it as a source of division. Disappointingly, he gets the cure wrong.

Instead of a “reboot” of government, society needs a radical rollback of its power.