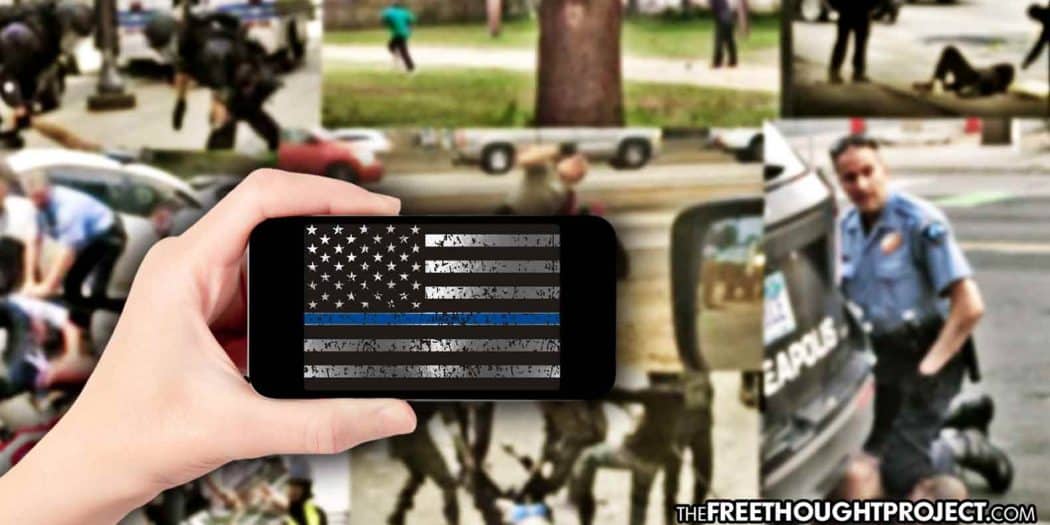 George Floyd, Eric Garner, Alton Sterling, Alexander Gonzales, Walter Scott. and countless others all have one thing in common—their last moments alive were captured on cellphone videos as police killed them. These videos and others like them led to charges against those involved, with some of them putting killer cops in jail for a long time.

Not only did these videos lead to charges against cops but they showed the world the reality of police many interactions and how the escalation of force can and will result in the death of those accused of petty offenses.

Filming the police, as the Free Thought Project has stated over the years, is a major tool in holding violent and killer cops accountable. However, a couple of recent court rulings have free speech experts worried that the person who films the next Eric Garner or George Floyd—may end up in a cage for it.

The Tenth Circuit ruled in March that Denver police officers are immune from a lawsuit alleging they detained a man and searched his tablet after he video recorded them arresting a suspect. Florida’s Fourth District Court of Appeal in May found in a similar suit that Boynton Beach police were justified when they arrested a mother recording her son’s arrest.

Both decisions sidestepped the issue of whether citizens have a constitutional right to record the police in public, according to experts, who say the courts have generally affirmed such a right.

But the rulings, which several of these experts called “outliers,” further confuse an already unclear area of the law, and some attorneys worry they could discourage people from recording police misconduct or encourage officers to try and stop those who do press “record.” And that could hamper recent efforts at police reform, which have largely been propelled by these videos.

One of these cases could even find its way to the U.S. Supreme Court, according to experts.

“We all know that the Black Lives Matter movement and the movement to defund the police would not be anywhere near where they are today without cellphones and other recordings of interactions with the police,” said Emerson Sykes, a staff attorney with the ACLU’s Speech, Privacy and Technology Project.

“Where’s there’s documentation of misconduct,” he added, “that has to be protected.”

Experts refer to the aforementioned cases as “outliers” as they fly in the face of the majority of court rulings which affirm a citizen’s right to record police.

As TFTP has reported, it has been clearly established multiple times that all Americans have the right to record the police. For an officer or officers of the law to remain willingly ignorant of this precedent is at best, dereliction of duty, and at worst, unlawful deprivation of rights. Nevertheless, it happens all the time.

Without citizen video, the country would still be in the dark about the nature of police violence in the land of the free and thanks to these outlier cases, we could possibly revert back to that darkness.

“Without recordings of police, one can’t imagine that we would have as much progress in the movement for racial equality as we have now,” Sykes said, according to Law 360.

But that progress could be jeopardized by decisions like the ones in the Tenth Circuit and Florida. It’s already “very difficult” to hold police accountable for misconduct, especially when it comes to the “blurry line” between recording police and interfering with them, Sykes said.

And those two courts may have just made that line blurrier, experts say.

“Any time that we’re not establishing clear rules for the police and the public, it’s going to deter the public from exercising their constitutional rights because they don’t know what is and is not protected,” Scott Skinner-Thompson, a University of Colorado Law School professor told Law 360.

These recent court rulings, though outliers, highlight the tendency of the state to shield itself from transparency. On top of these two court cases, the state of Oklahoma is pushing a bill that could have a similar effect—film the cops, go to jail.

If House Bill 2273 is passed into a law in Oklahoma, those who post photos or videos of police online could end up in jail.

According to the legislation, someone could be arrested if they post to an online site “the information of a law enforcement officer with the intent to threaten, intimidate, harass, or stalk.”

According to the bill, this includes “name, address, phone number, Social Security number,” or “a photograph or any other realistic likeness.”

The bill goes on to say, “and as a result, causes, attempts to cause or would be reasonably expected to cause substantial emotional distress or financial loss to that person, or to that officer’s family or household member or intimate partner.”

The first offence would be a misdemeanor followed by a felony on the second offence.

Like the two court cases, this bill in Oklahoma blurs the lines of filming cops which tends to always benefit the state. So long as the act of filming police in public is up for interpretation, the potential for persecution exists.