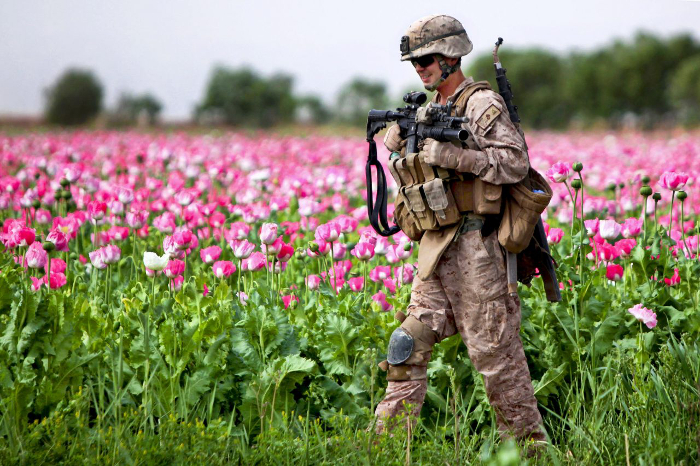 In Afghanistan, the world’s most powerful military is threatened by a small, pink flower.

Despite an escalation of the Afghan conflict under the Trump administration, a record opium crop, coupled with steady Taliban gains, foretell bitter fighting in the coming months for American forces and the Afghans stationed alongside them.

“Record-high opium production is but one indication of how badly U.S. efforts have failed and are continuing to fail,” said Andrew Bacevich, professor of history and international relations at Boston University and author of America’s War for the Greater Middle East. “It is both a major source of Taliban funding and an indication of how little control the Afghan government is able to exert.”

The Taliban and the Opium Trade

In November, the UN Office of Drugs and Crime released its annual Afghanistan Opium Survey. According to the report, 2017’s opium crop, estimated at 9,000 tons, marks an 87 percent increase from the previous year.

The record crop has left the Taliban flush with cash it will use to finance military operations, the wages of fighters, as well as arms purchases.

As the area under cultivation in Taliban territory grows, “we can conclude that more funds flow to the Taliban,” said Gretchen Peters, former ABC News foreign correspondent and an expert on the Afghan opium trade.

While many have enjoyed the plant’s small dark seeds on their bagels, at maturity poppies produce seed pods which contain opium, a sticky sap that is drained from the pods and dried. Opium’s alkaloids can be extracted and altered to produce a wide range of opioid narcotics, including morphine and heroin.

Over the last decade Afghanistan has been the world’s top producer and exporter of raw opium and heroin, in some years supplying much of the entire global heroin market.

The opium trade has long played a vital role in the Afghan economy and political landscape. The plant not only supplies farmers with a highly profitable cash crop and creates employment opportunities in rural areas, but proceeds from the opium trade also bolster local warlords and militant groups such as the Taliban.