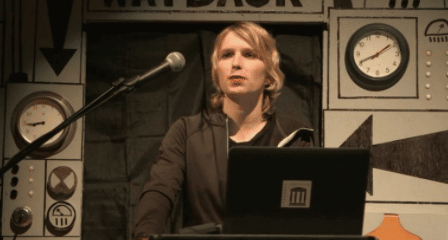 Working with Wikileaks almost a decade ago, Army intelligence analyst Chelsea Manning provided some of the most damning revelations on U.S. foreign policy and military atrocities in Iraq and Afghanistan.  Trump’s Justice Department indicted Wikileaks’ mastermind Julian Assange on 17 counts of espionage.  The feds arm-twisted Manning to testify against Assange, who is apparently suffering like hell while locked up in a British prison while his lawyers fight extradition to the United States (his chances of  a fair trial here are slim and none).  When Manning refused to testify to a grand jury, a judge slapped her with an 18 month jail sentence and a $1000 a day fine.   Manning is in federal lockup in Alexandria, Virginia and could be locked up for most of the next year.  But, as Manning told the judge, “”I would rather starve to death than to change my opinion” on testifying.

Manning explained her refusal to answer questions about the release of information in 2010: “In solidarity with many activists facing the odds, I will stand by my principles. I will exhaust every legal remedy available. My legal team continues to challenge the secrecy of these proceedings, and I am prepared to face the consequences of my refusal.”

When Manning was sentenced to 35 years in a disgraceful court martial in 2013, she explained why she provided documents to Wikileaks: “Whenever we killed innocent civilians, instead of accepting responsibility for our conduct, we elected to hide behind the veil of national security and classified information in order to avoid any public accountability.”  Thanks to Manning, Americans learned about  Secretary of State Hillary Clinton’s machinations to steal the credit card numbers of foreign diplomats, the U.S. government’s role in spurring Ethiopia to attack Somalia, the string pulling by U.S. government across Europe to derail investigations of U.S. torture, the U.S. government’s secret, dishonest war in Yemen, and a heap of other outrages.

If you want to preserve or revive freedom, then knowing what the hell government is doing is most helpful.  That’s why we need to cheer and support heroic whistleblowers like Manning and Assange.

Manning is on Twitter and apparently does receive messages there.  I sent Manning a message late Tuesday evening asking the best address or means for people to send their best wishes for Thanksgiving.  Have not heard back so the default  is — https://twitter.com/xychelsea.  It appears that the message option – the little envelope with a circle around it next to the Follow button – is working.  I’m not sure what restrictions may exist in accessing Twitter via federal confinement.

Here is the mailing address for sending letters, cards, or whatever –

Here are a few of my tweets on Manning –

Stephen Colbert deserves an Emmy Award for this 4 minute segment on the Bradley Manning case and trial verdict https://youtube.com/watch?v=_TJDZax426I

Here’s a USA Today oped I wrote last year on  Wikileaks, Manning, and why Julian Assange should get a Presidential Medal of Freedom.