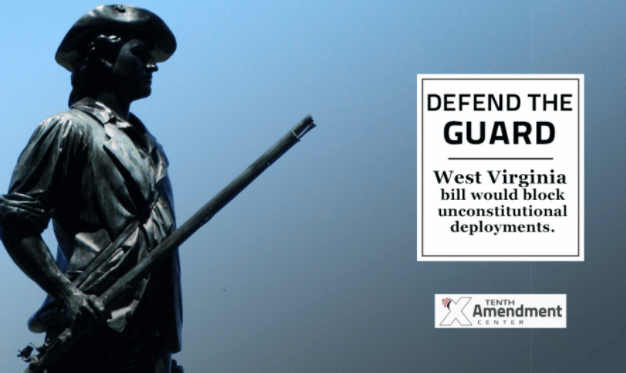 CHARLESTON, W. Va. (Feb. 10, 2020) – There was political drama in West Virginia last week as the sponsor of a bill that would prohibit unconstitutional foreign combat deployments of the state’s national guard troops narrowly failed in a parliamentary move to get it discharged from committee. Even so, support for the legislation is growing.

**If you live in West Virginia, scroll to the bottom of the report for important action steps.

House Bill 2732 (HB2732) would prohibit the deployment of West Virginia Guard troops in “active duty combat” unless there is a declaration of war from Congress, as required by the Constitution.

Last Thursday, bill sponsor Del. Pat McGeehan (R-Hancock) used a parliamentary maneuver to try to discharge the bill from the House Veterans Affairs and Homeland Security Committee. Sources close to the Tenth Amendment Center say that committee chair Del. Tom Bibby (R-Berkeley) put the bill on the committee schedule but then withdrew it due to pressure from Speaker of the House Del. Roger Hanshaw (R-Clay).

McGeehan’s attempt to bypass the committee process and bring the bill directly to the House floor failed by a tie 50-50 vote.

But the effort was not a complete loss. It sparked a 30-minute debate on the House floor that drew significant media attention in the state.

McGeehan served as an Air Force intelligence officer with tours in Afghanistan and the Middle East. He said war is the most serious operation, most serious enterprise a government could engage in.

“It’s near and dear to my heart, because it’s been clear to me that over the last two decades we’ve had this sort of status quo where it is somehow acceptable for unilateral action to be taken not by just the executive, but also the Pentagon to send our men and women in the Armed Forces overseas into undeclared wars and unending wars,” McGeehan said.

Several veterans spoke in favor of the bill, including Bibby.

“Any discussions when it comes to war and peace, those are important things we need to talk about — where we are headed,” Bibby said. “We’ve gone far from where our Founding Fathers wanted us to be. It’s important we take a stand. We want our nation to be strong, but we’ve got to stop the endless wars we’ve had in the last 50 years.”

Bibby committed to bringing the bill up in committee.

Del. S. Marshall Wilson, (I-Berkeley) also spoke in support of the bill. Wilson served in the Army and said his daughter is currently deployed overseas with the Guard. His son plans to apply to a military academy.

“They are going to take my kids,” he said. “They have to answer for it.”

In an op-ed, the Morgantown Dominion Post wrote, “”For the record, our newspaper supports HB2732.”

“It’s obvious that Congress has abdicated its duty to declare war, ceding absolute power to the president, who in turn has abused his authority over Guard units. That thought is not just directed at President Trump, but every Democratic and Republican administration since at least the 1950s, that have all engaged in this abuse of the Guard’s members and their families for too long.”

It appears that public support is also behind the measure. In an online poll hosted by the Huntington West Virginia Herald-Dispatch, support was almost 2-1 in favor of the bill.

Guard troops have played significant roles in all modern overseas conflicts, with over 650,000 deployed since 2001. Military.com reports that “Guard and Reserve units made up about 45 percent of the total force sent to Iraq and Afghanistan, and received about 18.4 percent of the casualties.” More specifically, West Virginia National Guard troops have participated in missions in Iraq, Afghanistan, Libya, Kosovo and elsewhere.

Since none of these missions have been accompanied by a Constitutional declaration of war, the Defend the Guard Act would have prohibited those deployments. Such declarations have only happened five times in U.S. history, with the last being at the onset of World War II.

HB2732 is scheduled for a hearing in House Veterans Affairs and Homeland Security Committee. on Feb. 11, at 2 p.m.