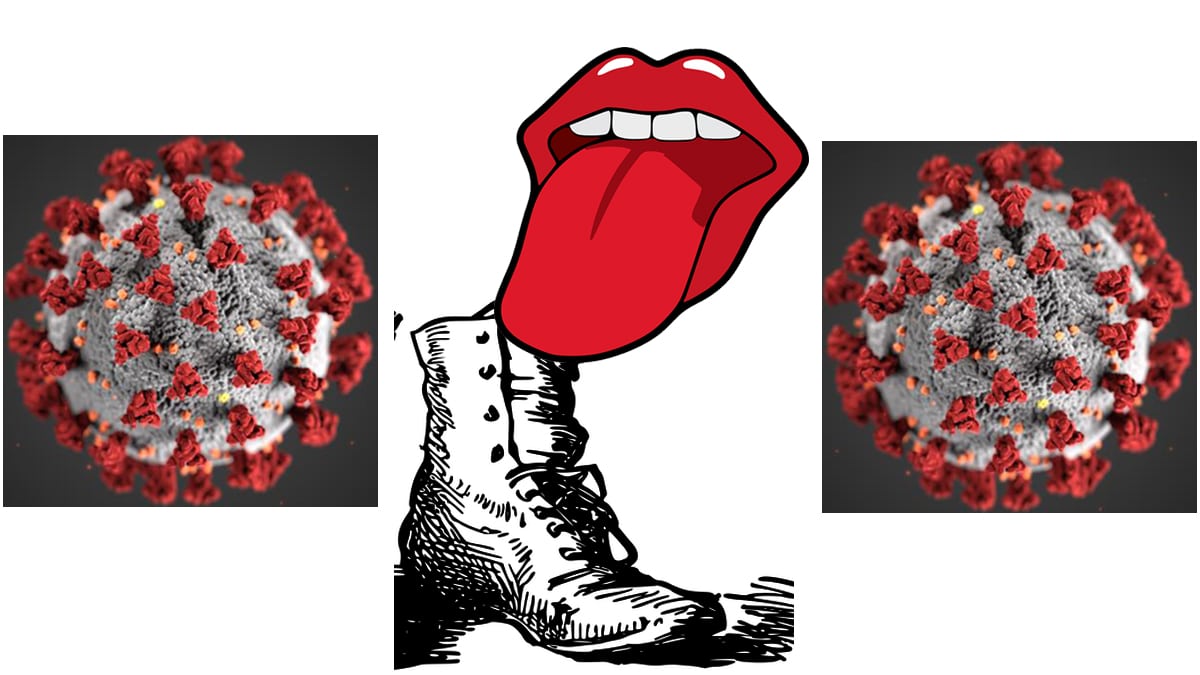 The COVID pandemic has shown how easy it is to make people hate anyone who is not as frightened as themselves. Since last March, politicians and health officials have fanned fears to commandeer far more control over Americans’ daily lives. And millions of Americans have been happy to condemn any violators of the endlessly changing rules.

After the start of the COVID pandemic, my local Harris Teeter grocery store in Montgomery County, Maryland voluntarily made extensive changes to safeguard its employees and customers. But one panicky customer wailed to the local health department that he felt unsafe while buying his bagels or whatever at the store. A health inspector swooped in and compelled the grocery store to restrict access and services in numerous pointless ways. One of the two wide doors at the front of the store was designated as “Exit Only,” with four signs attached warning customers not to enter.

On a recent Thursday, I was making a quick mid-afternoon run to that store and headed for the doors I always used adjacent to the parking lot.

I saw a customer getting ready to exit so I paused 10 feet away from the door. He was a heavyset guy in his 40s with a cop-style haircut. He was wearing a fashionable flimsy face mask that provides as much protection from COVID as wrapping your head with wet toilet paper. He was pushing his loaded grocery cart through the wide doors—until he saw me. He instantly pulled his cart back and the second set of automatic doors closed while he stared at me like he’d seen a viral demon poised to strike him down.

From safely behind the glass doors, he anxiously pointed his arm to the other side of the store, where the designated ‘Entrance Only” signs paved the path to compliance.

I just stood there.

He pointed again, even more fretfully.

I just stood there.

He finally pushed his cart forward and the automatic doors opened.

“THIS IS THE EXIT—exit only!’ He exclaimed.

“Ya,” I replied nonchalantly as I waited for him to get out of the way so I could enter.

“That’s not allowed,” he declared.

“The separate exit and entrance for the store is a health department dictate that makes no sense.”

“People have to follow the rules to keep us safe,” he said with the air of someone reminding a village idiot of a self-evident truth.

“If the Health Department said grocery store customers have to hop around on one leg, would you do that, too?”

“What—are you like the people who stormed the Capitol?” he barked as his eyes bulged.

I laughed. “You’re a bootlicker.”

I gave him a Chesire grin which he could maybe appreciate because I wasn’t wearing a facemask.

He stomped his feet and pushed his grocery cart off into the parking lot while muttering about someone being an “asshole.” I wasn’t sure who he was referring to so I didn’t take offense.

Montgomery County, Maryland is probably one of the most pro-government locales in the nation, thanks in part to being populated by government workers, government contractors, and other people ruined for life by high school civics classes. There is practically no spot inside its borders exempt from indignation against people who have not submitted to the latest edict.

I was recently walking along the C & O Canal Towpath, talking to two friends. None of us were masked – despite a histrionic health department dictate that everyone should cover their faces any time they step out of their house.

Coming in the opposite direction was a geezer, walking slumped forward with a long white shirt, big floppy hat, and a six-foot walking stick. He suddenly stops and points his stick at me and shouts:

“So what are you supposed to be, an Old Testament prophet?” I said. “Great—so now we got the Prophet Isaiah casting damnation on all Towpath violators.” I should have counted my blessings that he wasn’t like Coleridge’s Ancient Mariner, buttonholing people and forcing them to listen to a 45-minute poem about a dead bird.

That Towpath turned out to be a hotbed for righteousness. A few weeks later, I was walking along with a group of fellow hikers, chatting about how the 2020 election had completely restored out faith in American democracy. As we neared a wooden bridge, a 50ish guy coming the other direction suddenly stopped and looked as horrified as a vampire who had spotted a Crucifix.

He lifted his shirt up over his face to provide double protection along with his facial covering, and shouted, “YOU’RE NOT WEARING MASKS!”

“We’re outside. It’s sunny. The wind is blowing,” I replied. The dude was perhaps unaware that COVID transmission hinges on “viral load,” which wasn’t happening on that hike.

“You’re violating the rules!” he proclaimed.

We just kept walking past him.

He turned and shouted at me: “So what—is your beard supposed to be your mask!?!”

And then he hollered: “Your beard is ugly!” 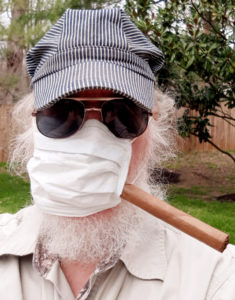 Durn! Now I finally know why my applications to be the cover model for GQ have always been rejected. Me and Rodney Dangerfield—no respect.

Unfortunately, there will likely be far more Americans screaming at each other thanks to President Biden’s new mandate compelling people to wear masks on all federal property and while traveling across state lines. Biden’s edict, like many other Washington decrees, contained an unwritten “Poohbah Exemption.” Hours after signing the mandate, Biden and family members were not wearing masks when they visited the Lincoln Memorial. At a daily press briefing, Biden spokeswoman Jen Psaki scoffed at a reporter’s concern over the apparent crime: “He was celebrating a historic day in our country…We have bigger things to worry about.”

Biden’s mask mandate is being touted as one of the silver bullets against COVID-19. But 80% of Americans “have been wearing masks since July. They didn’t meaningfully alter the pandemic’s course,” notes economic historian Phil Magness of the American Institute for Economic Research, which has done some of the best debunkings of COVID hysteria.

Federal, state, and local government restrictions have failed to prevent more than 100 million Americans from becoming infected with COVID. But that hasn’t cured blind faith in the Iron Fist of government decrees—perhaps the only item of faith remaining for affluent people hunkered down and fretting about their next grocery delivery. The New York Times, in a piece headlined, “Social Distancing Informants Have Their Eyes on You,” noted, “In some cities and counties, vigilantism has been encouraged by municipalities that have set up special phone numbers, apps or online forms to report violations.”

Neighborhood websites are overflowing with complaints, such as the Boston area resident who was outraged because “four teenage girls with lacrosse sticks and white hoodies just walked past our place.” “Massachusetts residents burning up the COVID-19 snitch line,” proclaimed a Boston Herald headline in October. Two hundred thousand complaints were registered, including against a neighbor accused of “spitting,” a maskless female stripper at Kittens Gentlemen’s Club, and a deluge of accusations against people whose masks had slipped beneath their nose. Shortly before Thanksgiving, Oregon Governor Kate Brown urged neighbors to summon the police if they noticed neighbors having too many guests for the big dinner—a proposal that one Oregon local official declared “turned people into ‘second-rate slaves’ in their own homes,” the Daily Mail reported.  The New York Times reported, “Some liberals said they thought that calling out violators was a civic duty and a matter of public health.” Many East Germans felt the same way about notifying the Stasi about subversive comments they overhead while waiting in line to buy cabbages. But some Americans should heed the warning a British publication gave to its readers: “Is constantly monitoring COVID rulebreakers wrecking your mental health?”

Much of the rage against folks who do not obey the latest commands stems from blind faith in “science and data”—the endlessly recited slogan of politicians and bureaucrats dictating new restrictions. But the unrecognized storyline of the pandemic is that the “science” is continually changing and much of the data is crap. Revered experts flip-flopped on issues such as whether surfaces are deadly contagious or whether asymptomatic individuals are perilous threats. False positive tests and catch-all definitions of COVID fatalities have made a mockery of accurate record-keeping. These problems were compounded by the World Health Organization promulgating much a stricter standard for Covid diagnoses on the day Biden was inaugurated, ceasing to count as Covid vast numbers of cases that were previously labeled as such. The new standard paves the way for a speedy reduction in Covid cases thanks to Biden’s benevolent leadership.

But Pandemic Security Theater will continue to spur snitching by people who view other Americans’ freedom as the deadliest threat to their own health. That guy who blocked the door at my local Harris Teeter may never have been called a bootlicker before. Sadly, this is a title that millions of Americans have earned over the past year.