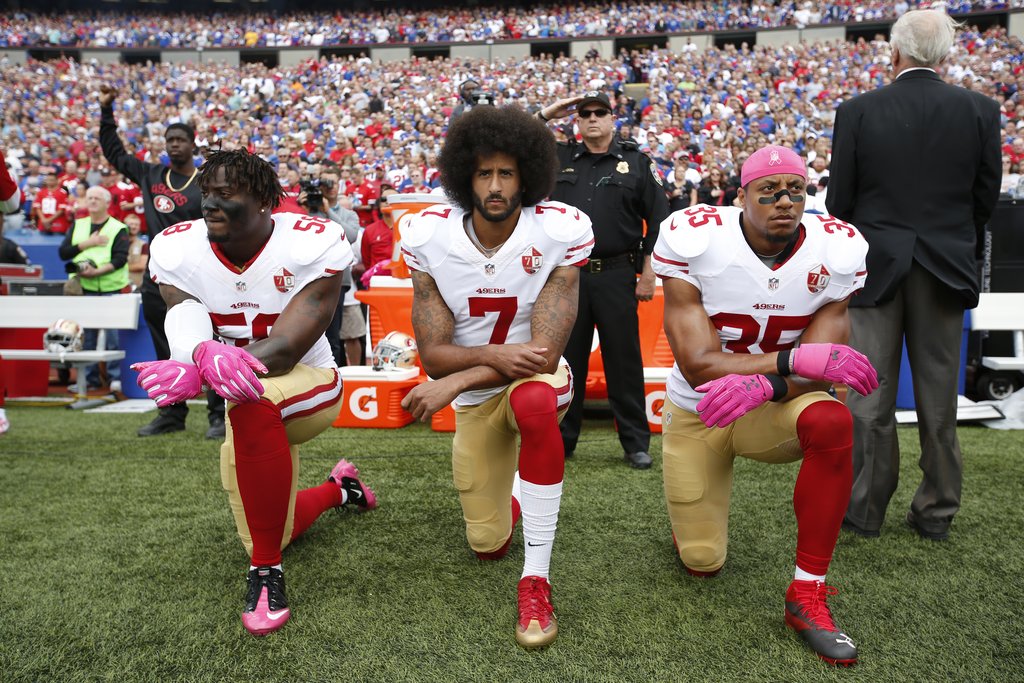 Defenders of Donald Trump’s condemnation of NFL players who “take a knee” during the national hymn — sorry, anthem — beg a few questions. They assume the truth of matters that are or should be in dispute. So, not so fast, Trump defenders. You have work to do.

The first question begged is whether kneeling or sitting during the “Star Spangled Banner” is an act of disrespect to “the country,” the flag, the song, or the military. It’s not enough to assume it is. Trump and his defenders have to demonstrate this, which would be difficult since we’re talking about a state of mind. Any behavior can be consistent with many states of mind. Maybe one player or another intends disrespect, but disrespect doesn’t seem to be the message most players wish to send. In fact, some have been quoted saying they mean no disrespect. Rather, they say, their actions are meant to express their belief that the ideals supposedly symbolized by the flag are being dishonored, for example, by police mistreatment of black people. Who’s to say the kneelers are lying?

That could end the discussion, but I think a much larger question is begged by Trump and his defenders. People sympathetic to Trump’s tweets — for example, former generals and CIA directors Michael Hayden and David Petraeus — lament the kneeling because, they say, football of all things should not be “politicized.” Their mistake is in thinking that the players initiated the politicization.

Football, like other professional sports, first politicized its games by displaying the flag, playing the national anthem, and lauding the military. To assume those things are not political is to beg a whole lot of questions.

The flag necessarily is a political symbol, and so is a song that sacralizes it. The country, which the flag is said to symbolize, is a political entity. The term the country is rarely meant to indicate merely the middle North American civil society that exists south of Canada and north of Mexico. That term is inextricably tied up with the government of the United States of America. Most people couldn’t imagine the country without the government. Trump and his defenders certainly cannot. Indeed, they think it holds society together, for example, by securing its borders.

While some people certainly believe the flag symbolizes freedom, one is justified in seeing it as a symbol of something rather different — of war, empire, and oppression at home and abroad. Empire-building began at the very start with the attempted extermination or expulsion of the Indians. The government supported the buying and selling of human beings.

Yes, that was long ago, and some amends have been made. But that flag was carried (I’ll avoid a tediously long list) to the Philippines, Japan, Germany, Korea, Vietnam, Afghanistan, Iraq, Syria, Libya, and all the other places where the U.S. government and its armed forces waged and still are waging war (conventional, chemical, nuclear, etc.), imposed or supported tyrants, and killed and tortured innocents. That flag is emblazoned on warplanes and naval destroyers, not to mention the uniforms of men and women who, on the orders of hack politicians worried about their political futures, ignorantly barge into other people’s countries with the intent to kill.

And we shouldn’t overlook domestic oppression, like the war on drug users, merchants, and manufacturers, which has been an effective cover for the persecution of blacks and Latinos. Police wear the flag too.

So the flag is inherently political and controversial. Thus, reacting to it by kneeling or sitting or turning one’s back can hardly be deemed an initiation of politicization. It’s just an inevitable response.

That most people don’t see the state and its symbols as political is a testament to the effectiveness of government education and the obsequiousness of the mass media. TV interviewers are obligated to thank present and former members of the armed forces for their “service to the country,” and we’re regularly told that Americans died for the flag. (Really?) Questioning any of this is heresy. You may criticize a given war — as long as you call it a mistake and not a crime — but don’t dare go deeper than that, and especially don’t disrespect the warriors — “the troops” — who “fought for your freedom and your right to dissent.”

But what if they didn’t actually do that? What if the wars, and therefore the warriors’ lethal activities, were in fact opposed to the interests of the people? What if the wars were the schemes of self-serving and dishonest politicians and their whiz-kid social engineers? What if it’s all been a “racket,” as U.S. Marine Maj. Gen. Smedley Butler said it was? After all the indisputably bad consequences in this young century, who can still think the wars in the Muslim world have benefited anyone outside the ruling class and the military-industrial complex?

Sacralization of the flag and uniform — and the anger directed at even mild dissent — are further demonstrations that, contrary to popular myth, church and state in this country have not been separated. They have been fused. The church is the state, and the state is the church. That’s where nationalism takes you.

Those who don’t want sports politicized should say: no flags, no anthem, and no military. Rid private functions of all symbols of the church-state. Then play ball.

By all means, let’s take politics out of sports and other public events.