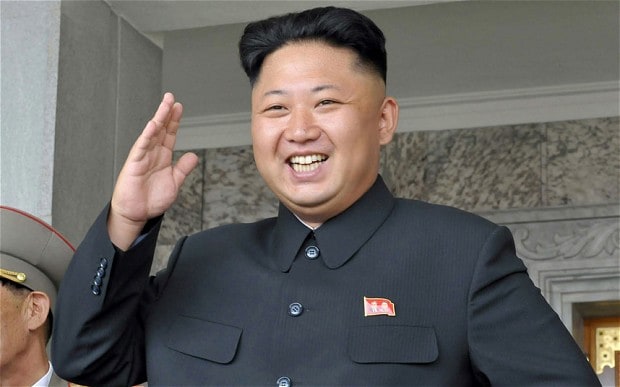 There’s little more we can do than hope that some cool heads around Donald Trump are telling him he’d be nuts to attack North Korea. I don’t know who they might be. Still, we must hope.

It doesn’t take a lifetime of study to know that, fortunately, no military resolution of the standoff is available. Ten million South Koreans live within artillery reach of the capital of Seoul, some 30 miles from the demilitarized zone separating North and South. Nearly 30,000 U.S. military personnel are around there too. North Korea has thousands of underground and undersea military facilities that American bombs and missiles would not find. A conventional U.S. attack would be catastrophic, a nuclear attack far, far worse, for the horrifying effects would spill over to China and Japan.

So what would be accomplished? Nothing good. That’s for sure.

Where, then, is the Trump from a year ago? You know, the one who said, “I would speak to him [North Korean tyrant Kim Jong-un]. I would have no problem speaking to him.”? As we well know, there are many Donald Trumps. Well, that’s the one we need now. Instead we have sabre-rattling Trump, along with Vice President Pence and others on the national-security squad.

The two governments have much to talk about. (Alas, as long as we’re stuck with the Westphalian system, we must make the best of it.) First things first. And by first, I mean peace.

Yes, Kim, like his father and grandfather before him, is a tyrant. But when has that ever stopped an American president from dealing with — and often befriending — a ruler? Never. American presidents have allied with some of the most ruthless heads of states of the 20th century. Trump recently entertained a tyrant — al-Sisi of Egypt — at the White House, praising him profusely. Then he called the head of Turkey — Erdogan — to congratulate him on expanding his autocratic powers through the ballot box. Nixon went to meet Mao Zedong, one of the great mass murderers in history, to open normal relations with what we once called Red China.

Kim and North Korea, therefore, are not unique in that respect. But they are unique in another way. The U.S. government fought an undeclared war — sorry, police action — alongside South Korea’s own tyrant — Syngman Rhee — against North Korea and Kim’s grandfather — Kim Il-sung — from 1950 to 1953 because President Harry Truman didn’t want the Republicans saying he “lost Korea.” The U.S. Air Force obliterated the country through carpet bombing after Truman decided atomic bombs were not practical, in contrast to Hiroshima and Nagasaki, Japan, a few years earlier. (For evidence the U.S government committed war crimes with biological and chemical weapons, see this. Also see this.) The bombing and shooting stopped with an armistice, but no peace treaty was ever signed to formally end the war. For decades, the North Korean government has sought that treaty and a nonaggression pact with the U.S. government, but the requests always fell on deaf ears.

Finally, in 1994 President Bill Clinton reached an agreement with the North Korean government. First, a little more background. A decade earlier North Korea had signed the Nuclear Non-Proliferation Treaty (NPT), agreeing not to develop nuclear weapons and making it subject to inspections by the International Atomic Energy Agency (IAEA). But North Korea refused to give the IAEA access to information and suspected sites, so the agency found North Korea in noncompliance with its NPT agreement in 1993 on suspicion that it held undeclared plutonium. North Korea then announced plans to leave the NPT.

Things looked bleak until North Korea asked to meet with the U.S. government to settle their disputes. The Clinton administration agreed — on the condition that the IAEA have all they access it had sought. North Korean eventually agreed. In turn the administration called off annual war games with South Korea — North Korea had been insisted on that — and began negotiations. Clinton also conditioned the talks on continued IAEA access and North Korean negotiations with South Korea.

Under the resulting “Agreed Framework,” North Korea would convert its nuclear industry from heavy- to light-water reactors for power generation. In the meantime the U.S. government would provide it oil for heat and electricity. In addition the governments would normalize political and economic relations, and the U.S. government would forswear the use of nuclear weapons against North Korea, which would remain a party to the NPT, with all this implied for IAEA inspections.

All of this was most promising. North Korean froze its plutonium program beyond Clinton’s tenure, until 2002, and the administration, writes historian Bruce Cumings, “in October 2000, had indirectly worked out a deal to buy all of its medium- and long-range missiles. Clinton also signed an agreement with Gen. Jo Myong-rok stating that henceforth, neither country would bear ‘hostile intent’ toward the other.”

However, as Fareed Zakaria writes, “the brief effort at cooperation during the Clinton years was halfhearted, with Washington failing to fulfill some of its promises to North Korea. In any event, the rapprochement was quickly reversed by the George W. Bush administration.” As Cumings puts it, “The Bush administration promptly ignored [the] agreements and set out to destroy the 1994 freeze.” Mike Chenoy adds, “After a review of Korea policy, Bush declined to reaffirm the communique pledging ‘no hostile intent.’ Meanwhile, leading conservatives in his administration — Vice President Dick Cheney, Defense Secretary Donald Rumsfeld, Undersecretary of State John Bolton and others — actively sought to torpedo the Agreed Framework.”

Recall that Bush’s 2002 State of the Union speech included North Korea in his infamous “axis of evil” after the administration accused — without providing evidence — that North Korea had abrogated the agreement. “The results have been clear,” Zakaria writes. “North Korea has continued to build its nuclear program and engage in provocative tests. As isolation and sanctions have increased in recent years, Pyongyang has only become more confrontational.” It pulled out of the NPT and embarked on its current program to develop nuclear weapons and intercontinental ballistic missiles. Gordon Prather writes, “With the Agreed Framework unilaterally abrogated and its associated shipments of American fuel-oil permanently halted, the Koreans apparently felt they had no choice but to withdraw from the NPT, rip off the IAEA seals and padlocks, restart their plutonium-producing reactor and resume recovery of weapons-grade plutonium.”

As Cumings writes, “The simple fact is that Pyongyang would have no nuclear weapons if Clinton’s agreements had been sustained.”

A later attempt in the Bush years to deal with North Korea in a multilateral context that included Russia and China bore no fruit. (The new effort began when Condoleezza Rice’s State Department had gained an advantage over Vice President Dick Cheney. At one point it included removing North Korean from the terrorism list.) In 2009 Prather noted that “what China and Russia have been attempting to do, since 2005, via the Six-Party talks, is to help clean up the mess Bush-Cheney-Bolton made on the neighboring Korean peninsula.”

The problem was that North Korea had been given no reason to trust the U.S. government. Prather described the context of “Second Phase Actions” of October 2007: the purpose was “to effectively re-instate the Agreed Framework of 1994, except that now North Korea has –- somewhere –- at least a half-dozen plutonium-239 based nukes, definitely not under IAEA padlock or seal. Furthermore, North Korea is no longer a signatory to the NPT. Hence, North Korea is under no international obligation to give up its nuke stockpile.”

Bush-Cheney-Bolton had indeed made a royal mess of things. Presient Obama then refused several offers for a mutually beneficial deal. Remember this the next someone asks, “Can we trust North Korea?” The more appropriate question is whether North Korea can trust the U.S. government.

Decades of embargoes and other attempts to isolate North Korea have failed to destabilize the regime or change its policies. Every administrations’ expectation that the government would fall have been dashed. Thus more of the same, including efforts to have China join in isolating North Korea, won’t work. We should recall how U.S. economic warfare against Imperial Japan turned out: it resulted in a (hoped-for) attack on the United States, specifically, its naval fleet at Pearl Harbor.

Let us dispense, once and for all, with the idea that Kim is a madman. Brutality is not madness, and a madman wouldn’t be expected to capitulate to economic pressure. He shows every sign of wanting his regime to endure, which means he would not want the U.S. military or nuclear arsenal to pulverize it. Assuming rationality in this context asserts only that Kim’s means are reasonably related to his ends. For example, Kim shows every sign of having learned the lesson of recent U.S. regime-change policies toward Iraq and Libya, neither of which were nuclear states. Same with Syria, whose regime has been targeted by the U.S. government. The lesson is: if you want to deter a U.S. attack, get yourself some nukes.

The upshot is that negotiation of a clear nonaggression pact and a U.S. renunciation of preemptive war and the use of nuclear weapons has a good chance of succeeding. This is the way to go. Meanwhile, Trump should withdraw the America troops. That would be a good start in liquidating the empire.