TGIF: The Iraq War after 15 Years

TGIF: The Iraq War after 15 Years 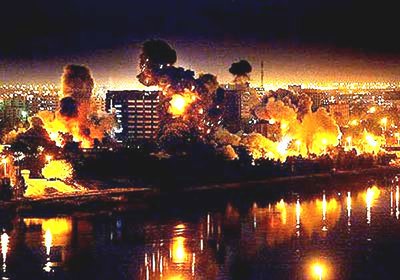 On the 10th anniversary of the U.S. government’s criminal, catastrophic, and still-to-this-day consequential war against Iraq in March 2003, I wrote:

It is no exaggeration to say that most news operations were little more than extensions of the White House Office of Communications. Abandoning even the pretense of an adversarial relationship with the government, the media became shameful conduits for unsubstantiated and outright false information about Saddam Hussein’s alleged threat to the American people. Included among the falsehoods were reports that Saddam had a hand in the 9/11 attacks, had trained al-Qaeda fighters, and had attempted to obtain uranium ore and aluminum tubes for nuclear bombs.

Put bluntly, the disastrous invasion of Iraq, which was sold on the basis of lies told by President George W. Bush, Vice-President Dick Cheney, [CIA Director George Tenet,] Secretary of State Colin Powell, Defense Secretary Donald Rumsfeld, national-security adviser Condoleezza Rice, and others might not have happened without the enthusiastic help of the New York Times, Washington Post, Wall Street Journal, ABC, NBC, MSNBC, CBS, CNN, Fox News, and others. The blood of more than a hundred thousand — perhaps more than a million — Iraqis and 4,500 [now nearer to 5,000] Americans is on their hands too.

For a variety of reasons — jingoism, cowardice, money, and fame — media personnel were eager suckers for the government’s hired war peddlers, who repackaged the bogus “findings” that poured from the politicized Bush-Cheney intel complex and set out to scare the hell out of the American people. Apparently no thought whatever was given to the likely consequences, either domestic or foreign, despite warnings from across the political spectrum. We are still living with those horrific consequences, which extend far beyond the Middle East and South and Central Asia, and will be for some time.

Now we mark the 15th anniversary of a foreign-policy decision that rivals Woodrow Wilson’s entry into World War I in its recklessness and cruelty — yet a proper assessment of the atrocity perpetrated by the George W. Bush presidency, aided and abetted by the most prestigious newspapers and television networks in the land, is as elusive as ever. If anything, things have regressed. In an eagerness to paint Trump as the most evil person who has ever lived, many pundits, including Democrats, have found it expedient to look with favor on the execrable Mr. Bush despite the chain of disasters he set in motion in March 2003. As readers well know, my respect for Trump is at far less than zero, but I don’t think anyone looks good merely by comparison to him. Trump may end up doing something worse than Bush’s invasion of Iraq — here’s one reason why — but he hasn’t so far. Trump is bad, but that is no reason to blur history. All that does is help people forget Bush’s many victims.

I closed the article five years ago with this:

This story of media malfeasance would be bad enough if it were just history. Unfortunately, even as media figures now issue mea culpas about their shameful Iraq “coverage,” they are engaged in precisely the same shoddy business with respect to Iran and its alleged but unproven nuclear-weapons program.

The pundits and “reporters” have stuck to their Iran fiction — even those who approve of the Iran nuclear deal talk as though it is the only thing that stands between the Islamic Republic and the nuclear arsenal that would promptly use to destroy Israel and the United States. And the establishment media — think of them collectively as America Today, or AT — have now added Russia to their roster of bogeymen ready to jump from every alley and slit our throats. Once again Americans are the target of a fear-mongering campaign that will have no other effect than to strengthen the national security/surveillance state and perhaps set off a shooting war, if not a nuclear war, against Russia in Syria, Ukraine, or eastern Europe.

Business Insider was only the most heavy-handed when it headlined an AP story thus: “How Putin’s big election ‘win’ emboldens Russia to keep pushing aggressive anti-Western policies.”

BI didn’t bother to provide any context to help readers determine if a given Russian move was aggressive or defensive. How does one decide if the annexation of Crimea was unprovoked aggression if one does not know that the U.S. government sponsored a coup (with help from neo-fascists) that drove a constitutionally elected, Russia-friendly president from office and that the U.S. government acting as NATO was now in a position to encroach on Russia’s only warm-water port, in the Black Sea? How can Americans interpret anything Vladimir Putin (no fan here) does without being reminded (or told for the first time) that Presidents Clinton, Bush, Obama and now Trump all — in violation of an American pledge — expanded NATO to the Russian border by adding states that once were in the Soviet orbit. The presence of American and NATO troops on that border and the placement of destabilizing anti-missile technology nearby would also seem to be useful facts when deciding who’s aggressive and who’s defensive.

Such thoughts can get you into trouble. We’re just expected to assume that anything any Russian does — or is imagined to have done — is tantamount to an act of war against America and all that is right and good in the world. No need to actually inform, is there? Who needs evidence?

Angela Charlton’s AP story states, “Despite a friendly-ish relationship with President Donald Trump, Putin’s new mandate gives him little incentive to seek entente with Washington, especially as the investigation of alleged Russian interference in the 2016 U.S. election intensifies.” (Emphasis added.) I would say that any chance for entente — which was one of the very few good things candidate Trump called for — was premeditatedly smothered in its cradle by the bipartisan anti-Trump, pro-empire alliance that has worked to undermine his administration by asserting — but never proving — that 1) Putin’s government tried to rig the 2016 election by hacking and releasing Democrats’ email accounts and advertising in social media, and 2) all this was done with the full knowledge and cooperation of the Trump campaign.

All this goes to show that media have learned nothing since 2002-03, when Bush & Co. plotted their lie-based, Nuremberg-violating war of aggression against Iraq, which has left that country a shambles. (“2017, Trump’s first year in office, turned out to be the deadliest year for civilians in Iraq and Syria since U.S. airstrikes began on the two countries in 2014…. The ongoing carnage is considered perfectly normal, barely even eliciting a comment from the pundit class,” Nat Parry writes.) We shouldn’t be surprised that they’ve learned nothing — they have no incentive learn. Almost no one suffered a career setback because of the deception they contributed to — indeed, the same foreign policy “experts” are regulars on the networks and in the op-ed pages, still calling for war and insisting that we trust the intel complex’s scary accounts about Russia’s plan to end our democratic way of life.

The perpetrators of the Iraq war paid no price for their crimes — take a moment to think of the cascading evils that have followed! — and the abettors in the media have gotten away with their malfeasance as well. It would be nice to see a little justice meted out.