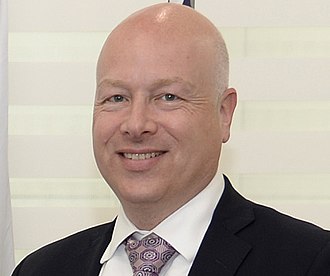 Jason Greenblatt, Donald Trump’s No. 2 special envoy to the Middle East behind son-in-law Jared Kushner, assures us that his boss’s plan to settle the Palestine-Israel “conflict” once and for all is still in the works and is going to be great. (It’s a conflict in the same way that a confrontation between a car owner and a car thief is a conflict.)

In an interview with the Times of Israel, Greenblatt said the plan “will include a resolution to all of the core issues, including the refugee issue, and will also focus on Israel’s security concerns.” It will, he continued as if the reporter didn’t hear him the first time, “be heavily focused on Israeli security needs,” adding, “But we also want to be fair to the Palestinians. We have tried hard to find a good balance. Each side will find things in this plan that they don’t like. There are no perfect solutions.”

Previous peace proposals were brief and vague, and no one really understood what exactly was meant by some of the terms used. We will present something that will give both the Israeli and the Palestinian people a concrete idea of what a peace deal could look like.

It’ll be very specific so that they [the Palestinians, presumably –SR] can tell their leaders what they think about it. In the end, we want people to think about whether our plan can make their lives better and is worth the compromises.

It’s obvious that the many reasonable criticisms leveled at earlier disclosures about the touted “deal of the century” have had no effect on Team Trump. Let’s have a closer look at what Greenblatt says.

“… will include a resolution to all of the core issues, including the refugee issue….” Bear in mind that Team Trump uses the word resolution differently from how the rest of us would use it in such a context. Team Trump means it will dictate an outcome, using all possible leverage to get the parties to take it and shut up. However, I don’t mean to imply that Team Trump is treating the Israelis and Palestinians as equals — far from it, but more on that below.

How do I know what Team Trump means? I’ve been paying attention; that’s how. Trump has already claimed to have resolved the refugee and Jerusalem issues simply through unilateral moves, moves that pleased the Israelis and pissed off the Palestinians, who are expected to relinquish any right of return for the dispossessed and to give up any hope for an East Jerusalem capital of any future state. (For details, see my “Trump, Spinoza, and the Palestinian Refugees.”) And Team Trump has cut all aid to the Palestinians, refugees or not, intending to redirect the money elsewhere (but not to the taxpayers) — unless they play ball.

“… will also focus on Israel’s security concerns… [and] be heavily focused on Israeli security needs….” This is the only thing that Greenblatt says will be focused on. Everything else seems like an afterthought. Strange isn’t it? Who’s been in graver danger in Palestine since the Zionist project got underway a century and a quarter ago, Jews or Palestinians? The question answers itself. The suffering of the Jews/Israelis in Palestine has been minuscule compared to that of the Palestinians, who, truth be told, have not only been the vast majority of Palestine’s inhabitants for more than a thousand years but are most likely the descendants not only of the original Israelites but of the pre-Palestine Canaanites. (See Shlomo Sand’s The Invention of the Jewish People and The Invention of the Land of Israel.) A proposal that focuses on Israel’s security means that any resulting Palestinian state would be a sham since it will be denied the basic means of protecting itself against its U.S.-armed neighboring hegemon, which has nuclear weapons in its vast arsenal. Israel has always insisted that any Palestinian state be demilitarized and have its borders controlled by you know who. You see, Israel and its U.S. enabler begin with the presumption that it is the Palestinians, the ones who were invaded and have been occupied, who must prove that they deserve to be free and independent. The Israelis have no burden of proof whatsoever.

This unalloyed tilt — a mild word for what’s going on — is not mitigated by Greenblatt’s follow-up: “We have tried hard to find a good balance.” What exactly is being balanced here? The claims of the beneficiaries of grand theft land and those of the victims thereof. How can those claims really be balanced?

“Each side will find things in this plan that they don’t like.” I can imagine. The Israelis won’t like that they won’t get every square inch of historic Palestine and therefore a 100 percent Palestinian-free Israel (in the short run, at least), and the Palestinians won’t like that they will be pressured to accept far less than even the 22 percent of the land that their so-called leaders long ago agreed to settle for. And what’s more, they won’t really get to govern the rump state consisting of isolated towns and villages as a proper country.

“There are no perfect solutions.” This is true. Past injustices can never be fully rectified. But “solutions” can be closer to or further from perfection, and we know which Team Trump’s solution will be.

“Previous peace proposals were brief and vague…. [Ours will] be very specific.” Indeed they will be. Team Trump approaches the “conflict” as though the Americans were parents settling an argument between two immature children fighting over Halloween candy of indeterminate ownership — except that in this case, only one side — the Palestinian — is presumed to be a stubborn, immature child who is unwilling to compromise.

“In the end, we want people to think about whether our plan can make their lives better and is worth the compromises.” This is no doubt a veiled reference to Team Trump’s objective to get the Palestinians’ minds off the injustices they’ve suffered — mass expulsion from their homes in 1947-48 (the Nakba), fifth-class citizenship for those who avoided expulsion, “apartheid” and oppression in the West Bank, detention and deprivation in the Gaza Ghetto — by offering them jobs. This is part of Trump’s grand strategy to isolate the Palestinians while aligning with those paragons of liberalism Saudi Arabia, Egypt, and Israel against Iran. (For details on this grand strategy, see Ted Snider’s “Outside In: The Trump Administration’s Plan to Remake the Middle East.” I’ve put apartheid in quotes because, per Gilad Atzmon, while the South African whites wanted to exploit the blacks, the Israelis want to kick the Palestinians out.)

Clearly, Team Trump has abandoned even the pretense that the U.S. is merely an “honest broker” in the conflict. It sees itself instead as the unabashed pro-Israel dictator of terms. In this context, optimism comes tough to those who care about justice, freedom, and dignity.