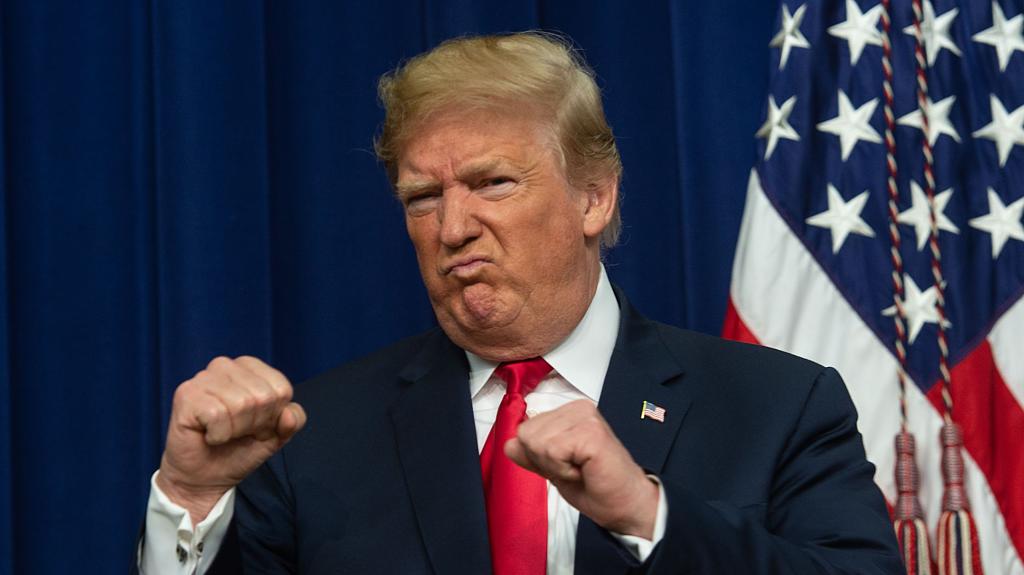 TOPSHOT - US President Donald Trump addresses the Face-to-Face With Our Future event at the White House in Washington, DC, on June 27, 2018. / AFP PHOTO / NICHOLAS KAMM

Beyond any reasonable doubt, in substance if not in appearance, Donald Trump is a thoroughly conventional American politician. It’s a wonder that anyone requires proof at this late date.

This couldn’t be clearer than in foreign policy. Some of us who understand the links among freedom, free trade, durable prosperity, and a noninterventionist foreign policy always doubted the sincerity of Trump’s occasional renegade soundbites during his presidential campaign. But some fantasists fell for them, and they refuse to let go of their tissue-thin hope that this execrable man will liquidate the American empire. Nothing will convince them, so efforts at persuasion are futile.

The funny thing is that Trump himself seems to be working hardest to persuade those supporters that he has no intention of changing U.S. foreign policy. He would no more liquidate America’s global empire than liquidate his own global business empire. Alas, America is not going anywhere. Sure, he may hector imperial allies to spend more on their militaries (while insisting he respects their sovereignty), but that’s just a show. He’s an all-in imperialist, so we shouldn’t be fooled by the staged populism that sometimes is mistaken for come-home-Americanism. America First in practice embodies George H. W. Bush’s summation of America’s foreign policy: “What we say goes.”

As Glenn Greenwald writes about Trump’s disgusting relationship with Saudi Arabia, it’s “a perfect example — perhaps stated a little more bluntly and candidly than usual — of how the U.S. has conducted itself in the world since at least the end of World War II.”

Forgive me for repeating myself: Trump is a caricature of a conventional American politician — which is why the political establishment despises him so. He lacks the diplomatic costume that makes brutality acceptable or at least enables people to live comfortably with their heads in the sand. But he’s just another faithful defender of the empire, and as such, he needs an enemy. In fact, he has plenty; take your choice: China, Iran, — and, yes — Russia. If someone thinks North Korea is a counterexample, I can only laugh. He has unsavory friends too: Israel, Saudi Arabia, the United Arab Emirates, assorted right-wing politicians in other regions. (He is indifferent to what appears to be the barbaric state murder of Jamal Khashoggi, giving the crown prince an out by calling Khashoggi an “enemy of the state” and a Muslim Brotherhood sympathizer and saying that the whole world is really to blame. He also praises the kingdom for lowering oil prices. Does he not know how stupid and naive that sounds? Or does he merely believe his fans are stupid and naive? And why does he not praise low prices for other imports?)

Markers of his devotion to the empire include big boosts in military (please, not defense) spending; his doubling down on the endless Middle East wars (including Yemen); his insane withdrawal from the Intermediate-Range Nuclear Forces (INF) treaty, which Reagan and Gorbachev struck in a major step back from the Cold War; continued expansion of NATO (which he pretends to disdain), and his arming of the fascist-infested Ukrainian government.

The latest exhibit in the case confirming Trump as a conventional American politician comes from the New York Times. It reported yesterday that the current White House occupant is doing what his predecessors have done at least since the onset of the Cold War: insisting that countries have no choice but to side with the United States or with one of its perceived enemies, in this case China.

“The rivalry, which has reached a new pitch and scope, is now centered on the trade war that President Trump started this year [which is actually a war on Americans],” the Times reported. “But tensions have also sharpened over a broad range of diplomatic and military issues, like Taiwan, the South China Sea and economic sanctions on North Korea and Iran.

“Across the globe the United States and China are jockeying to build alliances or partnerships and shut out the other power.”

That China plays such games is not a good reason for the Trump administration to do so. The Chinese want to sell to us, not annihilate us, but for the ignoramus Trump, that amounts to war by other means. However, China’s moves are easily seen as responses to Trump’s aggressive measures in its neighborhood. For every pro-detente member of the administration, there seemingly are two members who think war with China is inevitable. For Trump, trade has nothing to do with individual freedom and prosperity. It’s just part of the arsenal with which to wage war against perceived rivals and reward friends. A charge of “unfair trade practices” is one of the first refuges of scoundrels.

Viewed as a whole, Trump’s foreign policy is nothing but inimical to individual liberty, peace, long-term prosperity, and the right of Americans and others to pursue their private lives beyond the reach of meddlesome rulers. As the Jeffersonian Abraham Bishop said in 1800: “A nation that makes greatness its polestar can never be free.”