The Absurdity of Trump’s Syria Strikes

The Absurdity of Trump’s Syria Strikes 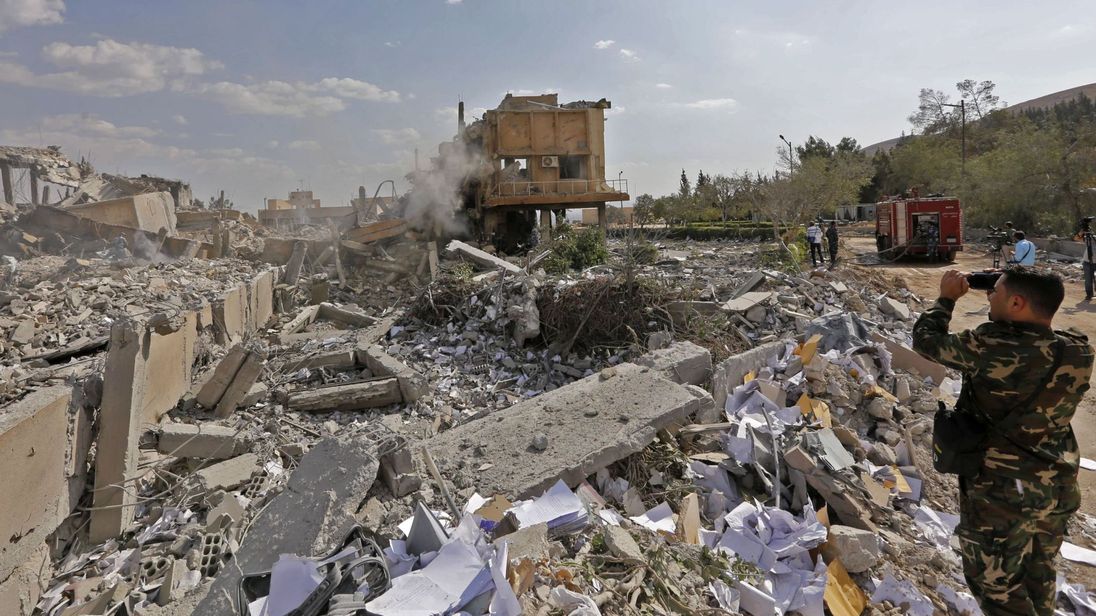 Last Friday night, President Trump launched cruise missiles against government facilities in Syria. His partners in the strike were France and the UK, leading to an appealing acronym for this trilateral band: the FUKUS coalition.*

By all accounts, the strikes don’t appear to have done much–aside from violating international law, violating the US Constitution, and escalating geopolitical tensions between the US and Russia to their worst point in years. The US said the strikes targeted two alleged chemical weapons storage facilities and a scientific research facility. Although the buildings in question appear to have been destroyed, initial reports indicated there were no deaths caused by the strikes, civilian or military.

According to the US Chairman of Joint Chiefs of Staff General Dunford, these targets were chosen to “mitigate the risk of Russian forces involved.” France, for its part, said that it warned Russia in advance of the attacks to avoid any further escalation of the Syrian conflict. UK Foreign Secretary Boris Johnson added in an interview that the strikes were strictly about saying “no to the use of barbaric chemical weapons,” while noting that they would not “turn the tide” of the conflict and were not aimed at regime change.

The picture that emerges from these facts is that the Western governments desperately wanted to “do something” in Syria, while simultaneously limiting the chance of a spiralling escalation with Russia. The latter is an admirable goal, but it’s also bizarre in the context. The position of the interventionist coalition amounts to this: “We wanted to bomb Russia’s ally, but we didn’t want things to escalate with Russia.” These are not especially compatible goals.

Officially, the purpose of the Syrian strikes was to stop Syrian President Assad from using chemical weapons. This goal takes for granted that Assad definitely used chemical weapons in Douma early last week.

There are good reasons to question this premise, but for the sake of argument, let’s assume the interventionists’ premise is correct.

If the goal is deterrence, the next thing we’d need to understand is Assad’s motivation to use chemical weapons in the first place. For President Trump, this question is easily solved with the classic Evil Madman archetype. In a tweet, Trump characterized Assad as “a Gas Killing Animal who kills his own people and enjoys it!”

This would imply the use of chemical weapons wasn’t the product of rational calculation at all–Assad just murders people because he likes it. In this version of reality, the only way to stop future chemical weapons attacks would be regime change or obliterating all chemical weapons, production facilities, and delivery mechanisms. The strikes ordered Friday did not attempt this. If the Evil Madman model was correct, then he’d be able to resume his gas killing ways next week. The Friday strikes would have brought US-Russia relations to a boil without any possible benefit; all risk, no reward.

Of course, not everyone thinks foreign policy motivations are that cartoonish. The French offered a more nuanced understanding of why Assad would order the alleged chemical attacks. In France’s declassified intelligence report on the incident, which was helpfully published after the airstrikes had already been delivered, they described Assad’s rationale as follows:

…the Syrian regime’s use of chemical weapons makes sense from both the military and strategic points of view:

Tactically speaking, this type of ammunition is used to flush out enemy fighters sheltering in homes and engage in urban combat in conditions that are more favorable to the regime. It accelerates victory and has a multiplier effect that helps speed up the capitulation of the last bastion of armed groups.

Strategically speaking, chemical weapons and particularly chlorine, documented in Eastern Ghouta since early 2018, are especially used to punish civilian populations present in zones held by fighters opposed to the Syrian regime and to create a climate of terror and panic that encourages them to surrender.

This is certainly a more plausible explanation than Trump provided, but it still has some problems. Most notably, it accounts for the possible military benefits of using chemical weapons, but it gives no consideration of the cost–namely the chance that the US and other Western powers would intervene militarily in response to chemical weapons being used.

This is a severe omission. It’s the single most important strategic reason for Assad not to use chemical weapons.

The US and its allies have been involved in a covert operation to overthrow or weaken Assad since 2012, but the only time they have actively considered direct military intervention against Assad was when they accused him of using chemical weapons. In the high-profile 2013 incident, this resulted in Syria signing on to the Convention for the Prohibition of Chemical Weapons and destroying its declared chemical weapons stockpiles. Then last year, in the case of the Khan Sheikhoun incident, the US responded with a “drive-by Tomahawking” that targeted Syrian airfields with cruise missiles, destroying several Syrian jets in the process.

So the question for Assad was whether the military benefits of using chemical weapons would be worth the risk of having the most powerful military in the world retaliate against his government again. And of couse, he’d have no way of knowing the extent and form that retaliation would take in advance. Maybe it would be nothing; maybe it would be an isolated round of airstrikes; or maybe it would be a full-on Libya-style intervention.

If Assad used chemical weapons anyway, this would suggest he and his generals value their military benefits very highly. They knew they were risking, at least, another spate of cruise missiles from the West and proceeded regardless. For the French version to be correct, this had to be Assad’s calculation.

So how would the new airstrikes change his calculation? Last year’s 58 cruise missiles didn’t deter him, but this year, 105 missiles definitely will? Who calculated the break-even on that?

This does not make any sense. Either Assad had previously determined that the military benefits of chemical weapons weren’t worth the risk of US intervention–and he didn’t carry out this attack–or he thinks chemical weapons are important to the military effort and used them anyway. In either case, it seems implausible that the recent airstrikes will materially change that calculation. The status quo of Syria’s military tactics, whatever they were, will be the same as before.

Again, we find that the interventionists were willing to risk a confrontation between nuclear superpowers to carry out a mission that stood no chance to achieve their stated goals.

All of this draws us to an unattractive conclusion.

Even if we abstract away from legality and assume the questionable premises of the interventionist coalition, the Syria strikes cannot be justified. If Assad is simply a madman, the strikes wouldn’t stop him. If he’s a calculating strategist, they are unlikely to alter his calculations.

The case for the Syria strikes fails on its own terms. The interventionists rushed to “do something” anyway, risking a catastrophic escalation for no conceivable benefit.

*Hat tip to the Moon of Alabama blog for the well-ordered coalition acronym.