The Afghanistan Withdrawal, One Year Later

The Afghanistan Withdrawal, One Year Later 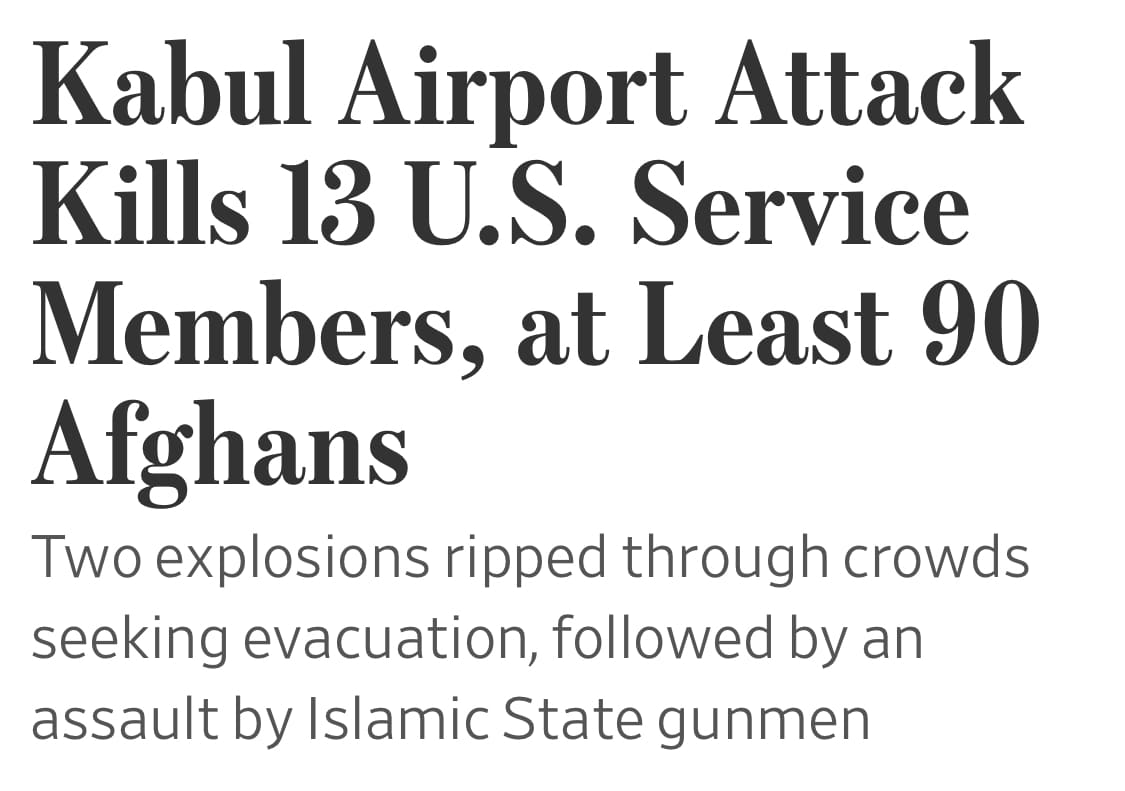 This is a mournful anniversary.
One year ago, on August 26, thirteen U.S. soldiers were killed by ISIS-affiliated suicide bombing at the Hamid Karzai airport in Kabul during the evacuation. They were the last Americans to die in Afghanistan.
Poor planning by the Pentagon contributed to their deaths, along with the Biden administration’s decision to extend Donald Trump’s withdrawal date from April 1 to September 1.
They didn’t need to die, and there ought to be accountability.
But likewise, none of the 2,400 soldiers needed to die in the twenty years of war that preceded the attack.
But I don’t hear nearly as much outrage over those soldier’s unnecessary sacrifices.
Instead I see a lot of politicians and corporate journalists waving a bloody flag, saying the Karzai airport attack is proof we should have never left Afghanistan.
They couldn’t be more wrong.
Just look at what’s happening in Syria. Last week three U.S. soldiers were wounded in Syria from rocket attacks launched by militants accused of being associated with Iran.
Our military responded with Apache attack helicopters, AC-130 gunships, and M777 artillery, escalating the danger our soldiers are in.
The same thing would still be happening in Afghanistan if we were still there: our soldiers fighting and dying in a pointless war.
The airport attack didn’t suddenly create a strategy for victory in Afghanistan.
The airport attack didn’t suddenly make nation-building a success.
The airport attack didn’t suddenly give us a better reasoning for staying than the two decades of battles and attacks that preceded it.
The airport attack didn’t suddenly make Afghanistan a noble war.
It was the correct decision to bring our troops home.
It was correct morally, constitutionally, and strategically.
So when you hear War Party lackeys crying crocodile tears for our fallen soldiers, ask them why they don’t care about the lives of our soldiers still fighting for their lives in these endless wars.
I’m writing as a veteran who wants to fix our broken foreign policy.
I want to bring our 1,000 troops home from Syria.
I want to bring our 2,500 troops home from Iraq.
I want to bring all uniformed military advisors and intelligence personnel home from Ukraine.
I want to bring our hundreds of troops home from Yemen, and Somalia, and elsewhere.
If you agree with this mission, contact your local legislators about sponsoring Defend the Guard, which would prohibit the deployment of our National Guardsmen into active combat without a declaration of war by Congress.
We can starve the military-industrial complex of resources and force the government to restore the U.S. Constitution and end our endless wars.
Let’s bring our troops home safe, before it’s too late.