The Establishment Feels the Bern

The Establishment Feels the Bern 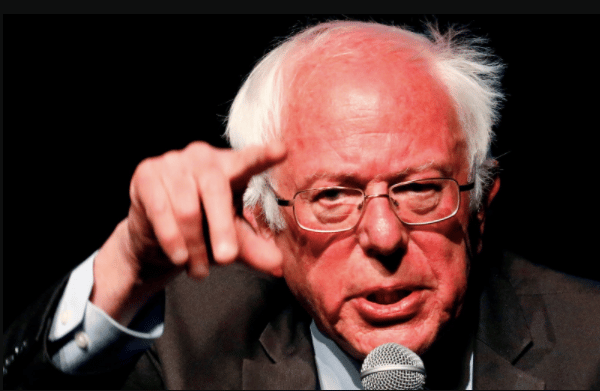 With the rise of Bernie Sanders in the polls, the establishment is worried. The prospect of a two-way race between Trump and Sanders in the general election has the powers-that-be out in full force.

The problem is that they don’t want to make it look too obvious with their opposition to Bernie. Many people, particularly Bernie supporters, already feel that the DNC rigged the primaries against Bernie in 2016.

Hillary Clinton obviously sought to take the nomination in 2016 (and would take it in 2020 if given the chance) because her goal is political power. But the issue is a little more complex regarding why the establishment fears a Bernie presidency.

Bernie is disliked by the establishment for similar reasons as Trump. They both sometimes tell the truth, particularly in regards to U.S. foreign policy.

There is a difference between the average person on the street who is a Trump hater and those within the power network of Washington DC. Someone may hate Trump because of his brashness, his rude Tweets, and his overall arrogant demeanor.

This does not get to the core hatred from the establishment. They don’t like Trump mostly because of his inconsistent views on foreign policy. They want someone consistent, but not consistent in the views of someone like Ron Paul. They want someone who will uphold the aims of the U.S. empire and military-industrial complex.

Trump sometimes tells the truth. He sometimes makes gestures towards peace, at least rhetorically. But even when he is siding with the regime, his truth telling can still be damaging.

For instance, he said that U.S. troops would stay in Syria to control the oil. This is no different from previous administrations, but Trump bluntly told the truth, which the establishment doesn’t like because it can de-legitimize U.S. foreign interventions.

And this may be the greatest thing Trump has done on behalf of liberty. His policies have been mostly horrible (continuing the tradition), but he is helping to de-legitimize the U.S. empire. Sometimes it is inadvertent, but we should take what we can get.

Of course, Trump has had some good things to say on foreign policy, particularly when he was campaigning. He said that we were lied into war in Iraq. He said he wanted to get along with Russia. This most likely explains why the establishment doesn’t like him. They are afraid that he may follow through on some of his rhetoric and that it will be persuasive to the American public.

The establishment doesn’t hate Bernie because he has described himself as a socialist. I doubt that Wall Street is even that worried. If stocks begin falling prior to the election, Trump will try to blame it on the prospect of a Bernie Sanders presidency. But if stocks do fall, it will be because we are in a massive bubble (which Trump described in 2016 before the bubble got bigger).

Bernie’s domestic policies do seem scary, but they are likely no bigger a threat than any of the other presidential contenders. We already have a disastrous healthcare system. It’s possible Bernie could get his universal healthcare system (i.e., government healthcare), but that is still somewhat of a long shot.

In terms of spending, it really can’t get any worse than it already is. We have one trillion dollar deficits, and this is during a supposedly prosperous period. If anything, the Republicans in Congress may actually start caring about federal spending again if Bernie is in the White House.

The reason the establishment is against Bernie is mainly due to foreign policy. They are afraid he might disrupt the military-industrial complex.

I don’t have a great degree of confidence that a Bernie presidency will lead to a significant change in U.S. foreign policy, but it’s certainly more likely than with a Biden or Buttigieg presidency. But we shouldn’t be fooled.

Bernie is rather weak. After having the DNC snatch the nomination from him in 2016, he endorsed the bloodthirsty Hillary Clinton, who never met a war she didn’t like. That alone should tell you how strong Bernie will be in office.

It is also important to consider that Bernie puts little emphasis on foreign policy. He tends to be good on the issue (relatively speaking) when asked, but he is more obsessed about taxing the top 1% than he is about stopping the bombing of innocent people in foreign countries.

Even though we don’t know for sure how a Sanders presidency would turn out, it is certain that the establishment media and the rest of the cesspool in Washington DC are trying to prevent his nomination because of the uncertainty. He may actually follow through with some of the things he says, and they can’t take that risk.

If Bernie actually gets the nomination, I think the establishment may quietly side with Trump. They would rather the devil (from their perspective) they know. Trump has been in office for over 3 years, and while he has done some damage rhetorically to the establishment, foreign policy has not changed much up to this point. The wars go on.

With Bernie, there is more uncertainty. Therefore, the military-industrial complex and the rest of the establishment may prefer Trump over Sanders. It would not be surprising if they put someone up like Michael Bloomberg to run as an independent in the general election in order to take votes away from Sanders. It would split the anti-Trump votes.

It will largely depend on how Bernie acts if he gets the nomination. I think he will moderate his views in the general election. He won’t call himself a socialist when he is up on stage debating Trump. He will come across as more reasonable, at least on domestic issues.

The big question will be his views on foreign policy. The establishment will try to get close to him in order to control him. If Bernie starts hiring foreign policy advisers who have been pro war in the past, then they will feel reasonably comfortable that they can control him.

It will be a different story if Bernie keeps speaking against U.S. wars and interventions. If he suggests having someone like Tulsi Gabbard as Secretary of State, then the establishment will really flip out. They will prefer Trump at that point. You will see the establishment media change its tune on Trump. They won’t be outright nice to him, but they will quietly change the narrative to make Bernie look like more of a crazy person.

The good news in all of this is that we have reached a point where the deep state is not in full control. We could have a general election with two candidates who are not approved by the establishment. Regardless of how bad they may govern, this is still a positive sign for liberty.

Geoffrey Pike blogs at Libertarian Investments. He is the author of Free Market Economics Made Easy.