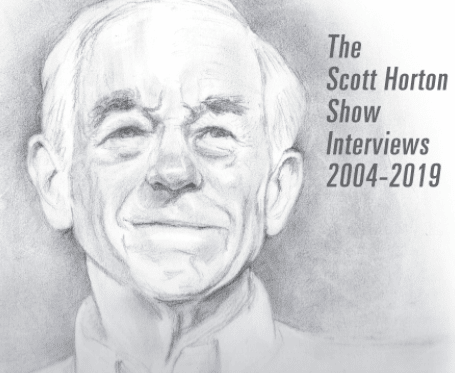 Looking for a last-minute stocking stuffer for a liberty-minded friend or relative? Or are you already thinking of how you’re going to spend that Amazon gift card you get every year from friends and family who know your second favorite thing to do (after helping C4L put the heat on anti-liberty politicians) is reading books on liberty?

Then check out The Great Ron Paul, new from our friends at the Libertarian Institute. The title alone should be enough to make you want to buy it, but I’ll give you some details about the book anyway.

The book is a transcript of every interview Scott Horton, editorial director of Antiwar.com and longtime libertarian antiwar radio host, conducted with Dr. Paul from 2004 through this year.

It is not surprising that the interviews focus largely on foreign policy. But it is also not surprising, given that Dr. Paul does not believe there is some magic wall dividing foreign policy, economic policy, and civil liberties (especially in the era of the PATRIOT Act and TSA), that the interviews also discuss the Federal Reserve, the post 9-11 rise of the surveillance state, and how Dr. Paul’s 2008 Presidential campaign started a liberty rEVOLution.

The book gives you the opportunity to see Dr. Paul’s perspective on the major events of the past 15 years in “real time” and is thus a living history of a fascinating time in American (and world) politics, seen through the eyes of the leading spokesperson for liberty of our times. The fact that  Scott not only agrees with Dr. Paul but is also himself knowledgeable about Austrian economics and libertarian political philosophy, means that Dr. Paul does not have to spend time explaining his philosophy or defending his views from distortions and attacks. Instead, these interviews give Dr. Paul the opportunity to focus on giving a libertarian perspective on the major events of the time.

The Great Ron Paul is a perfect gift for lovers of liberty, amateur or professional historians, and high school or college students interested in learning about the history and politics of the past fifteen years. You  can buy the book (and help Campaign for Liberty) here.

Reprinted from Campaign For Liberty.