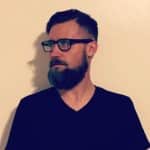 William Van Wagenen has a BA in German literature From Brigham Young University and an MA in Theological Studies from Harvard Divinity School. You can read his other writings on Syria for the Libertarian Institute here. Follow him on Twitter @wvanwagenen.