The Party and the Deep State

The Party and the Deep State 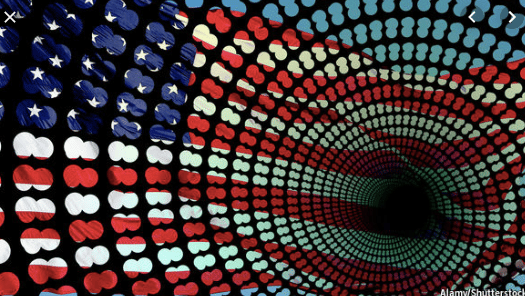 If we compare our current situation politically and culturally in this country, to the many films Hollywood produces that depict a dystopian authoritarian society, we would be relived to feel we are far from such a reality. Much has been said about a “deep state” that exists within our own United States government. A system of shadow covert decision makers with power that influence decisions which impact us daily. As the father of public relations once wrote in the first paragraph of his well-known book titled “Propaganda”, “Those who manipulate this unseen mechanism of society constitute an invisible government which is the true ruling power of our country.”

From the perspective of an average citizen, our country is far from what is depicted in film. However, if we see it from the perspective of those who wield actual power, it’s advantageous for them to never get to the level seen in Hollywood films. In fact, films portraying horrible dystopian societies act as a sub conscious anchor, that permanently reinforce our current situation as bearable, relative to the movies, all the while our civil liberties and “democracy” diminish each year. Regardless of what you may feel towards President Trump, if you respect the democratic system of the United States, it is very difficult to argue that there is not a deep state attempt to unseat this duly elected President. But before we delve into that, let’s first analyze the people who attack the President day after day.

Criticizing a President is not a new phenomenon, and this President certainly warrants criticism, notably his support for the Saudi led slaughter of Yemeni civilians. However, it’s perhaps his best qualities that are repeatedly scrutinized by the same people who just years ago would have agreed with him. The effects of mainstream media can be seen greatly, as every single day since before he was inaugurated, the media has attacked his Presidency. After much time and repetition, it seems as though people don’t understand why they even dislike the President. Instead, they’ve been programmed to believe any and all actions he takes are evil. The first of these actions being his insistence on puling U.S troops out of the Middle East.

Trump’s firing of war hawk National Security Advisor John Bolton was one of his best decisions. Eliminating a cabinet voice that insists on war and conflict should be great news. But not for everyone. The Democratic Party, which once belonged to the likes of President Kennedy, is a shell of itself. What happened to the Party that had a disdain for covert and secret organizations like the CIA, which Kennedy famously, and maybe fatally, dared to question? Or the party of Democratic President Harry Truman, who said once “those fellows in the CIA don’t just report on wars and the like, they go out and make their own, and there’s nobody to keep track of what they’re up to”. Has the media convinced the once anti-war left that unelected covert organizations are the pinnacle of democracy? Looking at today’s affairs it seems so.

As I write this, President Trump has agreed to pullback troops from Syria, and the uproar is deafening. One would think the Democrats who braved a strong nationalist force post 9/11 to publicly protest the Iraq War, would cheer troop withdrawals from a region that has seen upwards of $8 trillion spent of taxpayer money. Yet instead, left leaning media insists on welcoming members of the “intelligence community” to throw softball questions onto as they pitch the public the necessity for ongoing war. I’m old enough to remember when Democrats once challenged the advice of our unelected “intelligence community” as they pushed us into nearly two-decade long wars based on now proven lies. Yet today’s Democrats are the quickest to attack a President for merely suggesting that this community might have ulterior motives and can be wrong.

Between the Russian collusion story, a Ukrainian phone call, and a litany of other obstacles thrown at the President, it is clear there are powerful people who want the President out because he does not follow their agenda. Remarkably, the average citizens might actually believe the reasons given by powerful elites for their dislike or challenging of President Trump. Former CIA Director John Brennan, a well-known critic of the President, often calls for his removal. Even Republican Senator Lindsey Graham will challenge the President as soon as there is a hint of deescalating conflict anywhere in the world. Today the Senator suggested a troop withdrawal from Syria would be disastrous for our friends, the Kurds. It’s actually quite mind boggling to think people believe Lindsey Graham genuinely cares about the Kurds. Or that John Brennan is concerned about Trump’s integrity. Nobody seemed to care about the Kurds when the U.S and these same actors in government and the intelligence community, were supplying Iraq with chemical weapons to kill them. Has nobody questioned whether perhaps war hawks want troops to remain not because of any Kurdish empathy, but because their defense stock profits might take a hit from peace? Yet it seems today’s Democratic Party has been convinced that their passions and goals are aligned with the same people they once knew were self-seeking liars.

We live in a complex time where the old Democratic Party is looking more like the Bush era Republicans, and today’s Republican Party led by Trump, looks like yesterday’s anti-war Democrats. War hawks remain embedded in both, but for the most part something has changed. And that is that President Trump has directly or indirectly exposed a deep state that exists with its own goals independent of democratic led civilian aspirations.