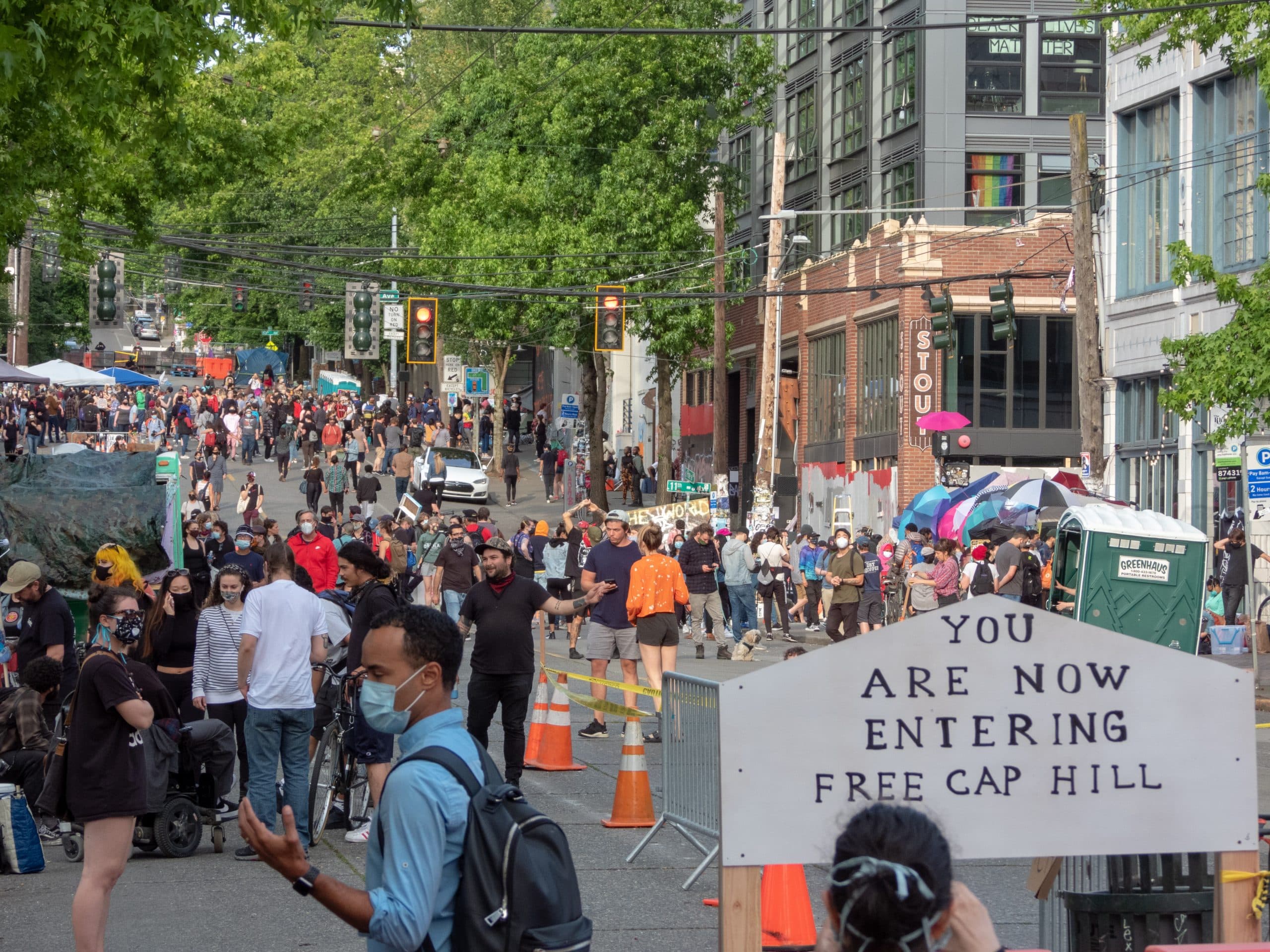 In a recent Mises Wire article, Jeff Deist commented on the squatting of Capitol Hill in Seattle. Contrasting Hans-Hermann Hoppe’s and Walter Block’s respective libertarian approaches to public property, Deist asked if the residents of the ‘CHAZ’ (Capitol Hill Autonomous Zone) are illegal squatters or homesteaders, and concluded that it is a “thorny question.”

Walter Block then responded in a rejoinder on the Power & Market blog elaborating on his view that public property is open for homesteading because, while stolen, it is, in effect, unowned.

The problem here is that both arguments introduce ambiguity and, in fact, shy away from the core issue: private property rights and, specifically, what is owed when something was stolen. Let’s first summarize the arguments.

Hoppe’s argument is summarized by Deist as “the streets of Seattle are not virgin territory available to homesteaders, but rather akin to land held in trust by (admittedly unworthy) state agents on behalf of taxpayers.” This is the same argument as Hoppe has famously used in defense of government-imposed restrictions on immigration since it ‘subsidizes’ foreign nationals by allowing them to take advantage of the stolen property in the form of public roads, welfare system, etc. (The same restriction does not seem to apply to out-migration by those who are net beneficiaries of the state.)

Block’s argument is instead based on the question of whether (non-criminal) homesteaders of public facilities would be legitimate owners. States Block: “It is difficult to see why not. After all, according to strict Rothbardianism, these amenities are not—cannot be—legitimately owned by a coercive government. If this is so, then they are unowned and therefore available for the taking by the next homesteader to come down the pike.”

There are problems in both cases, of course. I have previously addressed some of Hoppe’s argument as it applies to immigration, but will here focus on the problematic assumption that what is stolen from taxpayers is specific property and/or that what the perpetrator owes is specific. The perpetrator here, of course, is the state, and abstractions or aggregates do not have rights—only individuals do.

The real issue here is not how one can (or want to) conceive of the state with respect to a citizenry. As both Hoppe and Block would agree (I think), the state is not simply about theft. States inflict immense harm on people, their liberty, and their property. It is insufficient to consider the state only in terms of the property it has acquired (by rights violation). Its actual guilt, and thus the rightful claim by its victims, is the total scope of the abuses and rights violations it has perpetrated. And the real guilt lies, of course, with the acting individuals who instead of acting as individuals perpetrated these acts while hiding behind their titles, positions, badges, uniforms, and the pretend-authority the state provides them with.

Now, libertarians already have an answer to how rights violations must be dealt with. The answer is that the perpetrator must make the victim whole again. To the extent specific property has been stolen, this property must be returned (along with damages and cost for enforcing the return). But if the loss is not of a specific (and unspoiled) item, libertarian principles demand restitution in the form of the value lost (or some reasonable estimation thereof, e.g. its market price). This is simple enough.

The “thorny issue” is who is the rightful owner of the streets, national parks, government buildings, etc. that are part of the “public property.”

Making the rightful owner whole is different for fungible property (such as money). Certainly, taxpayers have a right to get ‘their money’ back in the same sense as a property owner has the right to receive their property back. But just like one can pay one’s debt in full using completely different bills and coins than those that one borrowed, taxpayers are not reasonably owed the exact bills and coins (if any) they paid to the IRS. It is not the specific monies but the function of it that is lost—not the specific bills and coins. Property is here-in what is represented by the money.

It is similar in the mixed or in-between case of specific property that has been destroyed, spoiled, changed, or transformed. It is the function that is lost that one has a right to get back. If one night Anne steals trees from Ben’s private forest, makes planks and then builds a house—Ben does not have a right to (and probably doesn’t want) the actual matter stolen: the planks made from those trees or that section of the wall that they make up (plus the waste material discarded). No, Ben has a right to be made whole. That is, Anne must get Ben back to where he was before the crime. (Exactly what this means in any specific case is a matter of negotiation, market standards, etc.)

The same goes for public property. A government building was not made from bricks that were stolen from a specific mason; the windows were not stolen from a specific glazier. The building cannot be returned in pieces to the rightful owners to make them whole. And even if they were outright stolen, the nails cannot be taken out of the walls and be returned to thereby make the victim whole again. The same is true for the land on which this building was built. It was likely stolen long ago from (let’s assume) a legitimate owner. This land is in many cases not the same as it was then but has been changed in numerous ways. Perhaps it was farmland but the fertile top soil has been transported elsewhere to make room for the building’s foundation or basement. Returning the land is unlikely to make the previous owner whole. And try to find the topsoil again to return it to the owner of the land where there is now a building. (And even if possible, all of this assumes the actual owner is still alive or that whoever would be the rightful heir or present owner can be traced.)

All of this suggests that the solution is recompense rather than the return of specific property to the victim(s). What makes this a “thorny issue” is that we rely on the (inapplicable) assumption that property stolen by the state should (and can) be returned to make the legitimate owner whole. This is more often than not an impossibility because the specific property in the form it was when stolen no longer exists—it has typically been mixed with other stolen specific property. And in all cases the state has wasted plenty of stolen money (taxes) to support this process, maintain control over the property, and keep others out.

The only reasonable conclusion is that in almost all cases the state is not a ‘steward’ of the specific property it stole, but rather an illegitimate occupier and controller of valuable assets that are well beyond what can be returned to rightful owners. In that sense Block is right: public property, because it is ‘owned’ by the State, is unowned and can therefore be justly homesteaded. Simultaneously, all those victimized by the individuals acting as the State have a right to be fully compensated for the harm inflicted on them.