‘This is the Most Important Election of Our Lifetime!’

‘This is the Most Important Election of Our Lifetime!’ 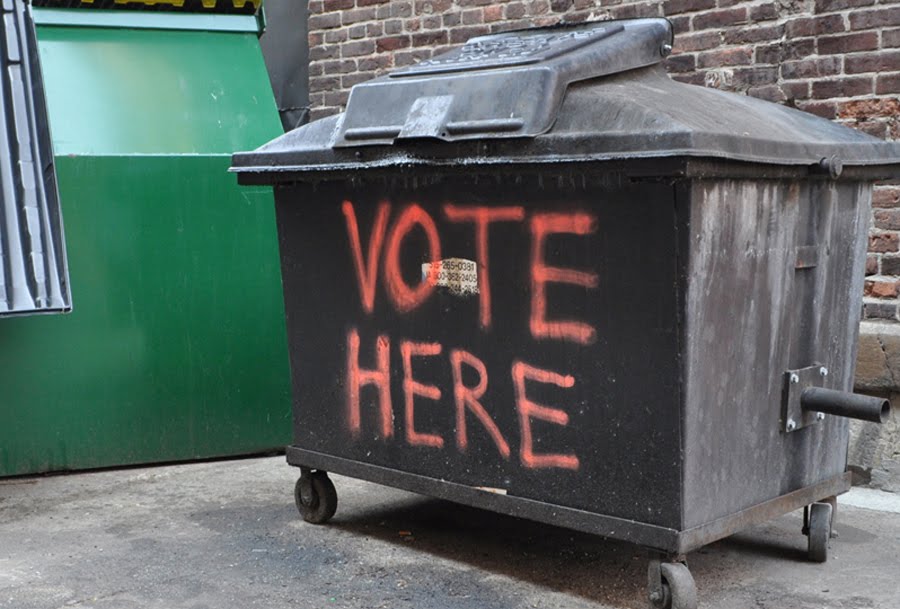 The debates have started and we are well on our way into another election season. Veterans of this hell are preparing their tropes: “This is the most important election of our lifetime,” or, “You have to vote for my guy, the other one wants take your health care.” There’s my favorite: “You can’t vote third party, you’re taking a vote away from X, and Y is literally Hitler!” Then there’s the pinnacle of rhetorical declarations, “If you don’t vote, you have no right to complain.” George Carlin deftly stuck a dagger in that one.

The act of watching the recent Democratic debates is mind-numbing. Twenty people, split up into two nights, the most recent running almost 3 hours. Why? They’re all up there basically saying the same thing with the major exception being that some would allow you to keep your employer-based health care plan. If you’re looking at it as an outsider, one who will never see the inside of a voting booth again, it must make you wonder how the people dead set on voting for a democrat based on any of the aforementioned slogans can look at these candidates and tell a real difference (Yang, Gabbard and Williamson excluded, but have no chance of winning).

In the 2016 Republican primaries, seventeen “would-be heroes” cast their lots. It was easy for even a mildly-amused spectator to see there were a couple people standing out from the rest, one certainly. Yet, with few exceptions, the candidates were warhawks who trumpeted that the “socialism” of the last 7-8 years had to stop, and then proceeded to tell you how their own brand of “central planning” was going to work for you. One promised to “Make America Great Again” and was never asked by his constituency if that meant he thought the country was a “shithole.”.

Donald Trump made claims that no one wanted to hear. He said the economy was a bubble and the unemployment numbers were massaged to make Obama look good. When he took office the bubble expanded, and the “fake” jobs numbers kept going in the right direction, so he decided to own them. Hell, he’s rested his whole presidency on the stock market’s rise to record levels.

Speaking of tropes, some may be thinking, “At least it wasn’t Hillary.” That’s probably one of the better ones since many people believe there was the potential to see the country involved in one or two news wars, one possibly being a hot one with Russia. Not to mention there were leaks that showed she was looking to do an executive order on gun control within the first “100 days.” That makes sense to anyone who remembers 1994. Clinton and the economy? That one seems to be up in the air. Who knows? It would’ve been “business as usual” but people like to imagine. The conversation has been had a few times wondering if a Hillary win would’ve led to the first serious secession talks since the mid-1800s. Texas’ reaction to a Clinton regime was something many wanted to witness. Some have watched the radicalization of the Left over the past three years, especially with the attempted coup using the Russia-gate narrative, and decided the only sane thing that can be done to prevent violence in the streets is for sections of the country to divorce from the others.

Those who championed the Ron Paul runs of 2008 and 2012 have probably asked themselves whether or not there was the chance for a resurgence of his message with a Clinton win. The odds were in their favor. When Trump won, some saw him as a “Ron Paul-type,” there to reduce the size of government, to “drain the swamp.” The swamp creatures are still there, some of the vilest, and Ron Paul’s idea of “improving the economy” is to leave people alone. He’s not a 17th century mercantilist looking to start trade wars with the country’s largest debtor, causing stock market swings of 1,000 points in one day. Ron Paul certainly wouldn’t have ramped up the drone wars and continued the proxy war in Yemen, vetoing a resolution to stop supporting the Saudis in their genocide.

Woods’ Law is in full effect, “No matter who you vote for, you get John McCain.” Horton’s Law works as well, “Politicians can be counted on to keep all their bad promises, and abandon all their good ones.”

Through 15,000 hours of Prussian-style, government education, the populace believes they are free because they are given a choice between two candidates every 4 years. When you mention countries in Europe sometimes have three, four or even more legitimate people to choose from the schooling kicks back in and they look down upon you for even suggesting there may be a country better than the one that “educated” them.

Voting has become every bit a sacrament of the “State religion” as “Confirmation” is in Catholicism. To downplay it in any way is blasphemy and will get slogans thrown at you like, “well, if you don’t like it, then leave.” Yes, they actually invoke excommunication. The people who want you to vote for their candidate are in no way as dangerous as those who just want you to vote, to participate, to give it legitimacy. “JUST VOTE!” That may happen in the future if there’s a “None of the Above” option. Even then, hell may be getting chilly.