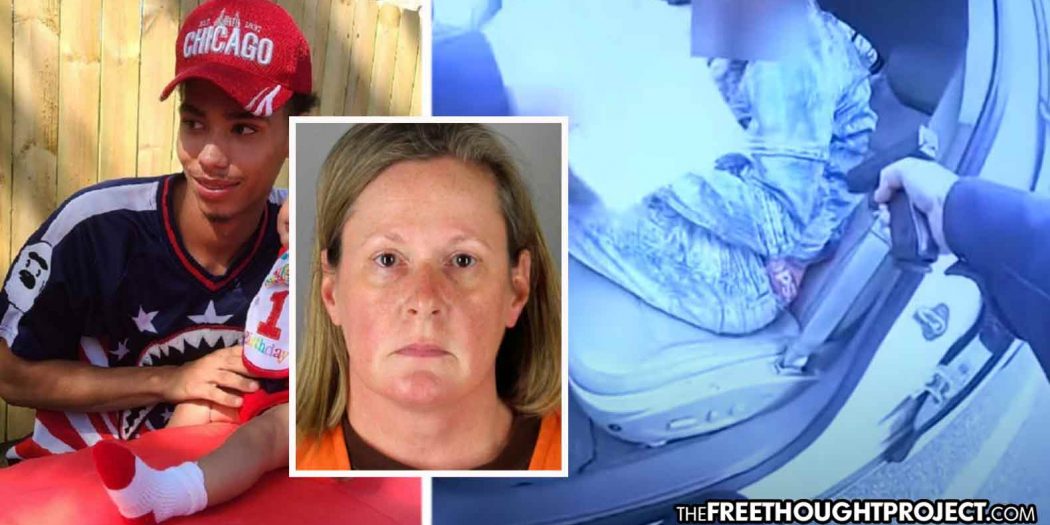 Just miles from where George Floyd took his last breaths on Earth as they were squeezed from his body by officer Derek Chauvin, Daunte Wright was targeted by police over an alleged expired tag. Because the American police state is a violent behemoth which knows no self-restraint, a few moments into the stop and Wright would be killed at the hands of those who claim to protect him. Immediately after killing Wright, the department claimed it was an accident but once video surfaced, all that changed.

The Hennepin County medical examiner concluded in April that Wright “died of a gunshot wound of the chest and manner of death is homicide.” However, police attempted to downplay the homicide by claiming the officer who killed Wright, Kim Potter, thought she grabbed her taser instead of her gun.

Regardless of which weapon she thought she was holding, her actions ended a 20-year-old man’s life. What’s more, according to the video, she had plenty of time—5 seconds—to determine that the gun in her hand was not a taser.

Prosecutors agreed and they charged Potter, who resigned two days after the shooting, with first- and second-degree manslaughter, saying she was an experienced officer who was trained to know better. The most serious charge requires prosecutors to prove recklessness; the lesser only requires them to prove culpable negligence.

Jury selection for Potter’s trial began on Monday and both the defense and prosecution have their work cut out for them. Following Wright’s death, mass protests broke out in the city and affected countless individuals who have all likely solidified their views on this case since it unfolded.

According to Chief Tim Gannon of the Brooklyn Center Police Department where Potter was employed when she killed Wright, officers pulled over Wright on that fateful Sunday afternoon because he had an expired government sticker on his vehicle.

Daunte’s mother, Katie Wright, however, said her son called her during the stop and told her that police pulled him over for an air freshener.

“He said they pulled him over because he had air fresheners hanging from his rearview mirror,” she said.

Katie Wright then listened to her son’s murder on the other end of the phone. She said she heard a scuffle and an officer telling her son not to run and then the call dropped off. When she called his phone back, Wright’s girlfriend, who was in the car with him, told Katie Wright that police just shot her son.

According to police, when they pulled over Wright, after running his information, they realized he had a misdemeanor warrant out for his arrest. When police attempted to arrest Wright over this warrant, Wright tried to sit back down in his car.

As the graphic body camera footage shows, police attempted to pull him out as officer Kim Potter, a 26-year veteran of the department, pulled out her gun and put a bullet in Wright’s chest.

This caused Wright’s car to begin rolling forward as it crashed into another car. Officer Potter then yells out, “f**k, I shot him.”

“It is my belief that the officer had the intention to deploy their Taser but instead shot Mr. Wright with a single bullet,” Chief Gannon said.

As stated above, no matter what she thought, her actions led to the death of an unarmed man who should have never been in police custody to begin with.

According to court records, the warrant was over Wright missing a court appearance. He was arrested for carrying a pistol without a permit—something that is legal in roughly half the country. However, because Minnesota forces citizens to pay the state for a permit to enjoy the right to self-defense, an act which millions do every day legally, it landed Wright in trouble with the law.

What’s more, TFTP conducted a search for the warrant issued and it appears that the notices mailed out to Wright to inform him of the Zoom meeting court appearance, were not making it to him. The last update to his case file is a notice of “returned mail” indicating that he did not receive the notice of a warrant.

Naturally, the NRA was silent over Wright’s death but this should come as no surprise given their selective outrage when it comes to the gun rights of those killed by police.

According to KWCH, Minnesota’s sentencing guidelines call for a sentence of just over seven years on Potter’s first-degree manslaughter count, and four years for second-degree. But prosecutors have said they’ll seek a longer sentence.