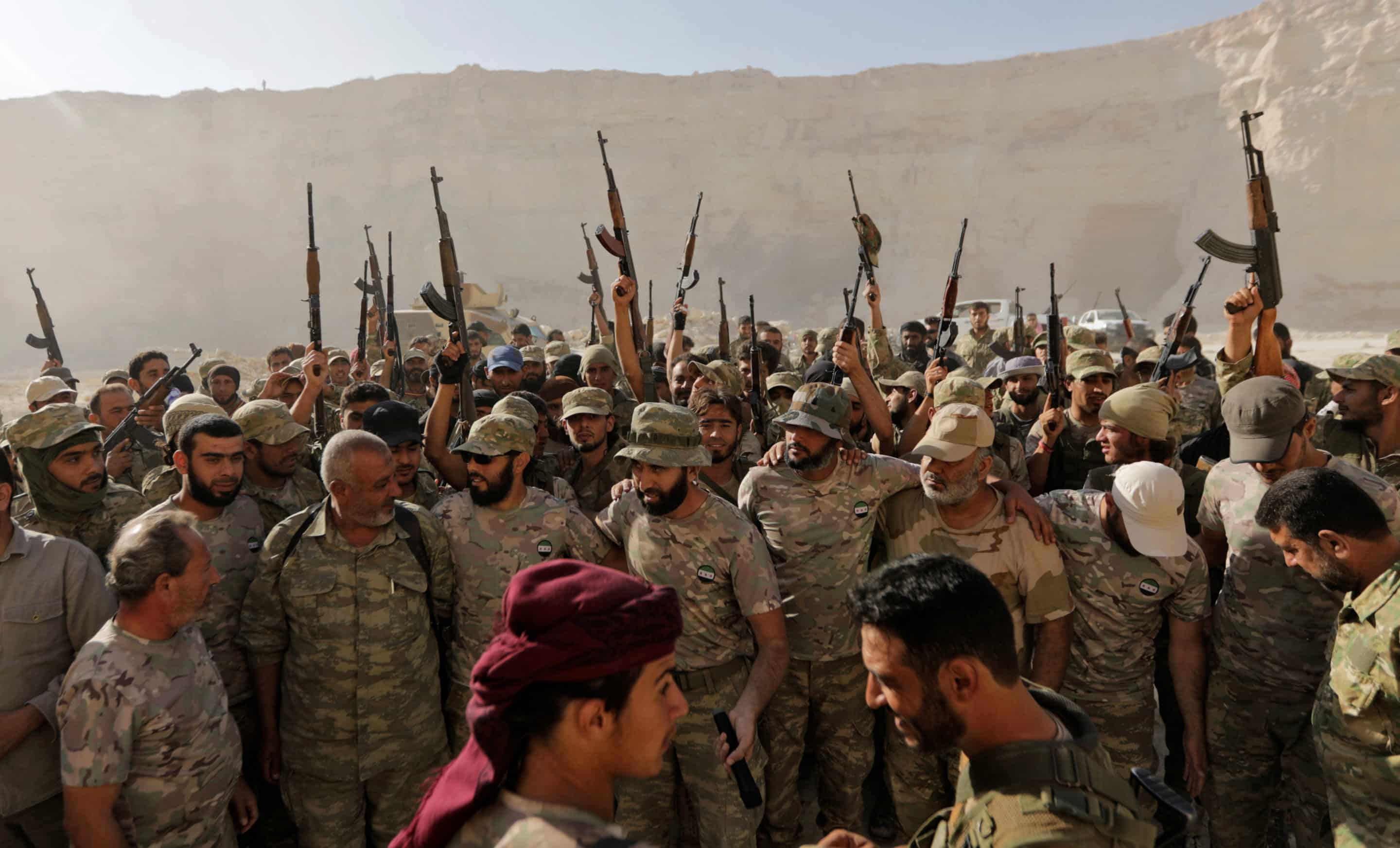 Washington’s former opposition quislings in Syria have been cast in the role of villainous thugs in the corporate press as they take part in Turkey’s cross-border incursion against Kurdish fighters, despite years of fanfare from the Beltway Blob, which hailed the rebels as heroic “moderates.”

Meet the new rebels, same as the old rebels

Initially a crusade to oust President Bashar al-Assad, the American mission in Syria has seen a number of radical revisions over the years, shifting between regime change, defeating the Islamic State, protecting Israel, stopping Iranian arms shipments to Lebanon and now – the pundits say in unison – protecting Kurdish proxies from a Turkish onslaught.

Ankara’s “Operation Peace Spring,” launched October 9 to clear US-backed Kurdish groups from the Syrian-Turkish border, appears to have triggered a partial reshuffling on the battlefield, forcing Washington to vacate Kurdish areas in the northeast which long served as a bastion for US forces and, in some towns, allow the Syrian Arab Army to take its place.

However, Turkey’s army is not executing the mission on the ground, instead outsourcing the job to mercenaries. While rebranded from the Free Syrian Army (FSA) to the Syrian National Army (SNA) in late 2017, the Turkish-backed force now condemned for its brutal assault on the Kurds is the very same “moderate” Sunni Arab opposition supported and armed by the Obama administration earlier in the conflict. Indeed, the SNA fights under the same “revolutionary flag” flown by the FSA when it served at the pleasure of the United States.

The SNA raises a giant Syrian revolutionary flag on the flagpole in the center of Tal Abyad.

The flag hasn't flown in Tal Abyad in at least 5 years, since ISIS captured the city from the Free Syrian Army in 2014.pic.twitter.com/hEOqLQC8R0

To the tune of hundreds of millions of dollars – much of that provided by the Saudis – Obama’s CIA carried out operation “Timber Sycamore,” training up rebel fighters and flooding the battlefield with weapons and gear. Turkey, Jordan, the UAE, Qatar, France and the UK also had a hand in the project, transforming the conflict from an internal civil war to a multinational proxy bonanza.

The CIA mission was conducted despite clear signs that the Syrian opposition was lacking in democracy-loving moderates, and lousy with radicals and head-chopping war criminals. A 2012 memo produced by the Defense Intelligence Agency (DIA) sternly warned that a “Salafist principality” – a term synonymous with “Islamic state” – could emerge from the jihadist-dominated opposition in Eastern Syria. Astonishingly, the document deemed that a desirable outcome in terms of the Obama administration’s policy goals, as it might help to “isolate” the Syrian government.

Here is DIA memo from 2012 predicting / explaining rise of ISIS.. Who was our Sec of State at that time?… #Clinton pic.twitter.com/4dA4xZbIKv

The United States watched as the rebels plunged deeper into insurgency, stoking a conflict in which hundreds of thousands of civilians and combatants were killed on all sides, yet the weapons kept flowing. The most radical factions – including the DIA’s “Salafist Principality,” the Islamic State – were soon awash in American arms, too, as FSA units defected and joined their ranks, or sold their weapons on the black market.

Writing on the wall

Though some analysts in the DIA, not to mention in the alternative media, could see that extremist elements dominated the Syrian opposition from early in the conflict, with the benefit of hindsight that fact is even clearer now to anyone who cares to look.

In the spring of 2013, a video surfaced online underscoring the “moderate” essence of the US-backed opposition. In the clip, rebel commander Abu Sakkar, then with a FSA break-off faction, the al-Farouq Brigades, is seen consuming the heart of a dead Syrian soldier. He then calls on his cohorts to follow his example to strike fear into the apostate Alawites. Farouq, like many of the FSA’s subgroupings, later merged with even more radical factions, and for a time fought alongside the Syrian al-Qaeda affiliate, Hayat Tahrir al-Sham (formerly Jabhat al-Nusra).

The FSA-linked Nour ad-Din al-Zenki Movement also received weapons in the US train-and-equip program, including TOW missiles. The aid stopped in 2016, however, after a video appeared online showing members gleefully decapitating a young boy they claimed was a pro-government militia fighter. One year later, Zenki would also join forces with the al-Qaeda affiliate.

In 2013, the late Senator John McCain traveled to Syria to meet with the Northern Storm Brigade, an FSA unit implicated in smuggling and kidnappings. In a well-circulated photo taken after the meeting, McCain is seen chumming it up with the militants, including accused kidnappers Abu Youseff and Muhammad Nour. While the men in the photo are often misidentified online as members of ISIS, McCain’s friends in Northern Storm may have provided the infamous terror group the location of American journalist Steven Sotloff, who was kidnapped and later beheaded for an ISIS propaganda video.

In the center of photo: Mohammad Nour, a spokesman for the Northern Storm Brigade (of the Al-Nosra Front, that is to say, al-Qaeda in Syria), kidnapped and held 11 Lebanese Shiite pilgrims in Azaz. McCain claimed he didn't know the guy.https://t.co/c5w7C154mJ pic.twitter.com/sRqcVsdxNN

The most recent evidence, perhaps, came in late October, after terrorist militia commander and so-called “Caliph” of the Islamic State Abu Bakr al-Baghdadi detonated a suicide vest as US forces assaulted his hideout in the Idlib province, killing himself and two of his own children. Amid the celebrations and “we got him”s, however, one man had quite a different reaction. Mourning the loss, a senior commander in what’s left of the FSA, Mustafa al-Sejari, took to Twitter to announce “Death to America and Life to Baghdadi, Commander of the Faithful,” who, he said, “died a great hero and a brave man.” The “moderate” Sejari met with US officials in Washington last year as part of a rebel delegation.

This man is “a senior official in Syria's mainstream rebel group” and has met with US members of Congress in DC to lobby them against the Syrian government. https://t.co/QsvnC9lnXM

As America’s previous clients advance on its more recent ones, it’s unlikely many in the establishment will come to terms with the pro-opposition agenda they once supported with such gusto, even as they predict genocide for the Kurds at the hands of their formerly favorite moderate jihadists. By ignoring the legacy of the failed effort to arm and train the FSA, refusing to consider the rivers of blood and piles of bodies created by their preferred policies, the pundits and pols have again learned nothing, sure to replicate the same disastrous blunders again.

The War Party is scrambling to keep the game going, clinging to oil fields in Syria’s north and a base in the south, but the US occupation project is suffering convulsions and the conflict is entering an increasingly post-Washington phase. The Syrian government has reclaimed long-lost territory in the northeast with the aid of Moscow, and faces only one remaining pocket of insurgents in Idlib. It is only a matter of time before they, too, are defeated.

While it remains to be seen whether a Russian-brokered agreement with Turkey will resolve the spat over the Kurdish border areas and halt the much-decried Turkish offensive, it becomes clearer by the day that the United States cannot remain in Syria forever, and now simply has no productive role to play there. It never did.