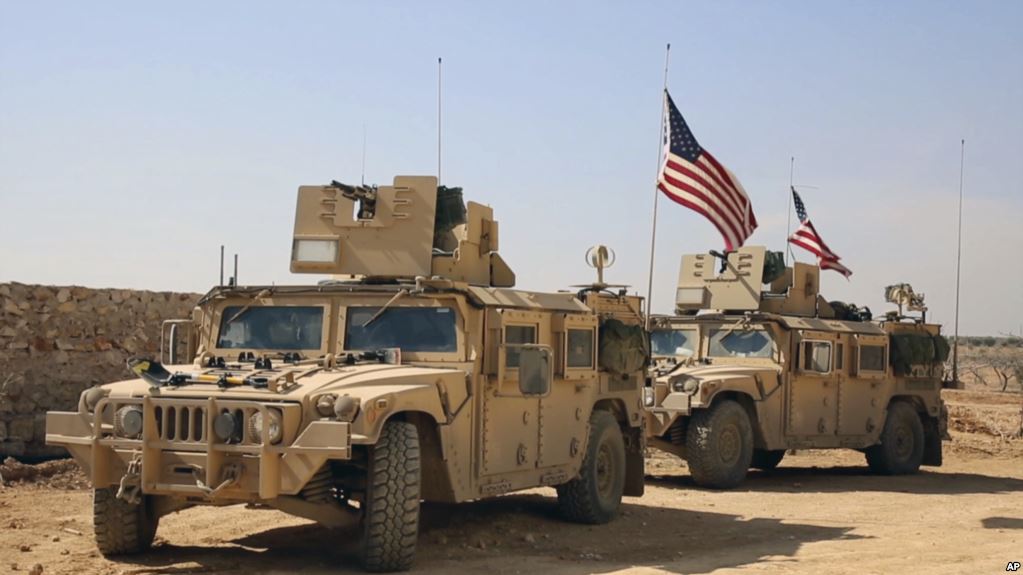 Days ago US soldiers in Syria were been fired upon, and fired back against, Syria’s Islamist rebels:

“US troops in northern Syria came under direct attack last week by Turkish-backed rebels, a military official with the coalition fighting ISIS told CNN Tuesday. The official said that while US troops returned firethere were no casualties on either side.

The coalition believes the attackers are part of the Turkish-backed opposition forces, a loose grouping of Arab and Turkmen fighters that have helped the Turkish military clear ISIS from the Turkish-Syria border area.

The recent clash comes weeks after attacks against US troops in the area were first reported and confirmed by coalition spokesman Col. Ryan Dillon. Following those attacks, Dillon said US and coalition troops “reserve the right to defend ourselves.””

These would be the same Islamist, and largely salafist, rebels who were armed by the Saudis and the CIA against the Syrian government.

Meanwhile, some 300 kilometers to the south the Syrian army, Hezbollah and the Lebanese army in a joint operation defeated a large ISIS enclave on the Syrian-Lebanese border.

Beirut tried to maintain the fiction that its army and Hezbollah were not coordinating but that facade shattered as soon as the offensive got underway and the internet was flooded with images showing the two fighting side by side. (On the other hand, in an earlier offensive against al-Qaeda there really was little cooperation simply because the Lebanese army barely played a part.)

What makes this battlefield alliance particularly interesting is that the Lebanese army is backed by the US. It receives material aid, and the US also confirms there are US troops in Lebanon, at the very least to monitor the aid shipments:

“I can confirm the presence of US Special Forces in Lebanon,” Pentagon spokesperon Eric Pahon told US-funded Arabic television network Al-Hurra earlier this week. “Our special forces are providing training and support to the Lebanese Armed Forces,” he added.

“That not only concentrates on operational type missions, but also tactical and strategic type missions. We also have a presence with Lebanese Special Forces in all aspects of training and special operations.”

According to al-Hurra’s report, the US Special Forces are currently in Lebanon to assist the army in its military operations against IS. But military sources speaking to pan-Arab newspaper Asharq al-Awsatdenied the reports.

“Those US soldiers have been present in Lebanon to monitor the US military aid delivered to the army,” the sources said, claiming that none of them would participate in the upcoming operation against IS.

Does the US backing Hezbollah’s side in Lebanon, and clashing with its former instruments in Syria signal a reversal in US policy? No, it does not. But what it does, is highlight the vast disconnect between the interests of the American empire and the actual security needs of the US.

Does the US have actual legitimate security fears in the Middle East that necessitate its military role there? That in itself is highly debatable, but if it does have intractable ideological enemies it can never sleep peacefully for as long as they exist these are not Iran, Hezbollah and the Syrian government, whom the foreign policy blob is itching to fight.

Instead they are the internationalist salafist jihadis that the US sometimes — when they get too out of control — fights, but even more often helps spread against Empire’s chosen targets of the day.