US Winds Down Its Land Grab in Southern Syria, Launches Another One in the East

US Winds Down Its Land Grab in Southern Syria, Launches Another One in the East 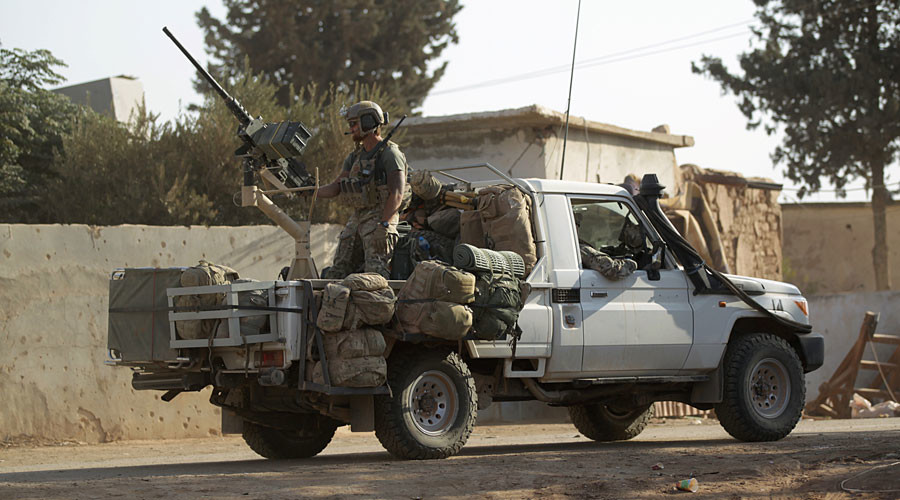 The US has evacuated the smaller of its two bases in southern Syria. Together with Syrian rebels in its employ it has left the Zakaf outpost and actually dynamited it on the way out.

It has also told two rebel outfits in the south, with whom it has previously cut links, to exit Syria and head for Jordan. Martyr Ahmad al-Abdo Brigades, and Usoud al-Sharqiya said they would comply especially as Saudi Arabia and Jordan told them the same thing.

Martyr Ahmad al-Abdo was previously backed by the CIA but Trump ended CIA backing of Syrian rebels this July. Usoud al-Sharqiya was previously bankrolled by the Pentagon but the two parted ways in late July when the group kept using the US-rebel al-Tanf base as a staging point for attacks against the Syrian army courting a Syrian response against it.

That leaves Commandos of the Revolution as the only remaining US-linked group in and around al-Tanf. This is because the outfit declined US suggestions it be moved to Kurdish-held northern Syria and participate in the offensive into the ISIS-held Deir Ezzor province from there.

It seems clear the US investment in its occupation zone in southern Syria is waning. Where just months ago it was threatening and bombing the Syrian army to establish it, it is now downsizing its presence. A wholesale evacuation is not unthinkable eventually.

Naturally, the main credit for this goes to the lightning-fast Syrian army advance of early June when it broke through to the Iraqi border and boxed-in the Americans at al-Tanf and made their positions strategically irrelevant.

It has taken some time but it seems the Americans are finally accepting that they have been outmaneuvered in the south.

Perhaps that is the reason that they are doubling down in the east. Though US commanders previously claimed the US-orchestrated SDF offensive into Deir Ezzor would take place only after the battle for Raqqa was wrapped up, the US-Kurdish forces launched an offensive towards the Euphrates river valley on September 8th with substantial SDF forces still bogged down in the city.

Again, the catalyst for US actions was a faster-than-expected Syrian advance which lifted the siege of Deir Ezzor three days prior. If it was going to preempt Syrian advances the US had to have its proxies on the move pronto, especially seeing the Syrian army was seen hauling bridging equipment and boats as soon as connection to Deir Ezzor city was restored. 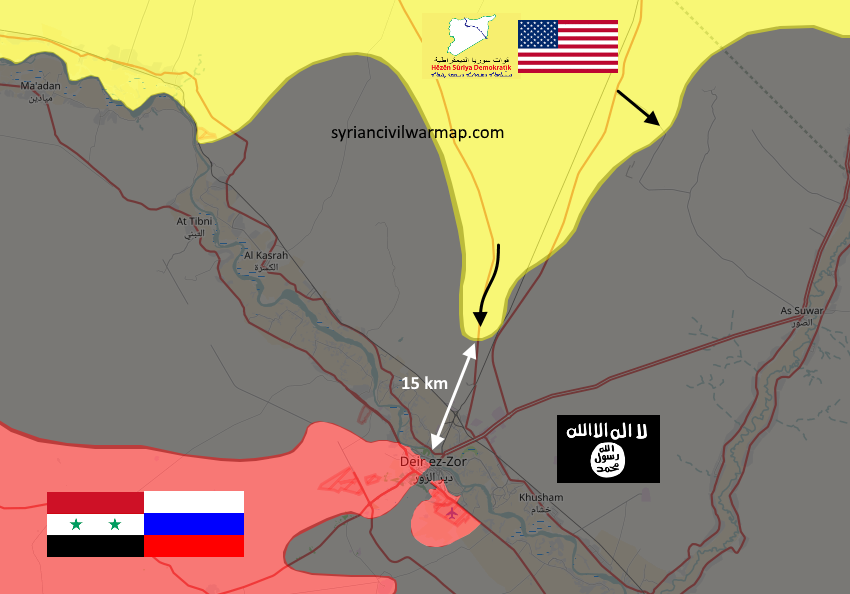 Situation early into the US-SDF offensive

The situation early into the US-SDF offensive

With the Russian-backed Syrian army successfully crossing the Euphrates in one place yesterday, the result of the two offensives is that the US-Kurdish and Syrian-Russian forces are now just a few kilometers from each other. On the one hand, that means they have substantial ISIS forces caught in a near-encirclement. On the other, it means there is again a likelihood of the two coalitions coming to blows.

Indeed, SDF commanders warned the Syrian army from crossing over to the Euphrates left bank, and the US accused Russia of striking the SDF while US troops were nearby. Regardless of the details of these incidents clearly the tensions between the two camps are rising the weaker ISIS grows.

The one encouraging sign is that the Russian and US military brass are talking to each other more often than ever, even at the highest levels. There have been many reports to that effect over the last month or two — as well as signs of greater understanding between the two on the ground such as in southern Syria.

At the same time, the very fact there is a race for the Euphrates between them, rather than say, a joint campaign, shows the level of mutual understanding is finite. When the US was hitting the Syrian army in southern Syria in May–June the Pentagon was busy explaining the US was in Syria only to fight ISIS, and only because “the regime” was incapable of fighting it itself.

Obviously that was hypocritical since the reason that Syrian government was not in position to fight ISIS was because the US supported a jihadist insurrection against it, which for years was actually allied to ISIS. Even more to the point, even if those statements are taken at face value the circumstances have since clearly changed.

Since the start of 2017 the Syrian government army has reclaimed vast swathes of the country from ISIS, so that now only the province of Deir Ezzor awaits liberation. The Russian and Iranian-backed Syrian army is now probably perfectly capable of eliminating ISIS from its country without the Americans chipping away at ISIS-held Syria from the other side.

So why is the US still doing it? The answer I believe is bureaucratic inertia. Militaries are very bad at stopping doing whatever it is they’re doing. But that is very little consolation to Syrians who are seeing an increasingly large portion of their country gobbled up by a foreign great power and its local proxies.

Sure the proxies in question, while not the national army, are at least Syrian, but they are not Arab. Even by its own estimates the SDF is some 75 percent Syrian Kurdish. Plus, with its Arabs organized in dozens of different ex-rebel, tribal, and local groups, and the Kurds unified in the experienced, and disciplined YPG militia that figure actually overestimates the significance of Arabs for its fighting strength. This is borne out by video evidence, which time and time again shows the YPG spearheading all major SDF offensives. 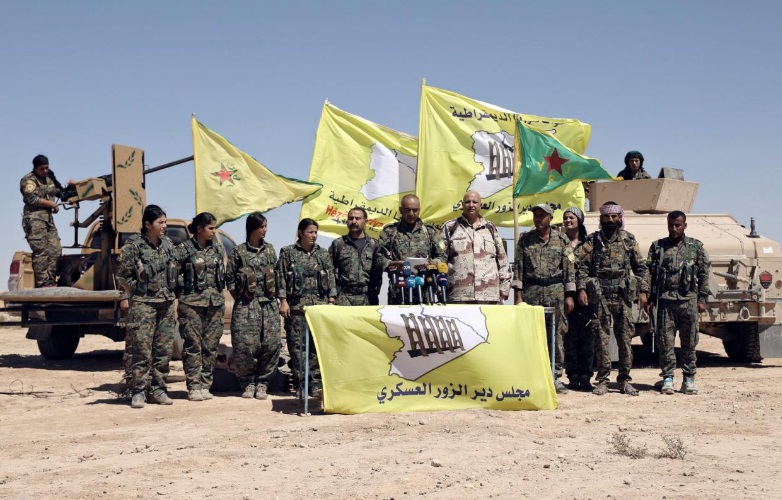 Reuters: “Ahmed Abu Kholeh, head of the Deir al-Zor military council which fights under the Syrian Democratic Forces (SDF), speaks during a press conference in the village of Abu Fas, Hasaka province, Syria, September 9, 2017.” — Even an event supposed to call attention to the Arab role in the SDF offensive can not pass without giant Kurdish flags

So now we are looking at a US-backed Kurdish political-military outfit moving into and taking over ever more Arab and Assyrian settlements. For sure the post-Marxist Kurdish leadership promises it has no interest in oppressing non-Kurds, and that in the future Kurdish-led federal autonomous subdivision of Syria that they seek, all these “minorities” will have all the national and civil rights they could possibly want. But history shows that such Marxist experiments never go far enough, and never actually satisfy the minority populations

There you go, perhaps the race for eastern Syria — or the “Middle Euphrates Valley” as the Pentagon likes to call it, to avoid calling attention to it being Syrian territory — ends up setting up a US-Russian clash, an army-SDF clash, or even an eventual Arab-Kurdish clash inside US-occupied eastern Syria, but hey. As long as the Pentagon gets to keep its fingers in a losing race for a while longer.