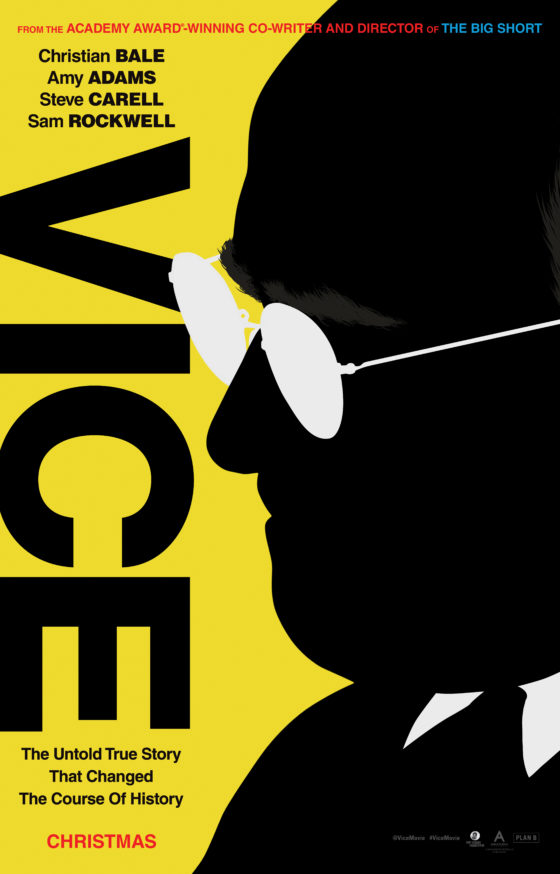 As a political junkie, I’m excited whenever my personal hobby enters the cultural mainstream. When the trailer debuted for Vice, a biographical comedy-drama following the career of Dick Cheney, I was ecstatic. A dozen of my friends must have messaged each other simultaneously to comment on how good it looked.

Imagine my friends and my disappointment to discover that it’s one of the worst films of 2018. I love going to the movies, it’s one of the little things I treat myself to. Vice is the 13th movie I’ve seen in theaters in 2018 and it ranks far below the others.

The sole reason for that is its director, Adam McKay. Known for directing Will Ferrell comedies and the 2015 hit The Big Short, McKay fails here as a filmmaker. The first rule of filmmaking is “Show, don’t tell.” Film is a visual medium, and a good director utilizes the tools of his craft to show a scene to his audience, who will then understand the subtle emotion, message, or plot that is imbibed in the acting, the dialogue, or the cinematography.

Vice is overlaid with a narration that’s almost as big a crime as the Iraq war itself. We’re introduced to a narrator, Kurt, who’s existence is wholly separate from the plot until the final minutes of the movie. It’s clear from the beginning that Kurt’s voice, smeared in between and over almost every scene of this over two-hour movie, is a stand in for McKay’s own commentary.

McKay is such an incompetent director that he feels the need to spoon-feed plot points, motivations, context, and exposition to his audience instead of allowing the actors to do their jobs and develop their characters. And the characters are the only bright spot of the film. Christian Bale is Dick Cheney. His performance is Meryl Streep worthy, his physical appearance, otherworldly. It’s some of the best acting of his career, and ironically, 2018. Amy Adams as Lynne Cheney is a strong performance and a good counterpart to Bale, although she’s sidelined in the second half of the movie. I loved Steve Carell as Donald Rumsfeld, and honestly, I would watch a whole separate movie starring him based on Andrew Cockburn’s biography. Sam Rockwell is a fine George W. Bush, although like Adams he’s given little to do in the second half. And Tyler Perry (of Madea fame) makes for a surprisingly good Colin Powell. They are diamonds in the rough, but it’s hard to justify mining through several miles of earth just to find them.

For a movie about Dick Cheney, Adam McKay feels the need to pull away from his main character and take pot shots at other aspects of the Republican Party platform. This includes deploring the end of the FCC’s Fairness Doctrine and the rise of FOX News, smearing Antonin Scalia, and villainizing the use of the term “death tax” to protect the inheritance of the rich. Libertarians aren’t spared either, since the Koch Brothers and the CATO Institute are included in the two-minute hate of the 1980s.

While the first half of the movie is Cheney’s rise to power, the second half is about the aftermath of 9/11 and any sense of overarching plot disappears. The movie becomes a hodgepodge of scenes that McKay throws together as he rants over them almost incoherently.

The causes of the Iraq War and the lead up are muddled and unclear. The Gulf War is skipped over, and we never see Cheney as Bush Sr.’s Secretary of Defense. We’re told that Cheney mapped out what oil companies would get which parts of Iraq before the attacks and that he saw them as an opportunity. In a national security meeting (where cabinet members ask who Osama bin Laden is, as if the 1998 embassy attacks or bombing of the USS Cole never happened), Steve Carell’s Rumsfeld argues with Powell and George Tenet that they should hit Iraq before Afghanistan. Cheney pulls the leash on him and its agreed the invasion of Afghanistan will proceed. Later, during a focus group, people say they’re confused about what al-Qaeda is, and why we can’t just invade a regular country. In response to this focus group, a dinner table of Cheney, Rumsfeld, Paul Wolfowitz, and Scooter Libby decide to invade Iraq. So, the invasion was an advertising campaign gone wrong? McKay’s editing is so choppy, and his narration interrupts the flow so often that this is the impression audiences are left with. The Office of Special Plans is mentioned in a blip, and it’s bombs away.

There is a long aside about Abu Musab al-Zarqawi, the Jordanian jihadist and leader of al-Qaeda in Iraq. It’s mentioned that al-Zarqawi was located northern Iraq and had met with Osama bin Laden. McKay “debunks” the connection by saying the two had a personal dispute because bin Laden’s mother was a Shia. It’s not explained how this is repaired or relevant, since al-Zarqawi did eventually pledge loyalty to Osama in 2004. And under McKay’s interpretation, it was the Bush administration’s emphasis on al-Zarqawi that made him “famous,” and he leaves the audience with the idea that he was the popular leader of the Iraqi insurgency.

There is no mention of the fact that al-Zarqawi was in the Kurdish region of Iraq (under American military protection for a decade) or that Saddam Hussein had a price on his head. The tactical disagreement between al-Zarqawi and bin Laden on whether or focus fire on the Americans or local Arab leaders is overlooked in favor of Osama’s mother. And McKay’s portrayal of the Iraqi civil war is wholly inaccurate. Al-Qaeda in Iraq was one of the smallest groups in the insurgency, one that got oversized publicity due to their graphic and murderous terrorist attacks. The Iraqi insurgency was a broad-based fight by the Iraqi population against the American occupying military force, and an sectarian war between Sunni and Shia about political control in Baghdad. There’s a chance that Adam McKay’s inaccurate explanations about Iraq could cause more harm than good for the antiwar movement.

Out of Oliver Stone’s presidential trilogy, W. is the weakest. But it still surpasses Vice in its telling of the Iraq War rationale, simply because Stone is a filmmaker head and shoulders above McKay. Stone is politically liberal, who also relies too much on the “war for oil” mantra, but he first realizes that a successful antiwar movement must be above left-right divisions, and second, he allows his characters room to breathe, explain, and talk among themselves. That’s why his situation room scene succeeds where Vice fails.

While Christian Bale takes on everything to portray Dick Cheney, so much is left on the table. McKay chose to tell the story in a non-linear fashion, which isn’t necessarily bad, but it does rob Cheney of transitional character development. In the beginning he’s portrayed as an alcoholic, punch-throwing power lineman who dropped out of Yale. After promising Lynne that he’d improve his behavior, next time we see him he’s a suit-wearing intern for the Nixon Administration under Rumsfeld. Wouldn’t it have been beneficial to see his transformation, or how he developed from a drunk to a deft political insider?

In the same vein, Cheney never has a deeper, overriding motivation. The narration describes his career as a “servant of power.” When he becomes an intern, Cheney says he’s a Republican only after he finds out Rumsfeld is one, and when Dick asks Don “What do we believe?” his mentor laughs and shuts the office door in his face. Cheney’s congressional votes are implied to be based on pleasing rightwing businessmen instead of coming from his own ideological center. Finally, in the closing scene of the movie, Dick Cheney turns to the camera (in a blatant House of Cards rip-off) and explains that he has no regrets and says he did what he did to keep the country safe from terrorism. This last scene shows a Cheney absent from the rest of the movie, one with beliefs and ideas about how the world works and how the United States should act. Wouldn’t it have been more interesting to see that character throughout the movie, one who is portrayed as coming to believe in empire instead of just a conception of power?

Few movies are without any positives, and Vice barely jumps that hurdle, beyond the stellar cast. The movie does a good job of explaining the roles of David Addington, Scooter Libby, and how Cheney’s crew infested the different offices of the Executive Branch. Douglas Feith and Lawrence Wilkerson make brief appearances. McKay goes about it in the lazy, ham-fisted fashion he directs the rest of the movie, but if you’re familiar with these less than famous personalities, you’ll get a smile hearing their names and seeing them included in such a major picture. Rumsfeld describing how small conversations in ugly little buildings in DC can change the world (for better or worse) to a young Cheney is well performed without unnecessary commentary.

And I must bring attention to the only ounce of talent McKay adds to his profession. As Sam Rockwell’s Bush reads a speech to the American people from the Oval Office about bringing democracy and freedom to Iraq, the camera pans down behind the presidential desk to reveal Bush’s nervously shaking leg. The scene cuts to inside a house in Iraq, as a family huddles under the kitchen table as bombs explode outside their home. The father’s leg shakes just like Bush’s. This subtle takeaway almost makes up for McKay’s pointless, artsy inclusion of a Shakespearean dialogue between Dick and Lynne Cheney, the explanation of civil liberties abuses as a restaurant menu, or when in a faux scene Cheney proposes to President Gerald Ford and National Security Advisor Henry Kissinger that they put tiny wigs on the tips of their penises and pretend they’re puppets.

If one message is imparted by this movie, it’s that Adam McKay hates Dick Cheney and every facet of the Republican Party. If one message is imparted by the mid-credits scene of this movie, it’s that Adam McKay hates every Republican. We’re ushered back into the focus group, as an obese man in a sports jersey says the movie we just watched was liberal propaganda. Another focus group participant says the movie was fact-checked. The first accuses the second of being a “libtard” who probably voted for Hillary. The second refers to Trump as the Cheeto-man in the White House, and the first sucker-punches him.

Adam McKay sought to make a movie about Dick Cheney where he could shout at his audience rather than making a watchable film. He’s more interested in expressing his hatred for all Republicans (including ones that opposed the Iraq war) than making a bipartisan movie for peace. Vice isn’t worth watching beyond select scenes that’ll be on YouTube in a couple months, and it certainly isn’t worth paying for.

Joseph A. Schumpeter, Outsider Looking In