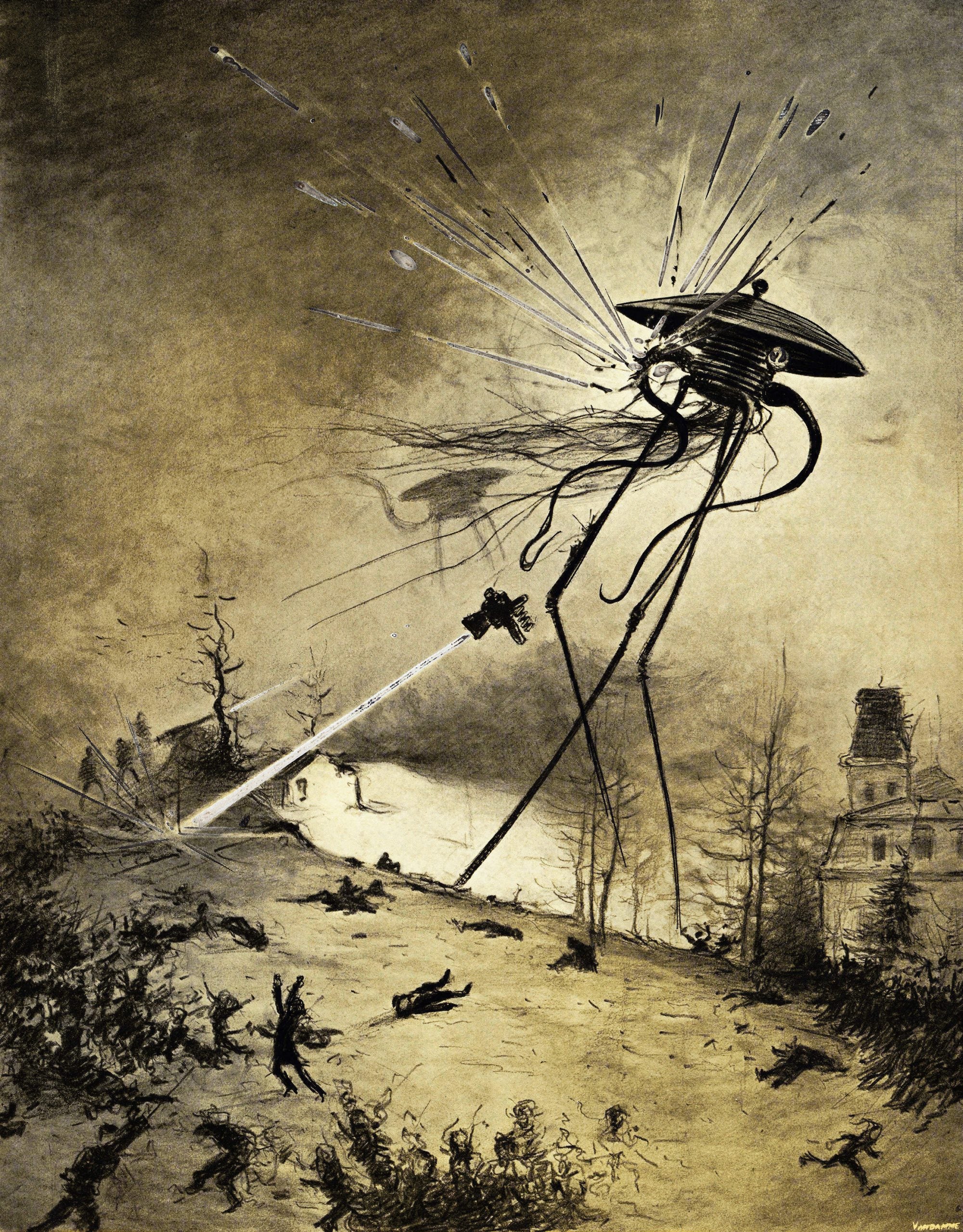 In the H.G. Wells classic movie War of the Worlds (the 1953 original, not the trash Spielberg 2005 version) Martians invade Earth and vaporize an unprepared humanity. We’re introduced to our protagonists, who are post-war atomic scientists living in Southern California and working for the nearby Pacific Institute of Technology (Cal Tech?). Like in the book, the most advanced weaponry is thrown at the Martians (including the atomic bomb) to no avail. The ending of the movie is almost apocalyptic as Los Angles is being systematically obliterated and its citizens turns against the “scientists.” An angry mob descends on the Pacific Tech trucks as they move experimental hardware developed from a captured Martian probe to a new laboratory. Dr. Clayton Forrester, his USC librarian love interest Sylvia Van Buren, and colleagues seek refuge in a Church with fellow Angelenos. The geniuses are now reduced to shelter with the superstitious uneducated masses. As they sing hymns, the Martian ship crashes and like in the book, the movie’s narrator observes that while the Martians were impervious to humanity’s weapons, they had no resistance to bacteria.

Given the almost daily dose of conflicting studies on COVID-19 vaccine efficacy on evolving strains, rapid mutations, statistical evidence, or regarding masks and social distancing perhaps a remake is again in order—with a few changes.

The original started with a narration by Sir Cedric Hardwicke; Shakespearian actors have such gravitas in their voice. Perhaps Patrick Stewart is available?

In the third decade of the twenty-first century, He/She/They/Them had mapped the human genome, mastered genetic engineering, created intelligent systems, and put in the hands of almost every human a smart device, each containing billions of transistors, capable of global communication and information transmission/reception in both audio and video form. Traditional “gatekeepers” of truth were rapidly losing their hold on the peoples of the Earth.

But greedy eyes were watching the human race. Driven by age-old human ambition and a desire for glory, modern Frankensteins decided to create a monster to fight possible monsters. But hubris and arrogance unleashed a monster virus. These same scientists and the government which funded them did what all bureaucrats do when something horrible goes off on their watch: they deny any responsibility. They overreact in ways that are not productive and create unintended consequences. They double down on unsuccessful solutions. And finally, as their start to lose public confidence, they find a scapegoat.

As the virus spread and mutated into more virulent forms, the scientist’s technology failed them. They launched their “atomic bombs” with limited affect, perhaps stimulating more rapid mutations. They double downed on questionable but government required actions like masks and social distancing. The unintended consequences of shutting down schools and work and flooding the country with trillions in printed currency was not completely understood or thought important. Not losing the public confidence was the objective. Victory over the monster was just around the corner if people just obeyed them. Like the emotionless Martian invaders, the human condition was not that important to the narrative. Government officials became celebrities by sending the infected elderly back to nursing homes, infecting and killing thousands. Any questioning of government was met by aggressive and unethical attacks by the corporate media. Official state policy demanded complete obedience despite unproven efficacy. Millions died to protect careers, political elites, grant funding, and reputations.

Finally, people of the mind—physicists, chemists, medical doctors, and engineers—started to question the “scientists,” government, and corporate media propagandists. They understood the monster unleashed could not be defeated by man’s hubris but by our own evolution. The human immune system is hundreds of thousands of years old. Natural immunity, not “leaky” vaccines demanding “boosters” every three months, was the only solution. This was the solution that had saved humans through the worst plagues. After years of failure, modern science focused on treatments when infected-this was the path to victory.

The monster had defeated the “scientists.” Their “atomic bombs” failed. The monster defeated government and the corporate media. Creating monsters to fight monsters killed millions of people. Whether there will be justice is not yet known.”

Should be a great movie. But funding might be a problem. Perhaps Dr. Fauci could use the billions in grant money he manages to invest in the project. We’d even make him an executive producer!