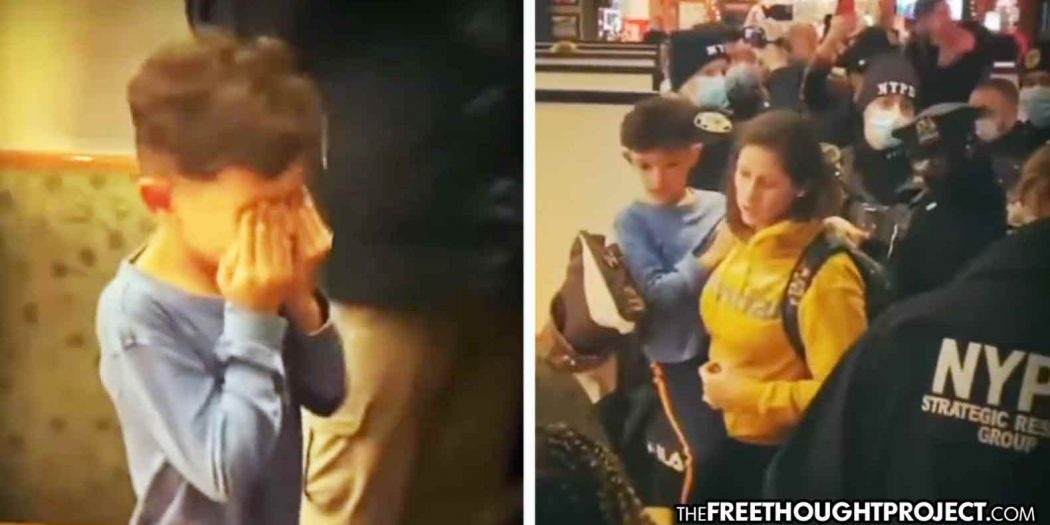 As TFTP reported, earlier this month, New York mayor Bill de Blasio expanded the already-tyrannical “Key to NYC” program which imposed a vaccination mandate for workers and customers at indoor dining, fitness, entertainment and performance venues. Anyone who wished to enter a public place would first be required to give that place a glimpse into their personal medical records by providing proof that they had taken a covid-19 vaccination.

Beginning last week, this discriminatory and unscientific practice was expanded to include children, ages 5-11, who are now also forced to show proof of vaccination to enter public places. Now, as the video below shows, that chicken has come home to roost.

“New York City will not give a single inch in the fight against COVID-19. Vaccination is the way out of this pandemic, and these are bold, first-in-the-nation measures to encourage New Yorkers to keep themselves and their communities safe,” said Mayor Bill de Blasio. “From workplace mandates, to $100 incentives, to mobile and at-home vaccination offerings, no place in the nation has done more to end the COVID era. And if you have not taken this step yet: there’s no better day than today to stand up for your city.”

Apparently, Bill hasn’t been looking at the data and reading the headlines from across the planet showing that places even with 100% vaccination rates are experiencing massive surges in COVID-19—including New York City which currently accounts for 10% of all reported cases in the entire country—despite their construction of a covid police state.

Nevertheless, the government is carrying out the tyrannical mandate and now cops are going after children. In the video below, a little boy is traumatized as cops swarm him and his mother in a New York restaurant for trying to eat dinner without showing papers.

It wasn’t just one or two cops who responded to the scene. Over a dozen cops were dispatched to deal with an innocent little boy and his mother who dared to grab a bite to eat without publicly displaying their personal medical history.

Just two years ago, a scene like this would have shocked the world. If a mother and child were swarmed by a dozen armed agents of the state and kicked out of a restaurant for failure to make public their medical history, news agencies worldwide would have run this story.

Now, however, this is common place in the land of covid dystopia. As you watch the video below, pay attention to the woman filming. She continuously asks the cops if this is what they signed up for.

Obviously, these officers couldn’t care less about what actual justice looks like. They are merely “doing their jobs,” and blindly carrying out the orders handed down from the tyrant class.

If you support treating people this way for their personal medical choices, you deserve the hellish police state that will inevitably ensue. The pro-vaccine passport camp thinks they are safe right now because police are enforcing what they want.

Sadly, however, their ignorance of history leaves them oblivious to the fact that government never relinquishes power and freedoms are never returned once surrendered. It is only a matter of time before the ones who advocate such authoritarian segregation fall victim to the very policies they cheered for when it benefitted them. You’ve been warned.

What a lovely new world we are living in when you go out for a meal and a squad of police barge in, persecute a little boy then demand to see everyone else’s papers. This is the vax passport world so many are begging for. #NotAboutAVirus #NOVAXPASSPORTS pic.twitter.com/ZQFnybs4ly